After a bit of a stretch between patches, Riot has finally officially announced its next round of tweaks, additions, and cuts to its popular MOBA League of Legends. On top of your run of the mill bug fixes and balance tweaks, the foundation is being set for the brand new character select suite. It comes just in time for the new Ranked season to start in this patch. There's also some new items and some mastery tweaks, but we'll get into that in a second. 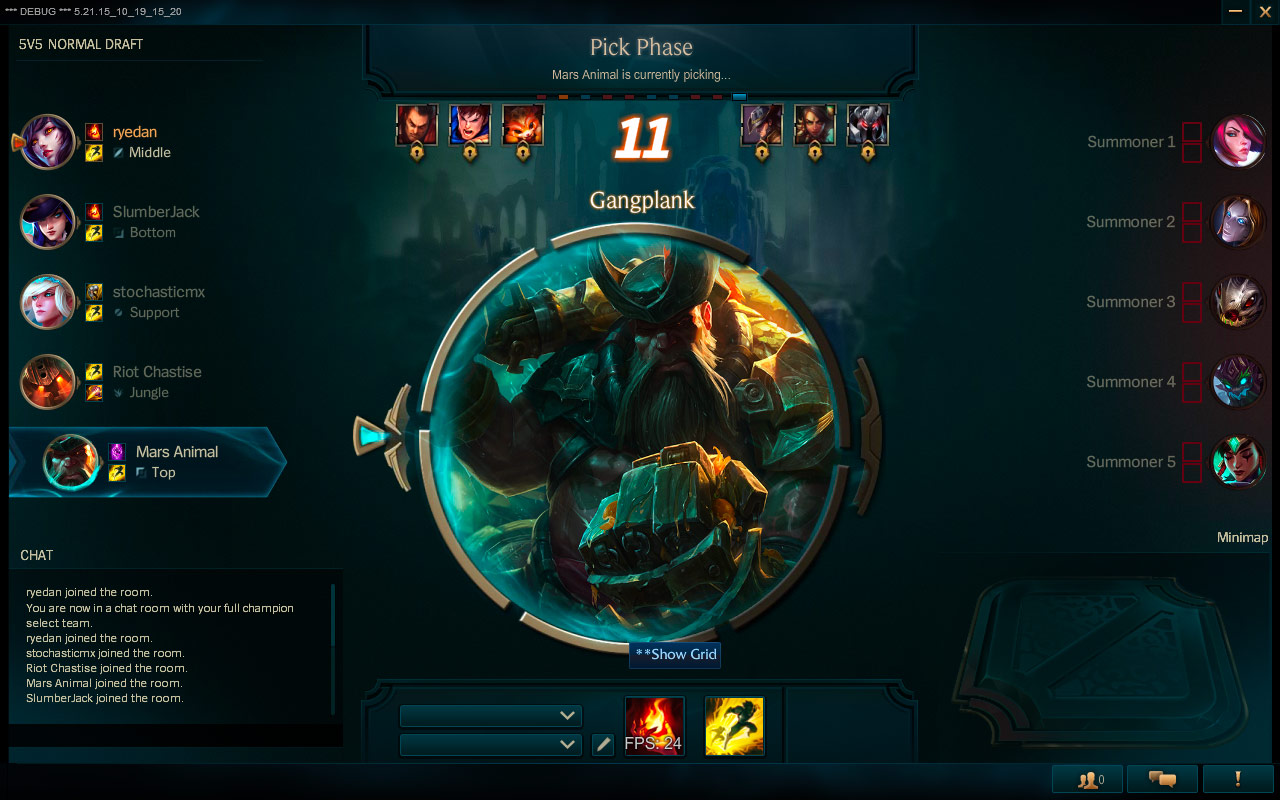 The biggest news from this patch is the new champion select mode.  It takes elements of Team Builder, Draft, and Blind Pick and combines them into one, do-it-all client. When it comes to changing the way the game is played, Riot rarely looks into fixing things on the champion select side, but when they do it's often in major ways (like when they first introduced Team Builder a few years ago).

The new champion select asks players to pick both a primary and secondary role from the outset. This hopes to ease queue wait times by increasing the amount of positions the matchmaking code can slot you into, without you being too disgruntled. You'll be able to focus on two positions throughout the season, if filling isn't really your thing. If it is, then there is actually a fill option for you to pick as a secondary role. Picking your role and position this way doesn't restrict more outside-the-box play styles, so if you want to lane switch you are free to do so.

Once a match is found, you're assigned a spot with the rest of your team. The team chat will appear here, and now you can begin formulating some sort of plan with the others. If you had a comp idea, or wanted to talk picks and bans, now is the time to start. While we're on the subject, pick intent is a new screen that will follow just after position assignment, where teammates can express their interest in particular champions. Here is where the comps start to come together. It also shows the team which champions you'd rather not see banned.

Bans still happen before picks, but who gets to ban has changed. Instead of a team captain being in charge of swinging the Banhammer, the members of the team with the last three pics do. This is a bit more democratic, and it empowers the people with the less optimal pics to still affect the game in a big way before you hit the Rift. The top two picks now become hugely essential when trying to nail your comps. This may also mean that many of the champs you see get almost auto banned will start creeping back into Ranked play. Time to get your counter Mordekaiser strats in order.

One casualty of the new champion select is Team Builder. Since this new project does everything Team Builder did (and hopefully better), having both would be redundant. Ill miss it, personally. It's the only place I was able to play champions that would immediately get banned, and the normal mode position wars are a loathsome experience.

The old Runeglaive enchantment has been changed into Runic Echoes, with the hopes to appeal to a broader range of ability power champions. With Hunter's Talisman in place, there is a more dedicated base for AP junglers to start in, but the tier 3 options were limited in their late game appeal, besides just being number stacks. Echoes hopes to add more flavor to the burgeoning AP jungler menu.

I'm a pretty big fan of the movement speed bonus, as the best AP junglers use mobility as their real defense (like Diana). Instead of building some sort of dedicated defense, I'm more inclined to just get faster, and now there's an early build item that helps that. 60 AP is a step up from Runeglaive's 40 AP. The Luden's Echo-esque passive for jungle monsters really helps speed up a process that hasn't really been that friendly to non-auto attackers.

Will this make AP junglers second guess the Lich Bane? Maybe not, but I think there definitely needed to be a strong AP item that stood well under the same scrutiny Cinderhulk and Devourer endure. And coupled with the fact that all Tier 2 items are getting a gold discount and a big mana regen boost, I think everyone can be happy with this alternative.

Besides sliding some of the jungle item numbers, there have been good deal of re-balances targeting other popular equipment picks. Frost Queen's Claim got a bit of a nerf, citing its high mana regen and the range/duration of the slow from the icy (spooky) ghosts active as the cause for its sudden ubiquity. It's not a wildly inaccurate claim, considering that you can find a dozen YouTube videos about why FQC is the new go-to midlane item.

Sunfire Cape got a slight armor buff, putting it back in line as an acceptable armor choice among its particular niche of tank items that include Randuin's Omen and Dead Man's Plate. Now its less about simple stat efficiency, and more about analyzing the passive/actives to suit your play style. I have a hard time believing that a simple 5 point armor buff will be enough for people to start choosing this over DMP or Omen if they weren't already wearing the Cape to begin with. This seems more like a reward for the stubborn diehards or risky builders than a convincing argument to swap Sunfire into builds in the others' place.

The Hydras are cheaper now, in an effort to ease the building process a smidgen. So is Tiamat, which is welcome. I think those items are pitch perfect Juggernaut items, but at 3600 gold, it was moving into Trinity Force territory. Why stop at a Hydra, when I can wait a minute or so and grab the best all around item in the game? Now the "Keep calm and rush Trinity Force" technique is a little less flawless.

Many of the Zeal-based items have been touched up to better represent Zeal's movement speed unique ability as part of the big picture recipe. Practically speaking, items that use Zeal like Phantom Dancer and Runaan's Hurricane all found their movement speed bonuses buffed, while Rapid Firecannon took a tiny hit in movement speed to make it even next to those options. Statikk Shiv does a bunch more damage to minions, making it a better wave clearing option and making those Jinxes way more annoying.

For the full list of changes coming with patch 6.1, including the new Ranked season and champion rebalances, check out Riot's blog post. Let us know what your most excited for on our Facebook page or on Twitter @CurseGamepedia. Also, keep up with the pro scene and the latest in-game changes at Leaguepedia.