Oh, you think you're a hardcore RPG gamer with a knack for surmounting impossible odds? Allow me to introduce you to my friend Darkest Dungeon, Red Hook Studios' digital ode to the maddening darkness of Lovecraftian prose, and one of the most brutal experiences you'll find in gaming this year. After returning to the estate of your ancestors, it's your task to wrest it from the overgrowth of decay and darkness that's taken it, and restore it to its former glory. Now that it's finally out of Early Access, it will hit the open market ready to beat down the hold outs and gaming stalwarts just like you. I believe in your abilities, Gamer, but here's some advice that I think you'll appreciate.

At no point during any of your trips into the dungeons should you venture without a dedicated healer of some sort. When the going gets tough, they will be the only people around who can effectively counteract the devastating damage your team's minds and bodies will take. Vestals and Occultists are the best options for that, and picking one is the closest to an "auto include" you can have in Darkest Dungeon.

Having a good front line force is key as well. There are assorted options for a good front bulwark, but my favorite has to be the Crusader.  Their potential suite of defensive buffs, stuns, and minor heals makes them great damage sponges and secondary medics. If pushed to the back of line by enemy abilities, they can literally throw themselves back to the front of the pack. These versatile warriors won't steer you wrong.

As far as dealing raw damage is concerned though, your options are almost as vast as the front liner. I personally like the Bounty Hunter for its particular mixture of high damage abilities and displacement effects. The Leper's all-or-nothing style can really put a hurting on the creepy crawlies you'll encounter as well, and often plays the middle of the road selection between damage and tank. 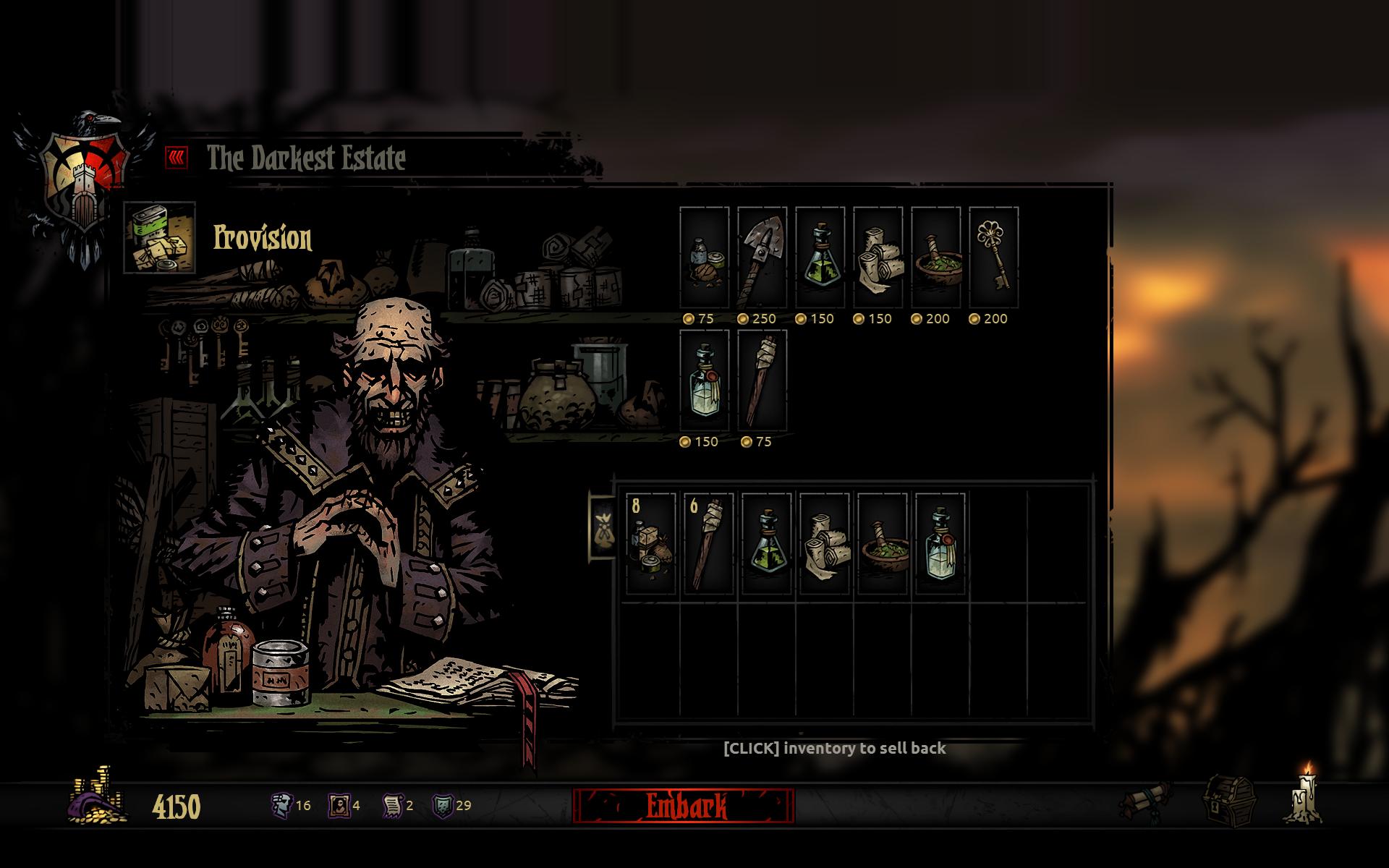 Prepare Based on Your Destination

The rest of your options are all a little stranger and come with their own quirks, but can be fun for experimentation and surprising you with the sort of performance they can muster. Outside of the Healer and Tank/Damage roles, your last couple slots should be influenced by the sort of enemies you can expect to face. If you're going to face things like the undead, bringing characters like the Plague Doctor or the Hellion might be ill advised, since they tend to lean heavily on Blight and Bleed effects - something the undead isn't super concerned with. Hellions can heal themselves of blight and bleed, though, so don't rule them out when making your picks, as they can be self-sufficient death machines under the right circumstances.

That being said, when heading to places like The Weald, a Plague Doctor (and her Battlefield Medicine) is a great pick. Besides being a good pick overall, Crusaders excel in the Ruins thanks to the very low holy resistances of the monsters there.

Outside of party composition, the Provisions you're choosing to bring with you need to be well suited for the unique challenges you'll face. Medicinal Herbs are an absolute must in The Cove thanks to the high number of debuff traps and curios there. You don't need to buy so much food when hitting The Warrens as there is plenty to be found, but be sure to pack extra bandages, because the monsters there love to make you bleed.

This game is hard enough, take every advantage you can. 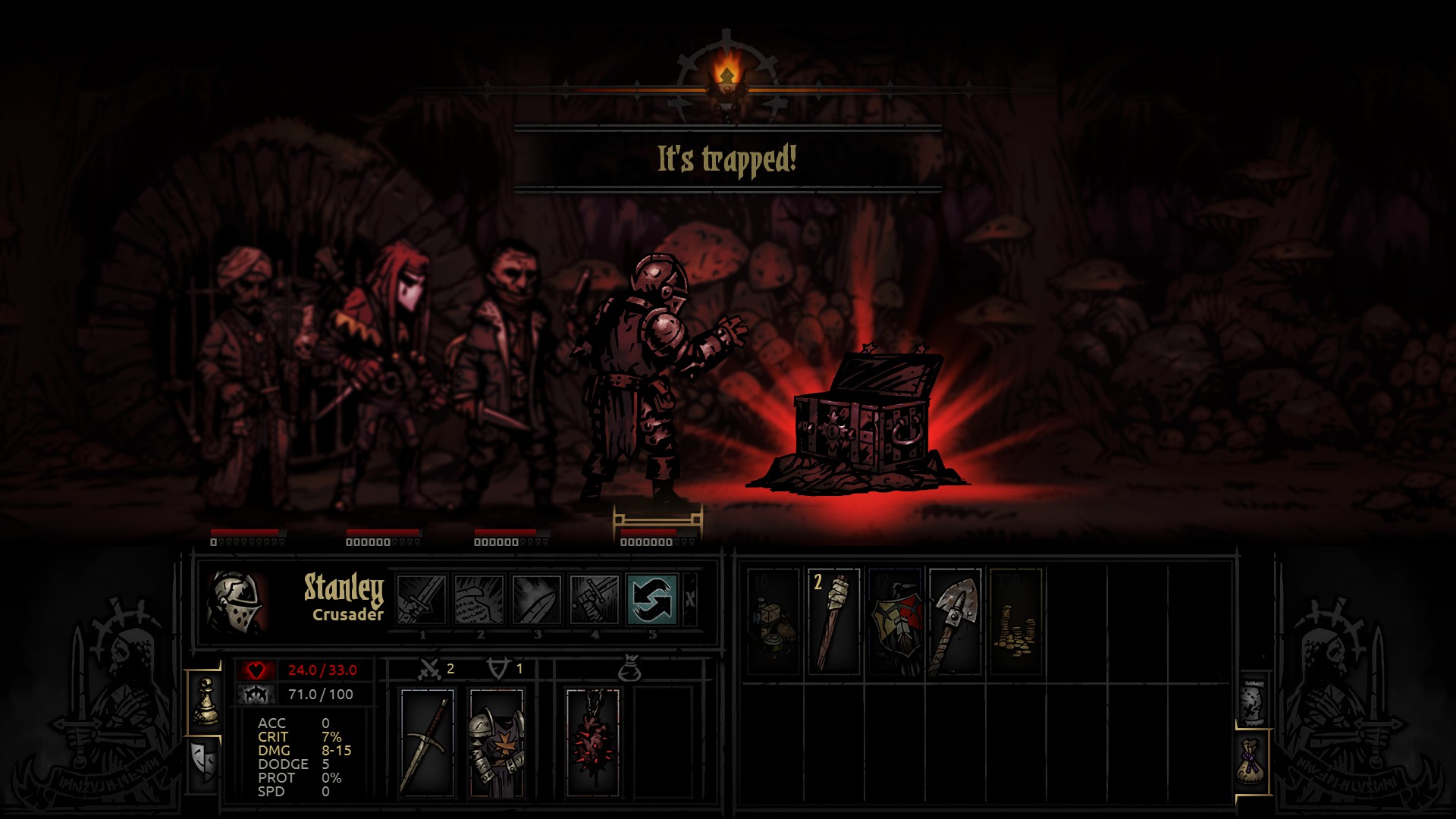 Don't Touch Everything You See

Look, I know dungeon crawling RPGs are all about exploration and discovery. Scouring every nook and cranny of the uncharted depths of some dark alcove is the stuff gamers dream about. In Darkest Dungeon, the things you find in seemingly harmless piles of books or armoires is often the stuff of nightmares.

Each of these little events - curios, they're called - have particular requirements to activate them safely. Sometimes it's having the right item, like Holy Water for Eldritch Altars. Other times it's having the right sort of hero interacting with the thing. Either way, if you don't know how to activate a curio safely, you're better off not attempting at all. The consequences are usually stress damage, but can also be health damage. Stress is the last thing you need slipping just because you really needed to know what was inside of that Confession Booth.

This goes for trinkets as well. These equippable items grant a stat bonus at the expense of some other stat, and it's very important for you to know the best ways to make the most out of these bonuses/debuffs. You are making a big mistake if you're just throwing trinkets on without considering the negatives, and you will miss that stat the most when your party crumbles into a slow, agonizing pile of fail. 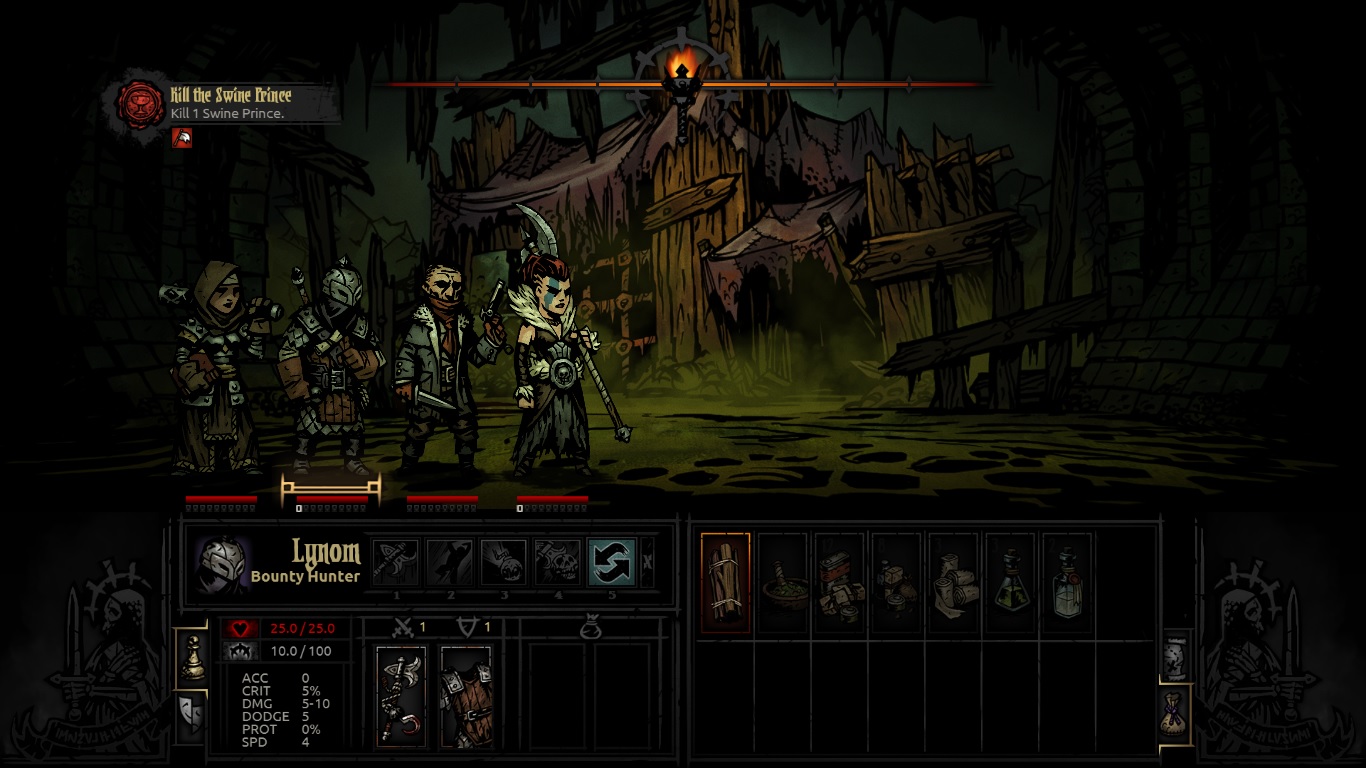 Maybe the most unsung/important system in the game is the Light Meter. At its brightest, your heroes are at their safest. Monsters are as easier, you can surprise them more often, and you will suffer less ambient stress damage while exploring. You can even scout more effectively. Light is love. Light is life.

As it dims, monsters will start surprising you and begin gaining buffs, and you will take more ambient stress damage. These can be terrible omens, often making your current journey one of those "any encounter could be my last" sort of adventures as the meter reaches its lowest.

There are good reasons to travel in the dark, though. You get much more valuable loot when it's dark, making "dark runs" wildly more lucrative then your standard dungeon dive. You also crit more often in the dark, meaning the right party can actually be MORE effective under cover of night. This takes practice, and is only recommended for people who have some significant experience in Darkest Dungeon (i.e. someone who doesn't really need this guide.)

"Darkest Dungeon is a game about making the best of a bad situation." The opening title card has the most important piece of advice to keep in mind. Darkest Dungeon is, often times, a comedy of errors. Things rarely go well during dungeon runs. Progress can be stiflingly slow and and leave players with the same hopelessness and frustration that their in-game heroes can go through. Red Hook Studios doesn't just give you lemons; it sticks razor blades in them and throws them at you.

That doesn't mean you still can't make lemonade. Part of coping with the rigors of Darkest Dungeon is understanding that victory isn't always completing a mission. Sometimes, it's just making it out with some treasure and a living, if not insane and battered party. Suicide runs to the end of a dungeon will likely net you a total party wipe, leaving all of the gold, items, heirlooms, etc. in muck and mire, where it will be lost. If you're sitting on a decent treasure horde and the trek to those last two rooms looks risky, just abandon the quest. Your party will gain some stress, but they will be alive and you will have you will have the means to restore them and ready your provisions for a more potent run next time.

When you've got the swing of this, be sure the pass the help along and enter our Darkest Dungeon Wiki Editing Contest, where you can win some sweet loot by sharing your Darkest Dungeon knowledge with the rest of us. Let us know how you're doing on Facebook and on Twitter, and good luck restoring your families honor!