Now that Red Hook's devilishly difficult turn based RPG, Darkest Dungeon, is officially released old players and new players alike are clamoring to their computer screens to jump into the madness. As a game that involves taking small groups of heroes with different functions and making them greater than the sum of their parts, it's easy to make assumptions about what you should expect, character wise. Luckily, Darkest Dungeon makes that pretty difficult, as their Heroes deviate from your standard fantasy archetypes in pretty significant ways.

Don't fret though, this guide keeps that in mind. It won't be a super in-depth look at these character's statistics, but a gloss over of the important things to understand about each. Hopefully this will serve as a good starting point to help you more scrupulously decide who draft from the Stage Coach, and who to send packing. 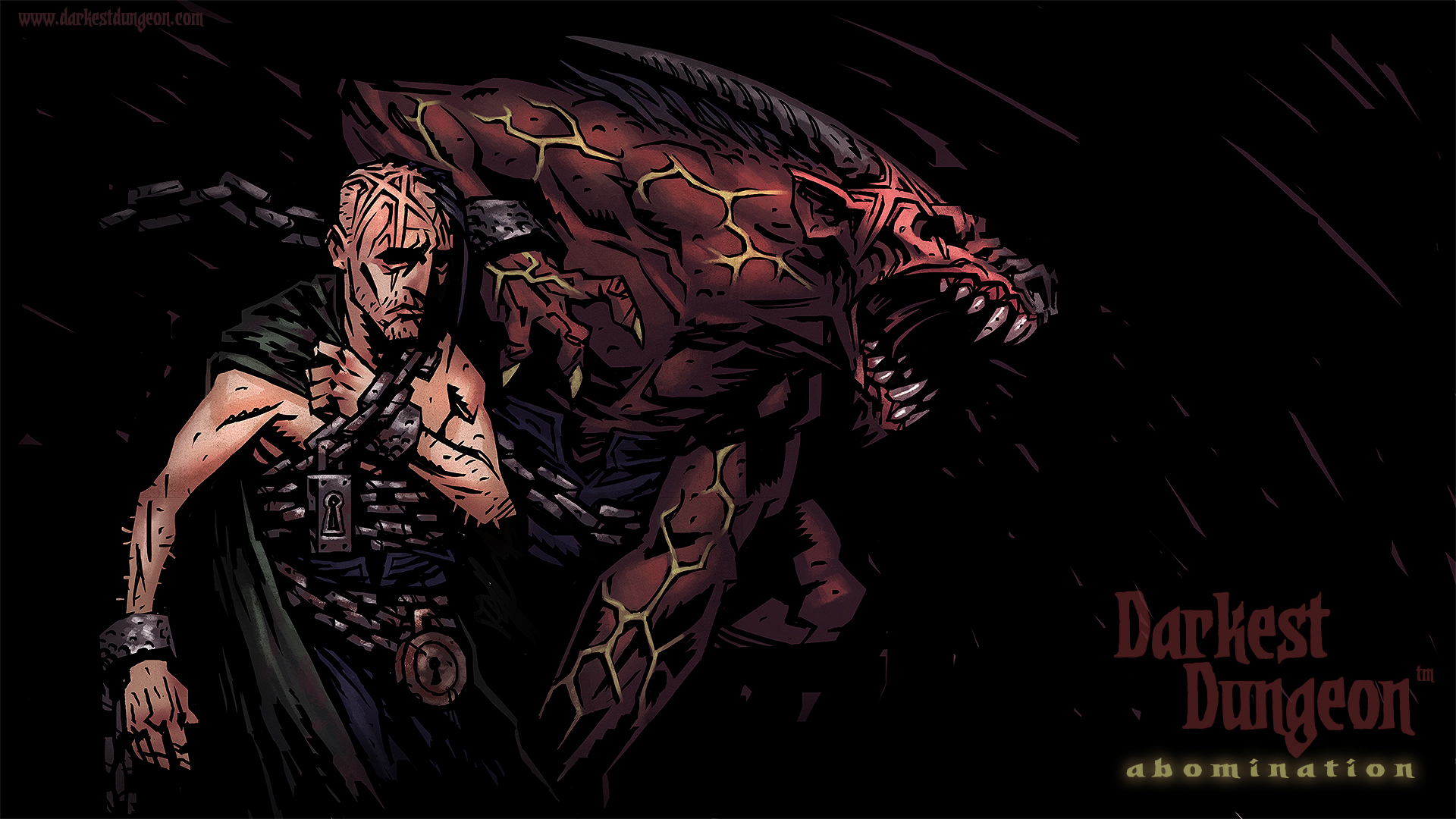 There is no hero like the Abomination. All of his abilities are unlocked at the start, because he has two forms. His normal human form is great, but the moneymaker is his transformation into the monster. While you're the monster, you're incredibly fast, and you CRIT very hard. Pairing him up with a Jester, who can use buffs to make him quicker/stronger - is a great idea. Be very wary, as the Abomination will cause stress to the party around him gradually, and some heroes won't actually join a party with him in it. 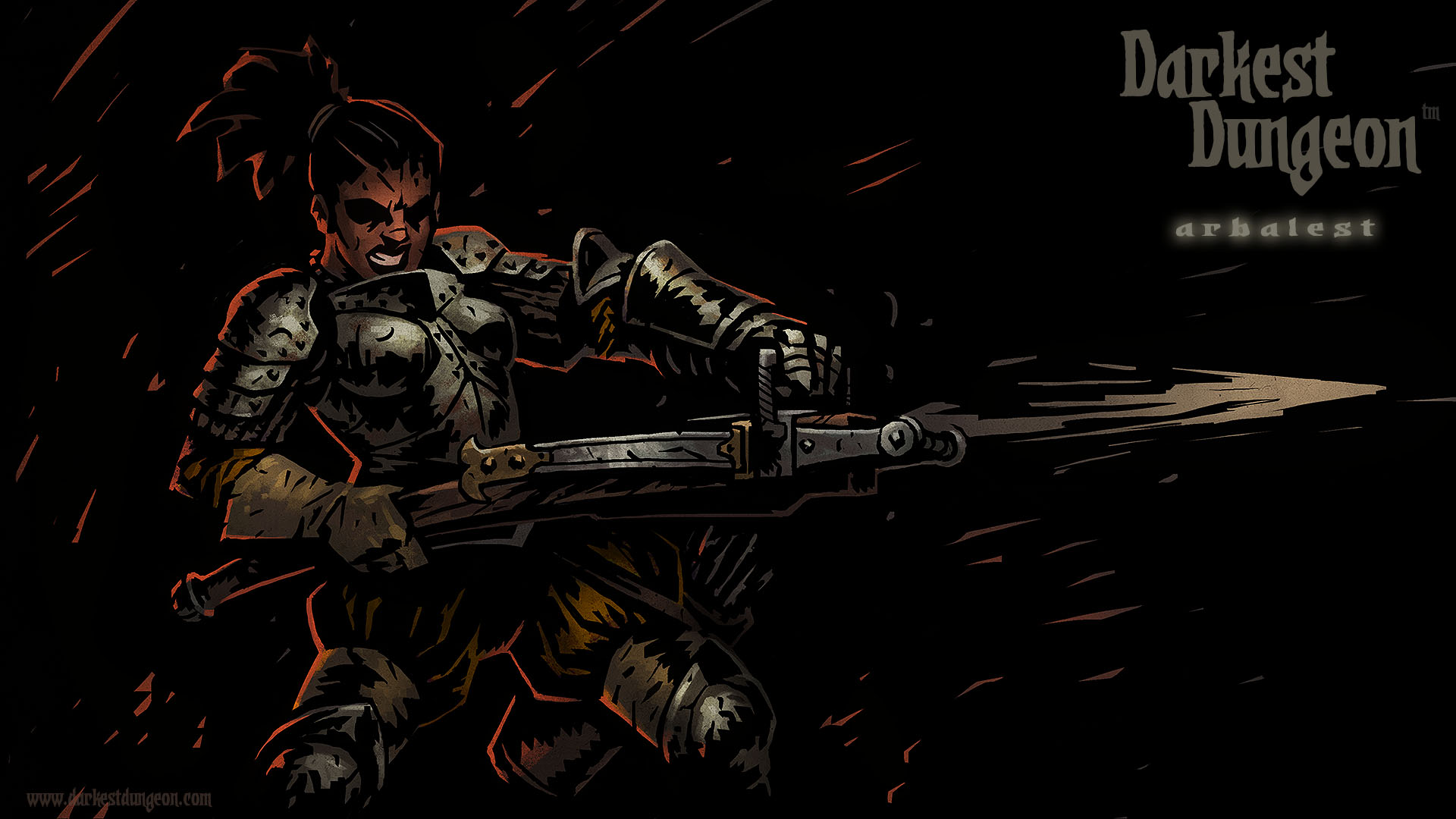 The Arbalest is a dedicated back line assassin with a knack for taking monsters down one at a time. Her baseline damage isn't overwhelming, but the bodies will pile up quickly when she's given the right circumstances. She also dabbles in crowd control, and can buff allies reasonably well.

Sniper's Mark marks a target and Sniper Shot gets 5% more damage against said marked targets. Bola hits both position 1 and 2, and has a chance to knock them back 1. Battlefield Bandage is both a nifty little heal and a buff that makes the target receive 20% more healing for a few rounds. 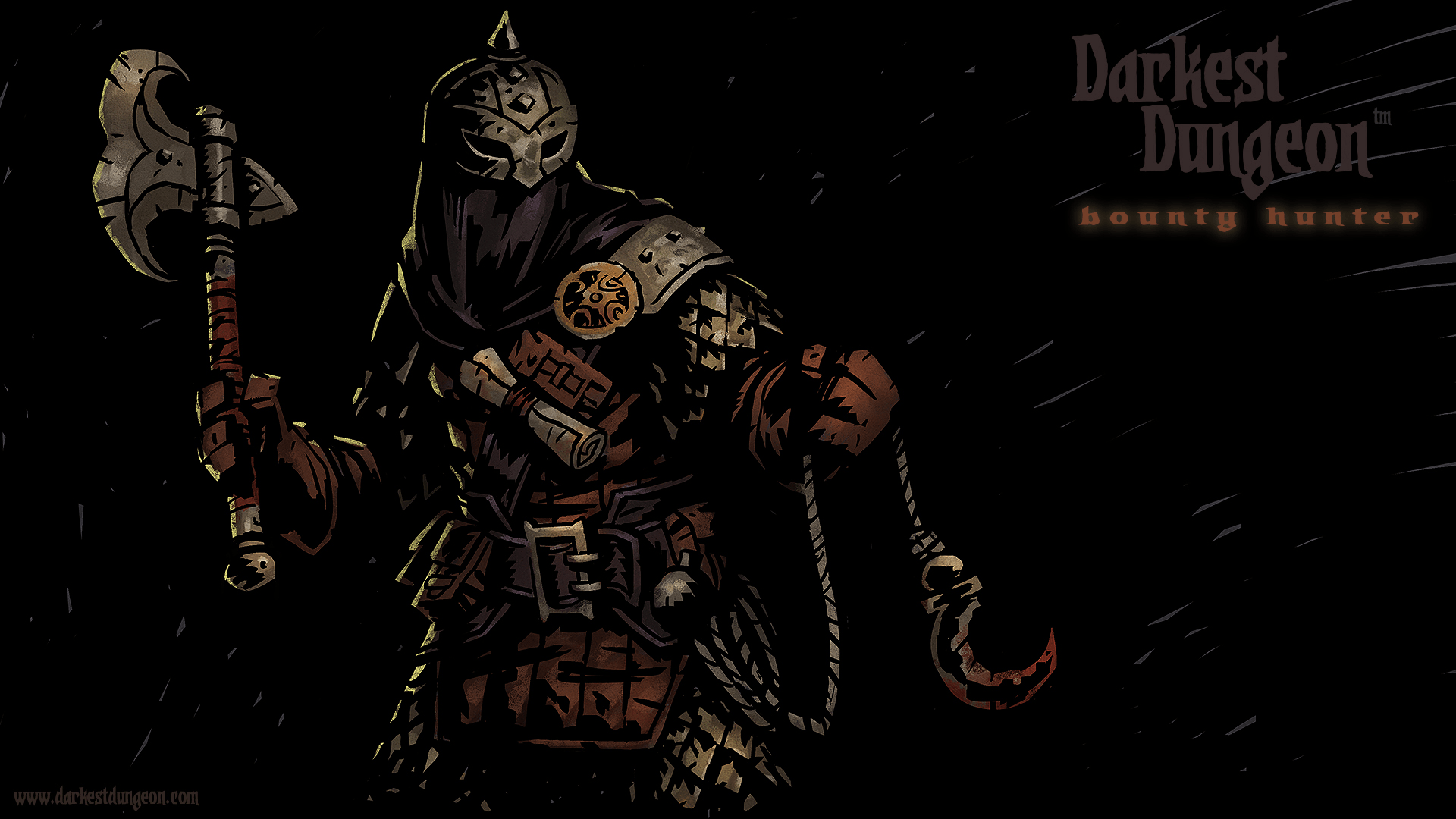 When it comes to mangling single targets, you could do much worse than the Bounty Hunter. He isn't the offense dervish of a Highwayman or a Hellion, but he can can shuffle opponents around and put them in harm's way reliably. When enemies are marked or stunned, he really shines. His camping skills are pretty formidable as well.

Mark for Death/Collect Bounty and Flashbang/Finish Him! synergize in similar ways - one attack puts a debuff on the target, the other does extra effects and damage when hitting targets with that debuff. Come Hither and Uppercut are good for pushing and pulling. 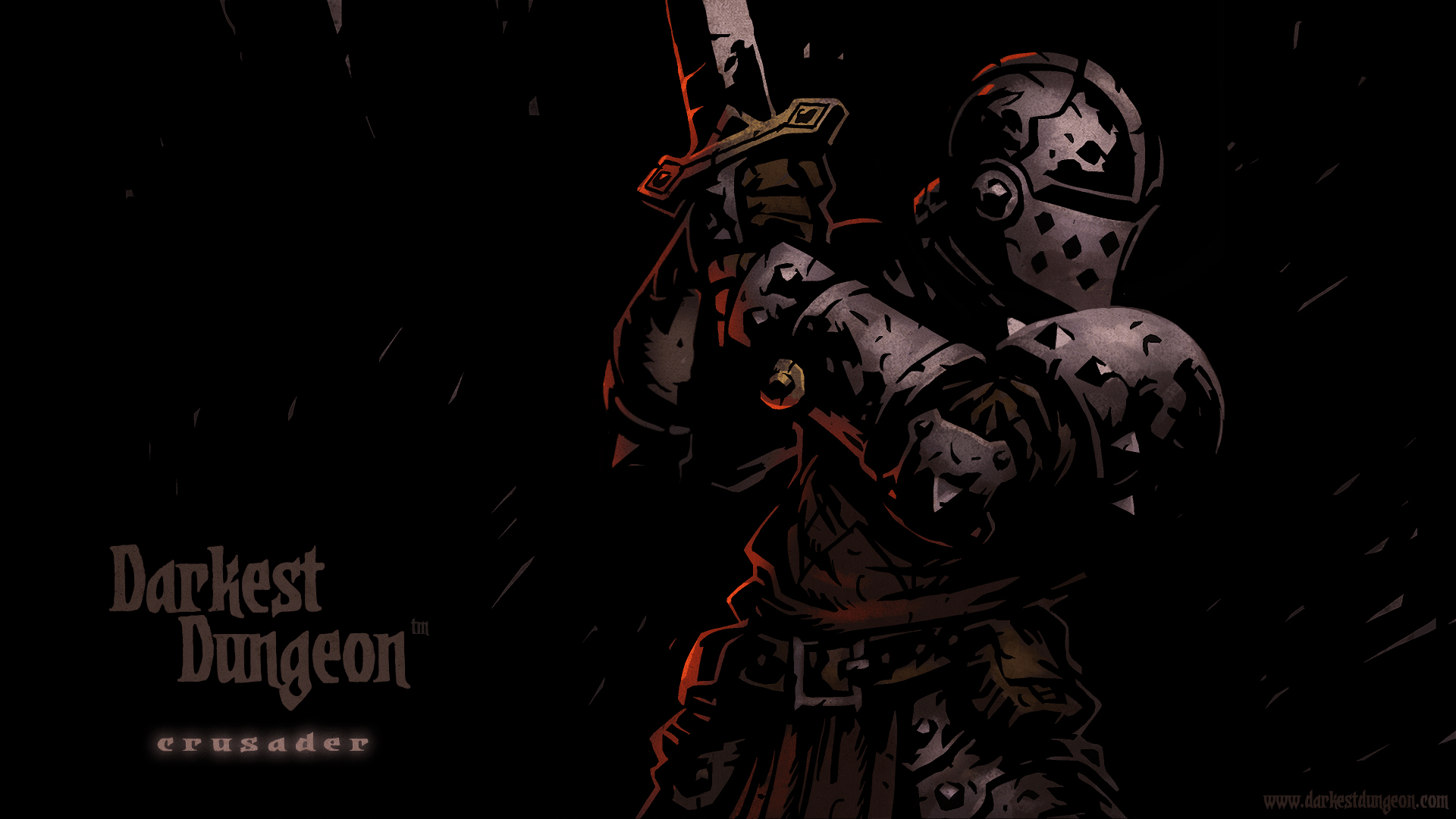 A literal knight in shining armor, the Crusader wades into combat with the hopes of combining his physical abilities and his odd magical abilities into an effective offense. How effective a Crusader is really depends on where you are, as his abilities really tailor him towards fighting unholy enemies more than any other monster type. With some trinket trickery, you can make a Crusader a very fearsome stun generator. 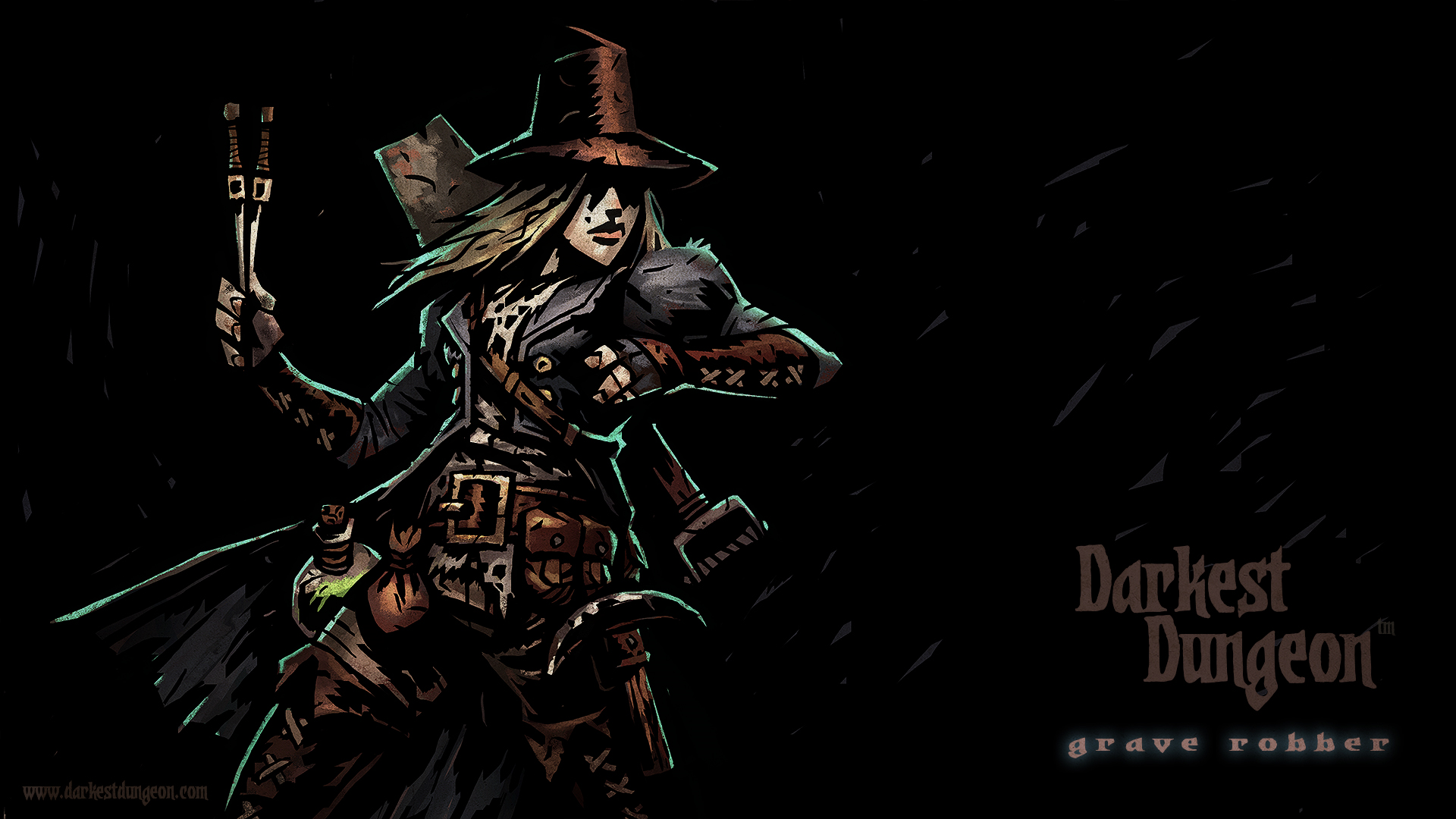 Spry and versatile, there's never a position where the Grave Robber can't do something semi useful. While none of her abilities are all that impressive on their own, she can become a great jack of all trades character to pull off of the bench when you need to give the A team a rest. She scouts pretty well in camps, and can remove stress from the entire party, which is key for those long dungeon dives.

Lunge throws the Grave Robber into the fray, doing pretty good damage but moving her forward 2. Shadow Fade allows her to step back 1 and stun the enemy in position 1. Thrown Dagger does decent damage and makes it easier for characters to bleed her target. Flashing Daggers hits both of the middle positions, and can CRIT fairly well. 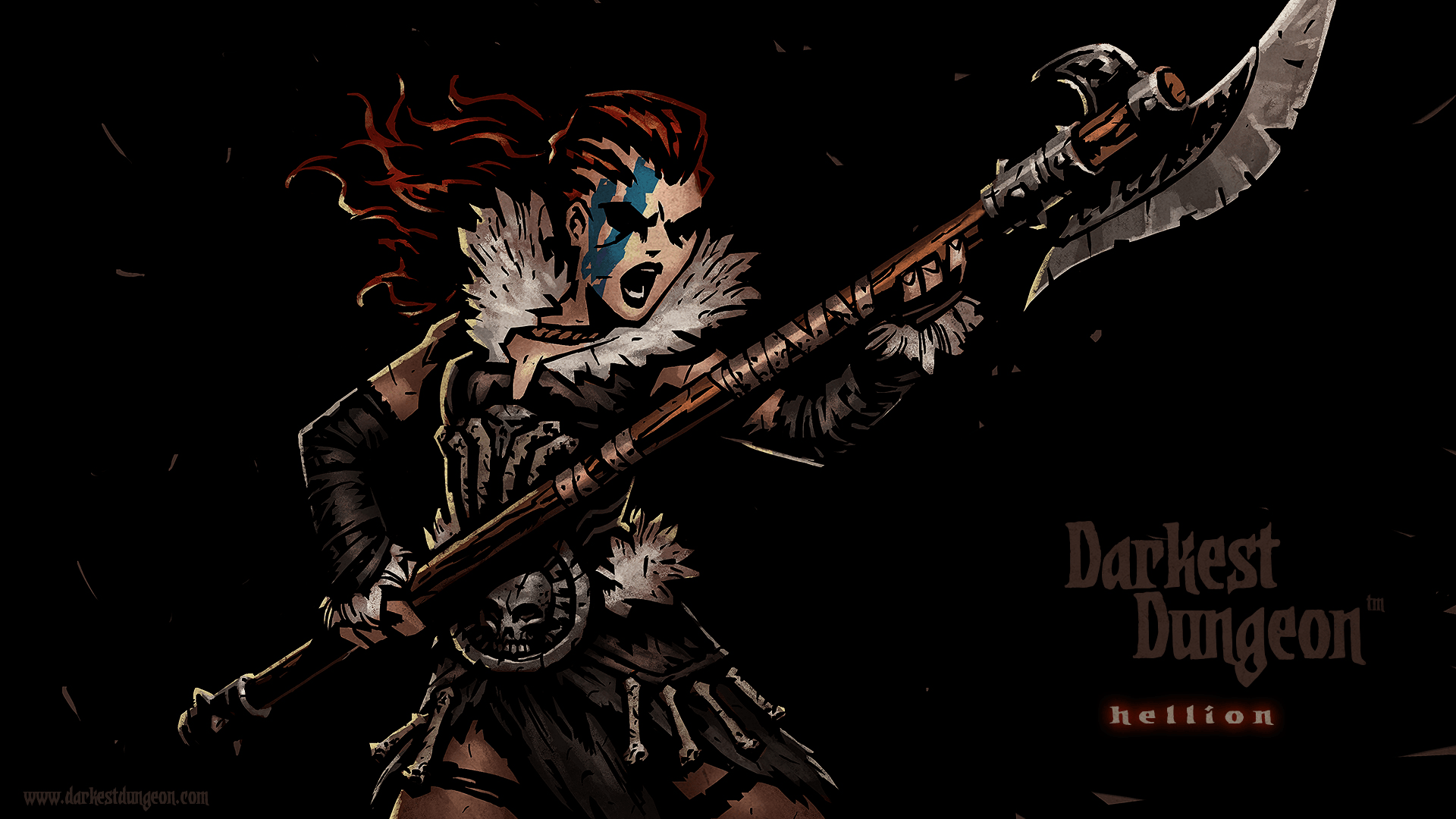 Maybe my personal favorite, Hellions are no-nonsense, face-beating berserkers with a great reach and some very clutch abilities. Hellions are very good at hitting hard to reach targets, and she can fit in almost any party composition as the dedicated butt kicker, even if most of her abilities put some sort of debuff on her.

Breakthrough hits the first three enemy positions at once, but the lowered damage and dodge may convince you to use it sparingly. Yawp stuns the first two enemies for a turn. Wicked Hack is a solid basic attack, and Iron Swan is like Wicked Hack, but only hits the back row. 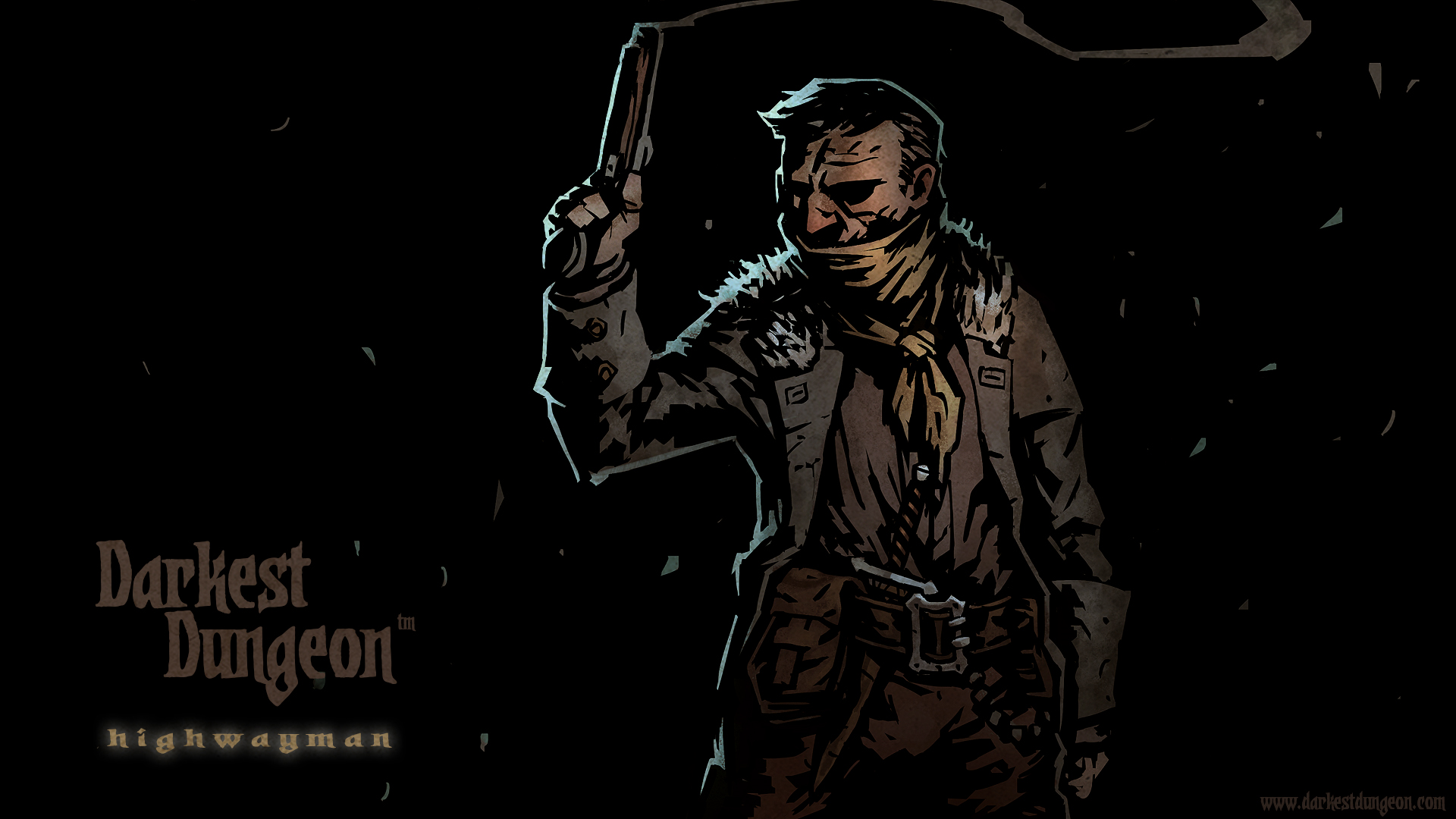 Your prototypical rogue, the Highwayman is a high risk/high reward hero who can do a great deal so long as he can remain alive. He moves better than pretty much every other hero, and can find himself still being lethal in any position he ends up in. He's come out of Early Access with buffs/nerfs smelling like roses.

Grapeshot Blast is widely considered one of the best attacks in the game, as it hits the same targets as the Hellion's Breakthrough, but at a higher CRIT and without the debuffs. Point Blank Shot is a front line only ability that packs a punch and will push both user and enemy back a row. Pistol Shot is your run-of-the-mill shot if you're not in position for Grapeshot. Tracking Shot is a lower damage shot that gives the Highwayman some great buffs. 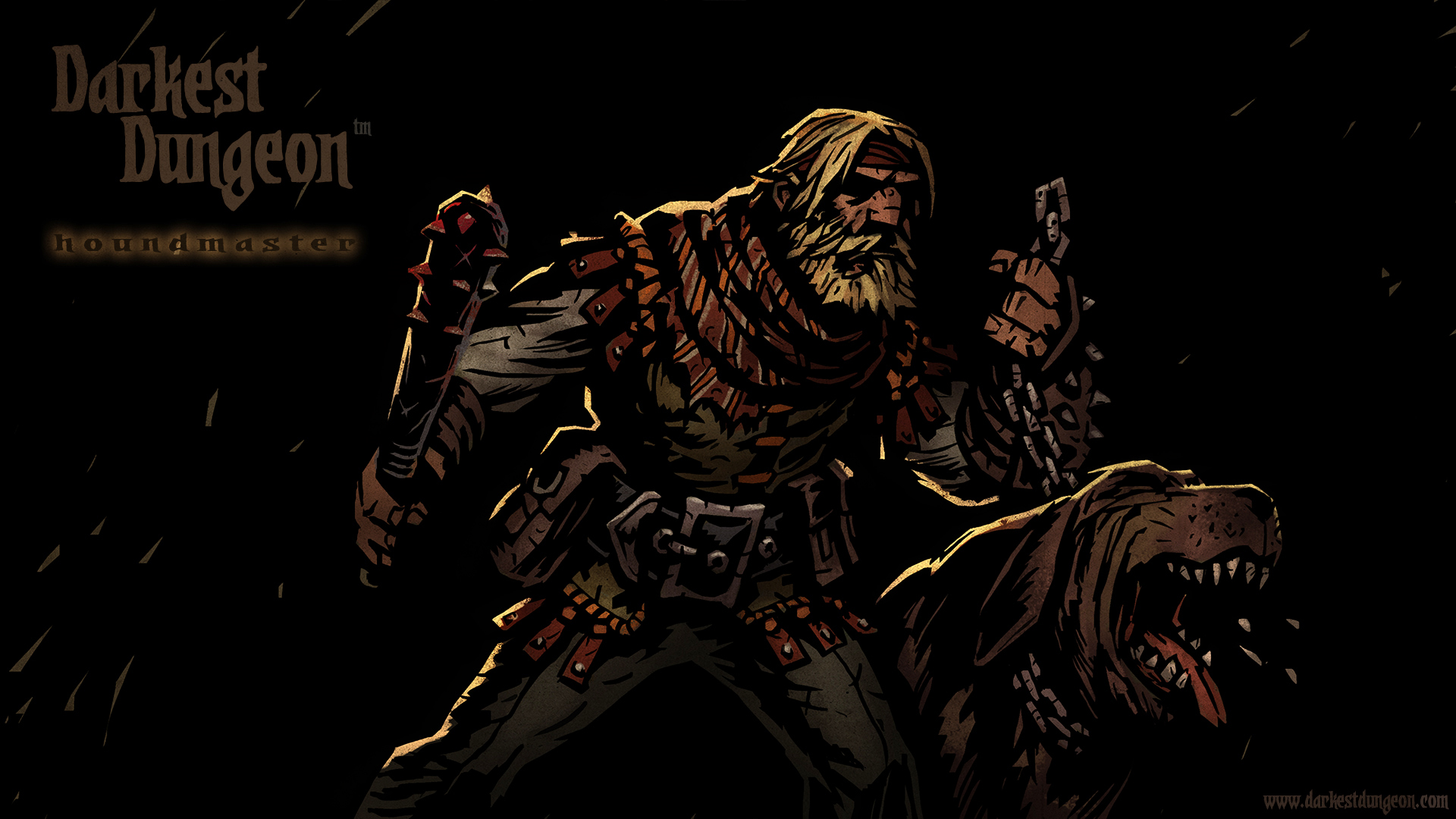 An interesting choice of character, the Hound Master is somewhat of an oddball. He is a good choice if you know you need to bypass high PROT enemies, and he can mark foes and heal himself reliably. He's also got decent stress resistance and stress reducing camping abilities. He also has a dog, and who can't trust a guy like that?

Whistle marks targets, while Hound's Rush does bonus damage to the marked foe. Hound's Harry hits all enemies for a low damage attack that can cause bleed. Lick Wounds heals a flat 5 HP to himself. 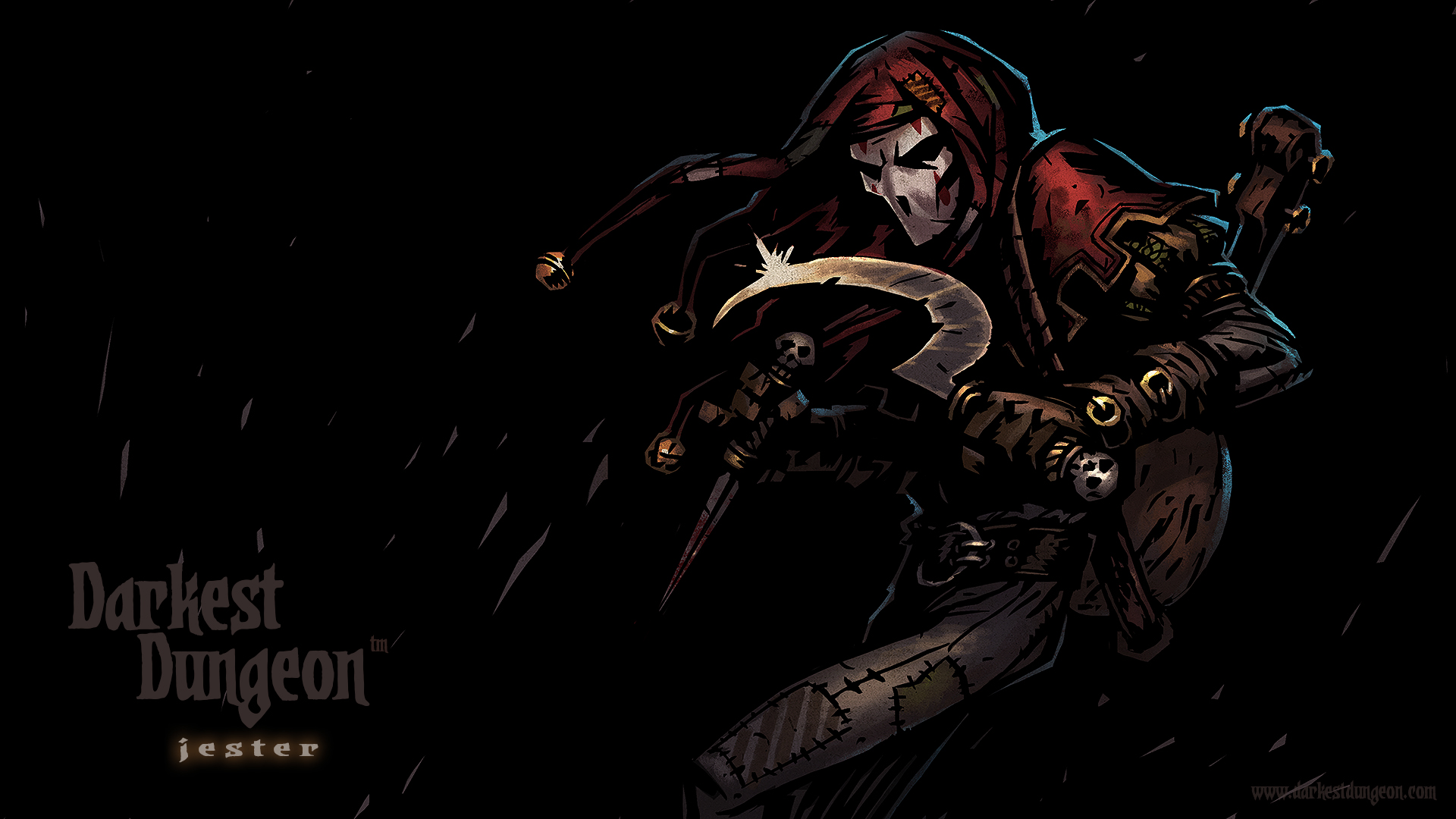 In combat, no one is more ready to confuse friend and foe alike than the Jester. From the back line, the Jester can play songs to buff his allies and relieve stress. He can also leap into the fray, debuffing the enemy team and causing bleeds, but almost always at the cost of his safety. His camp skills are among the most useful in the game, focusing on stress heals for the whole party, which become very hard to come by.

Harvest is a lower DMG attack that hits both center positions and can bleed. Slice Off also bleeds, but only hits one of the center positions with higher damage. Battle Ballad speeds the whole party up and makes them more accurate. Heroic End is good skill to get away from the front line, but if you have a party composition where other heroes can move to the front rapidly, Solo may be an overall better option. 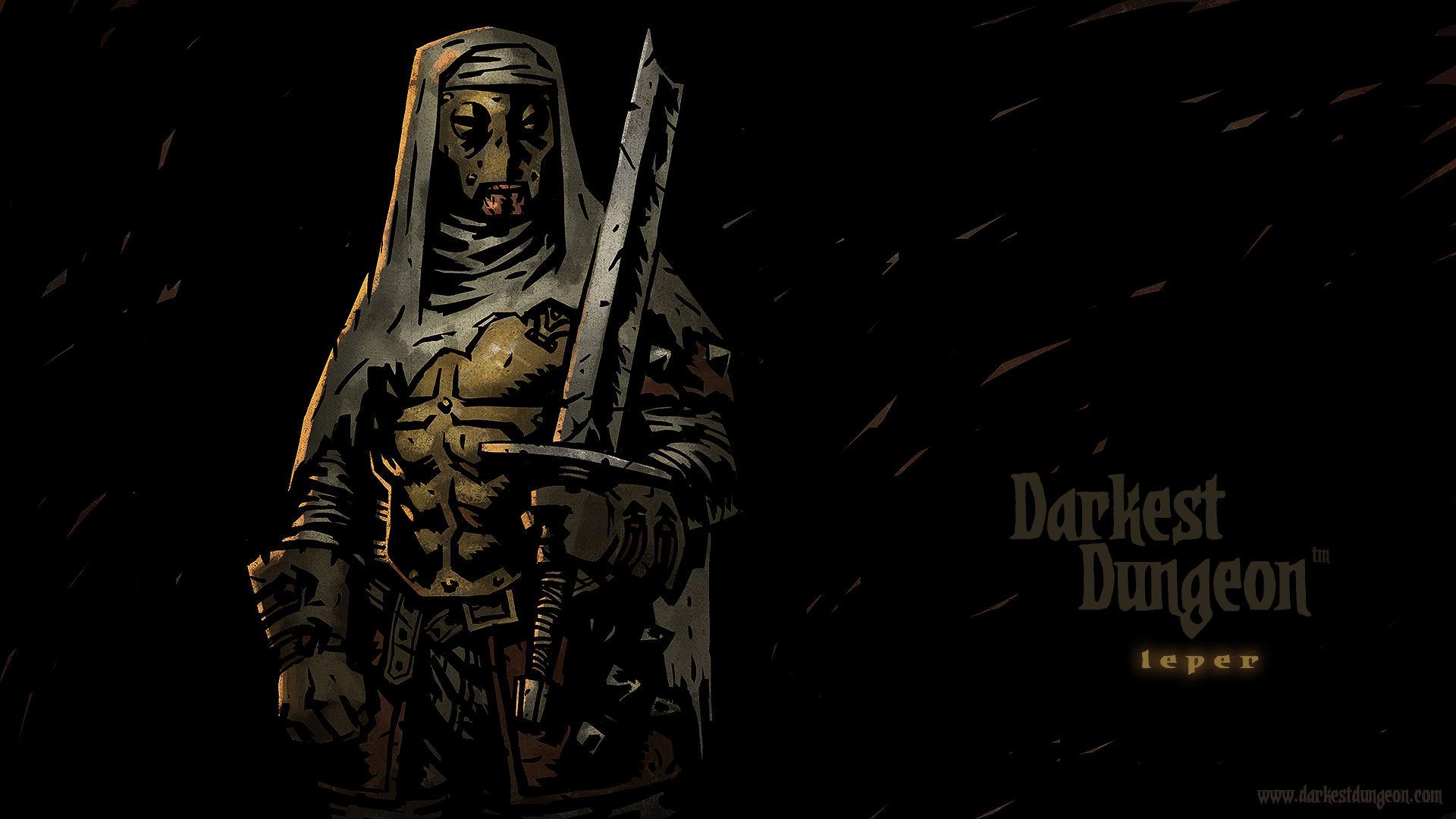 The Leper is a self-sufficient powerhouse who can do pretty good damage to up to two targets at a time. When allowed time to prepare, the Leper can be a real issue for most enemies. But he is slow, has pitiful ACC, and has no position changing moves to speak of. He does have quite a bit of health, but if he isn't in the first two positions, he's effectively useless.

Chop is a single target melee attack, while Hew is the two target version for less damage. Revenge self buffs DMG and CRIT at the expense of DODGE and PROT. Solemnity is a solid, reliable self heal. 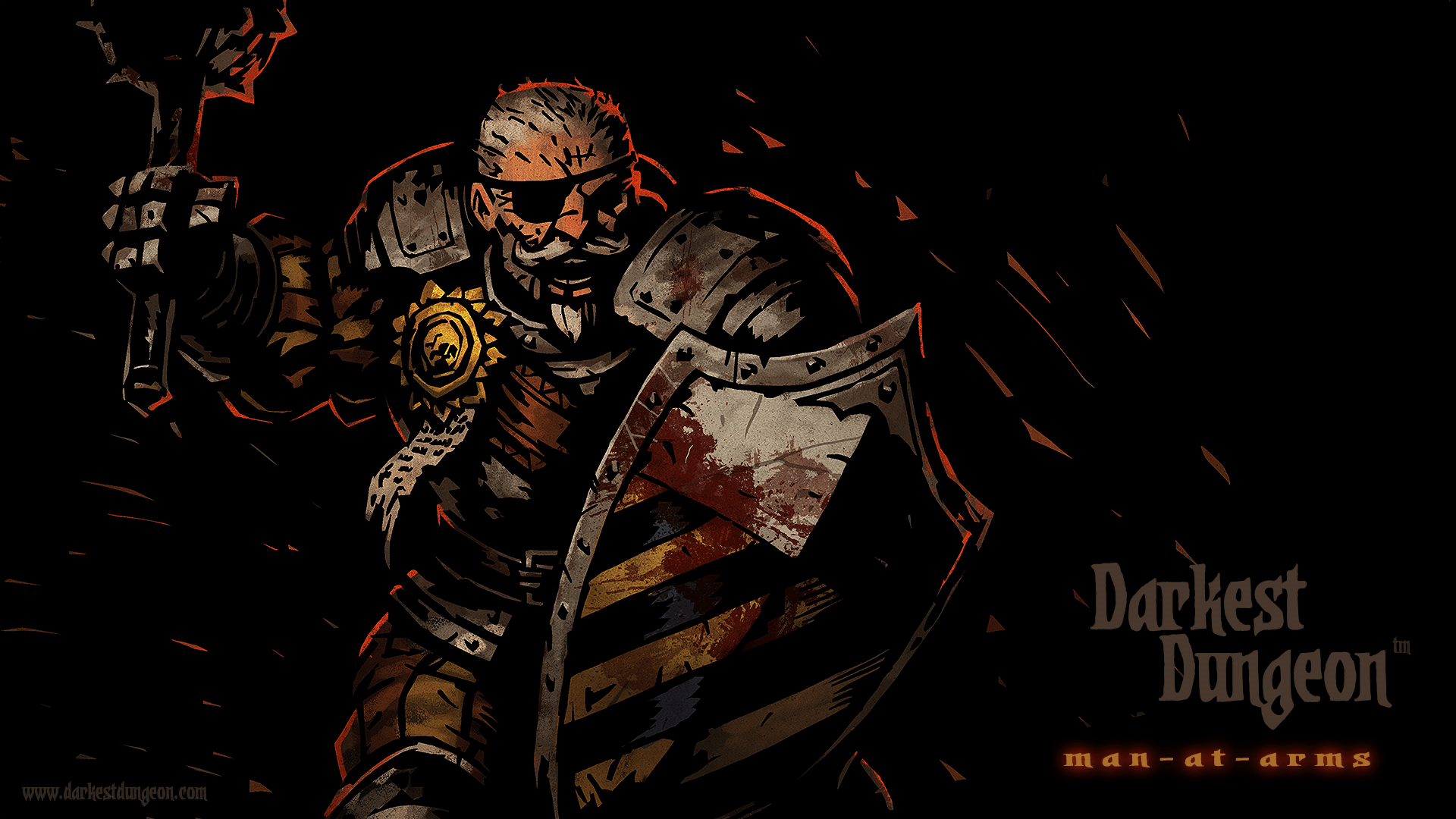 It's hard to go wrong with the Man-at-Arms. He is a front line tank, team supporter, and damage dealer all in one. He can protect specific allies, has a great suite of stun abilities, and can counter attack aggressors with extreme prejudice. There is nary a situation that the Man-at-Arms isn't well suited for.

Crush is a single target melee attack with good damage. Bellow is a debuff with low damage that hits the entire enemy party. Bolster buffs the entire party's DODGE. Retribution marks the Man-at-Arms, but activates Riposte. Riposte allows him to attack every enemy that attacks him with a low chance to stun.

A walking bag of tricks, the Occultist is the ultimate toolbox hero. His kit is full of strange and situational abilities that will vary in usefulness depending on your location, party composition, and the monsters you're facing. Occultists spend an awful amount of time waiting to be super useful, and the one moment when they're pushing and pulling and hexing and marking is where the love for these oddballs is bolstered. He could be considered a must have versus Eldritch enemies.

Wyrd Reconstruction has a great potential for healing, but can cause bleed to your target and is ironically what you'll be using most often. Abyssal Artillery hits the back two rows and does extra damage to Eldritch enemies. Hands from the Abyss is a stun that debuffs targets and actually makes the dungeon darker. Vulnerability Hex debuffs and marks targets, and could be super useful in parties with Arbalests, Bounty Hunters, or Hound Masters.

A master of damage-over-time, the Plague Doctor excels at bringing blight to creatures. As the lack of outright damage can be underwhelming, DOTs ignore PROT, and can sometimes be the only reliable damage to big, husky creatures or back liners. She can also buff the attack of a single ally significantly, making her a decent option to support your team's face eater. The challenge becomes overcoming the steady rise of blight resistance in creatures late in the game.

Noxious Blast is single target blighter for the first two rows. Plague Grenade can blight the back two rows at the same time. Blinding Gas stuns the back rows at the same time, which is great considering that's usually where the damage deals are. Battlefield Medicine is an underwhelming heal that can also cure bleed and blight. 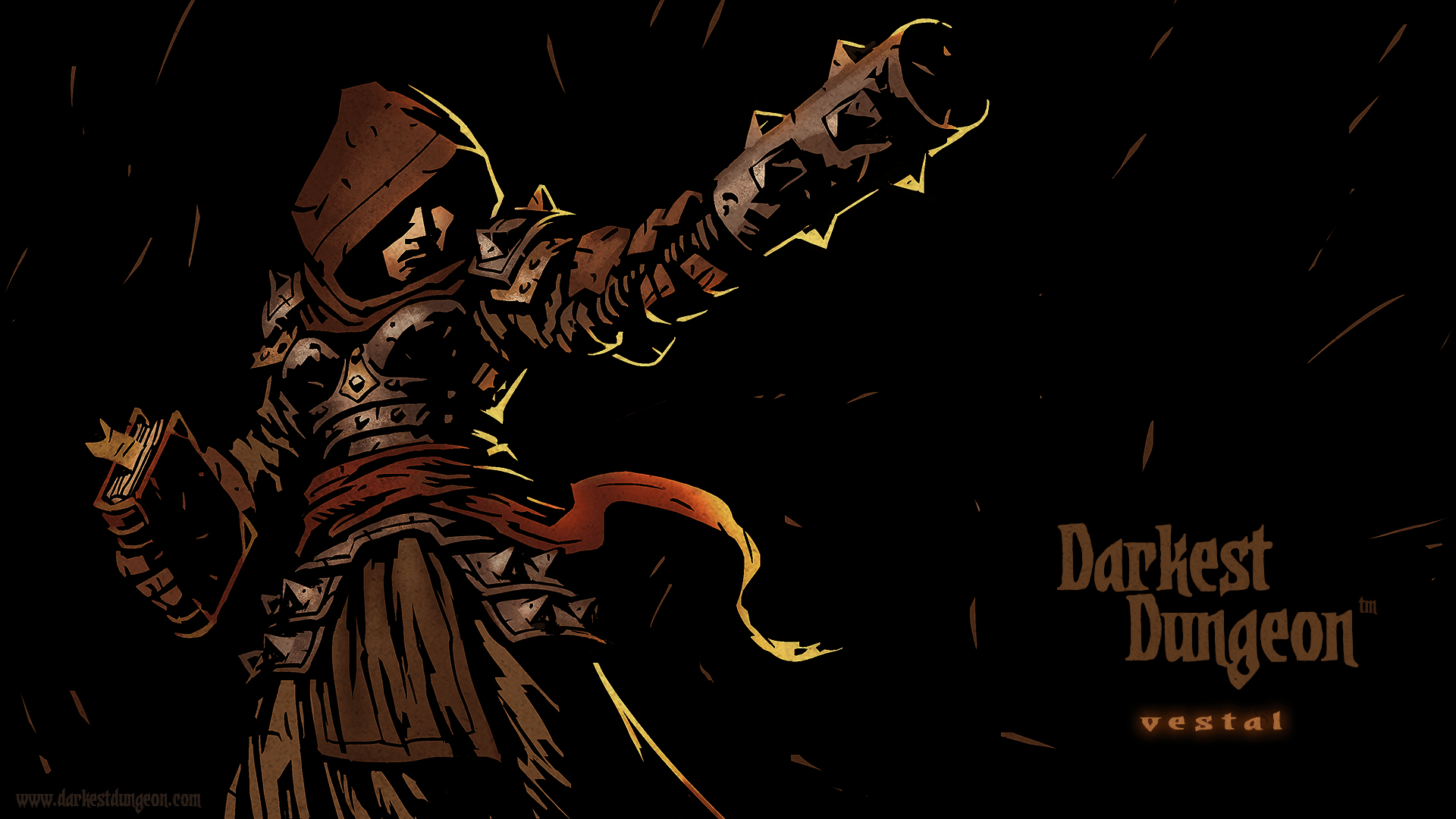 The Vestal is the quintessential healer, great at healing single targets and the whole party competently. She also mixes offense with damage mitigation in creative ways that don't have to undermine her main role. With the right (religious) party, her camp skills can make the team a formidable dungeon clearing machine. She's basic and relatively boring next to some of the more eccentric choices, but you are playing with fire if your party doesn't have at least one.

Judgement is a ranged attack with a self heal component. Dazzling Light is a ranged attack that stuns and adds light to the torch. Divine Grace is her bread and butter single target heal, good for standard damage healing. Divine Comfort is her party heal that is great for staunching multiple DOT effects.

If this helps, let us know on Facebook or Twitter. Make sure you're cultivating this knowledge in the editing contest at the Official Darkest Dungeon Wiki. You can win sweet loot, and you won't even have to drink poison mead to do so.