When Blizzard debuted its Warcraft spin-off, Hearthstone, a couple of years ago, no one was certain of its chances in the long run. A fun, easy to learn, free to play collectible card game was somewhat of a new market for the mega developer, but it didn't take long for the game to catch on like wildfire. Critically praised and supported rabidly by paying consumers, Hearthstone is a juggernaut of a card game and a force to be reckoned with. As Blizzard makes plans to introduce some very big changes to the game, can it stay that way?

These changes have the same goal in mind: preserving the long term health of the game. Firstly, that means increasing the amount of decks a player can make. Doubling the deck slots means any given player can have up to 18 different ways to climb ranked ladders and take on Solo Adventure challenges at any given moment. That's quite a lot of decks. The expansion is a bit necessary though, thanks to the other trick of Blizzard's sleeve - game formats.

Not uncommon for long running card games (the preeminent example being Wizards' Magic: The Gathering), Format rules set artificial barriers to sort cards out of being playable in the primary competitive form. Magic has tons of formats, which make sense considering its an over 20 year old game. Hearthstone will only have two, Standard and Wild.

Standard essentially makes every expansion from the most recent two years legal, on top of the Basic and Classic sets. When Standard gets implemented, it will make cards from the Curse of Naxxramus and Goblins vs Gnomes sets illegal in the format. Wild has no restrictions, making the full collection of cards playable. Standard won't effect Arena, Solo play, or Adventures, but everything else will have a Standard option. There will also be a different ladder for each format, so players can choose to play as they wish. Seems like a big change that people can understand, right? 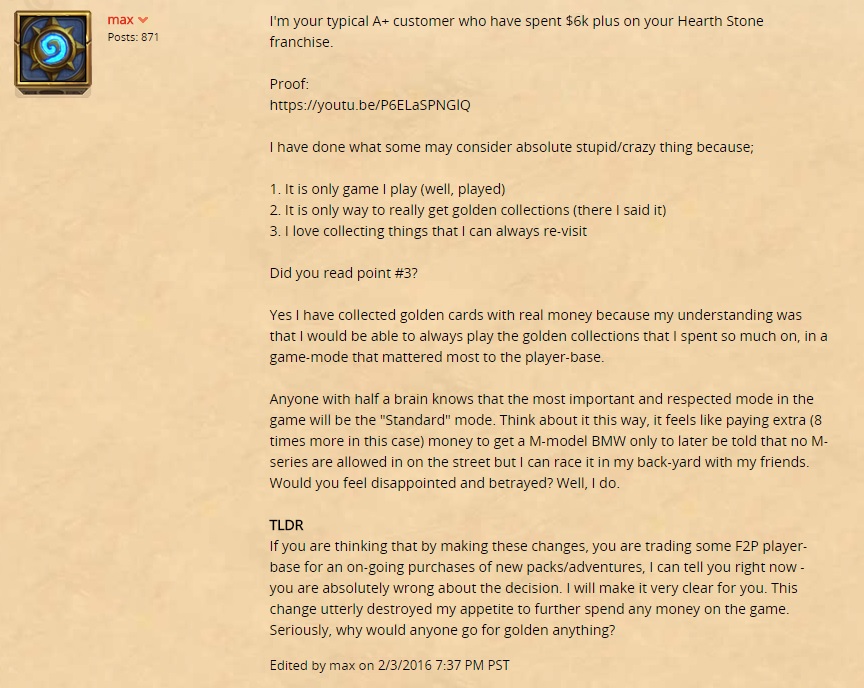 Max might have a point in his newly developed dejection. Up until this point, every dollar he's spent and every hour he's played was under in impression that his investment would remain more or less intact. $6,000 is quite a lot of money to spend on anything, let alone a collection of digital cards. Now, for Blizzard to slide in and fiddle without his permission and completely devalue his time and effort spent is both unfortunate and exactly what Blizzard has been doing this whole time.

There are a couple things to keep in mind here. Firstly, you can't resell any cards you buy. The aftermarket value of a card is whatever tier of dust value it falls into. Every dollar you spend in this game (or almost every free to play game, for that matter) is a sunk cost. You can still attach a figurative number to it, of course. That number can effectively change for the better if it becomes harder to get certain cards (more on that later) but that number will never translate back to dollars spent by a legal means.

Secondly, Gold cards have no higher value as far as their effectiveness in game than their more mundane counterparts. The premium you pay for them (in dust and, ostensibly, in real money) goes simply into making the inner collector in you feel better. This isn't a bad thing, really. It's totally normal for a person to marvel at the sight of complete set of something rare and shiny. It's also the investor's choice to spend money to do so. Something I have to assume Max knew about when he made said choice. He probably also knows that Blizzard has (sparingly) taken it upon themselves to change the way cards work after their in the wild, something unheard of in physical card games. If I owned a Warsong Commander last year, there was time when I went to sleep one night, and woke up the next morning with this card being pretty different, and my warrior deck being way less effective. Change is the widespread risk of this sort of digital ownership, unfortunately.

But to spend that much on a full collection of gold bordered cards suggests that Max isn't overly worried about how most of these cards play, just that they have that flaxen glow. Ill make no attempt to assume just how actively he was reaching into the dark corners of his collection to put together new decks on a regular basis. But if he's like the average player, he probably doesn't.

None of that really matters though, because these cards are still totally playable in the Wild format. I can see where people can jump to the conclusion that Wild will be less prestigious and less regarded than Standard - as alternate formats tend to be in other games. But "Wild" won't be some casual circus. It has its own Ranked ladder, with all the same ranks it's always had. I have a hard time believing that Blizzard will just up and remove it from professional play, as well. If anything, this gives players more opportunities to play for prizes at the competitive level, and gives players options on what sort of game meta they choose to focus on. Standard is the format for the Hearthstone Championship Tour, but that doesn't have to be the only prize supported game in town. Regional tournaments for alternative MTG formats happen all the time, the same could be for Wild. The basis of Max's argument is centered around this fear that his cards will be forgotten, and that his chances for fame and fortune are all but dashed. That just doesn't make a lot of sense.

Max isn't the only person with cards that span the three year life of Hearthstone. He won't be the only person looking to get more mileage out of his old school decks. Decks based around Naxx and GvG cards don't just have to get dumped. His road to Rank 1 didn't necessarily just get easier. His Reason #3 seems to be completely intact, when its all said and done. I could be wrong, and Wild could shrivel up into a withered, abandoned after thought, but just assuming it would and demanding refunds and recompense isn't a reasonable response to this.

There is one legitimate problem with these changes that I can actually agree with some of the disgruntled on. From Daxxarri's post on the Hearthstone website:

Adventures and Expansions that are not part of the Standard format will no longer be available for purchase from the Shop—this year, that includes Naxxramas and Goblins vs Gnomes. If you want any cards you missed out on for Wild play or just to fill out your collection, you’ll be able to craft them using Arcane Dust—even cards from Adventures that were previously un-craftable. Speaking of Adventures, if you’ve purchased at least the first wing of an Adventure before it cycled out, you’ll still be able to finish acquiring and playing the remaining wings.

Then intention is to focus on this newfound drive to focus on new players. A bloated cast of old cards that technically won't count in their primary format would be overly confusing. But to make the old sets and adventures completely un-purchasable with cash seems overly cautious. It can also be taken as somewhat anti consumer. Where as Adventures guaranteed that you could get a group of cards so long as you beat the challenges in them, now it's up to your ability to manage dust. Some of those cards have now just gotten way harder to get, considering dust is a resource primarily derived by destroying cards in your library. $25 bucks now only gets you a handful of packs, whose total dust value will vary and could very well not be enough to craft a play set of uncommons that are popular in Wild decks. You most likely will be paying more for old cards because of this, which makes you wonder who Wild is supposed to be for. Old players who still want to use their old decks, or players who will pay the "stubborn tax" to resist change.

On the bright side, if your collection includes these newly harder to acquire cards then congratulations, it's technically worth more. Not that you can sell or trade cards, but... it's something?

All in all, games change, and this one was a long time coming. As some of the push back makes sense, some of it is a lot of hot air and needless outrage. Am I wrong? Let us know on our Facebook page and on Twitter. And check out our Hearthstone Wiki to stay up to date with this wide sweeping changes.