Look to The Skies for the next great F2P MMORPG experience — with its huge game world, compelling character progression system and an innovative player-driven economy, it's certainly shaping up to be something out of the ordinary. Today, the game officially launches on Steam Early Access. To celebrate the game's launch, we're giving away 3,000 promo codes for the game that will unlock one of three items to help you get started in the wasteland.

The Skies is all about making players feel like the choices that they're making have a real impact on the world around them. You'll see decisions that you make during quests have consequences both good and bad, but your actions will also have more subtle effects on its post-apocalyptic setting.

Take its economy; if you're just looking for enough cash to get by, you can take a job at a factory to take care of your finances. Alternatively, you can make money your sole focus in the game, and start a business that hires other players to do the hard work in exchange for a living wage. 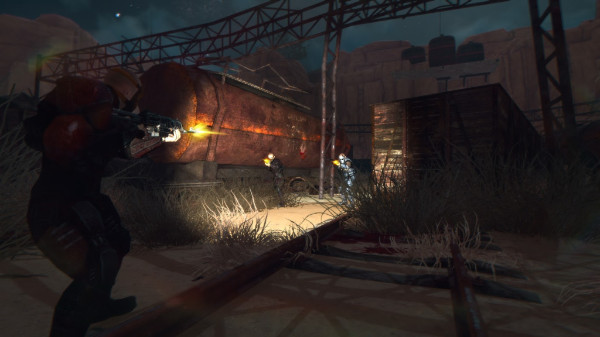 But that economy is just one element of a truly huge experience. There's also high-stakes PvP combat to engage in, a complex crafting system and a character progression mechanic that uses your style of play to create an avatar that's unique and tailored to success in particular situations.

The Skies is a big game that's set to get bigger as development continues; there's 12 square kilometers to explore right now, which is set to expand to 200 square kilometers post-launch. This land mass is packed with colorful characters, deadly weapons, and unusual flora and fauna — information on all of which can be found on the Official The Skies Wiki.

Here's some footage of The Skies in action:

To celebrate the game's F2P Early Access launch, Gamepedia is giving away 3,000 promo codes for the game on a first-come, first-serve basis. These codes will unlock one of the following items: the Cricket Weapon, the Captain Weapon, or Leather Armor. You can visit our giveaway page here.

Once you're in the game, be sure to head over to the Official The Skies Wiki for a wealth of tips and tricks sure to give you the upper hand online.

Miitomo is Another Social Connection Between Gamers and Friends