Master x Master is NCSoft's - the Korean game company responsible for MMO's like Aion and Blade & Soul - dive into the MOBA genre. The company throwing its hat into the arena that Riot, Valve, and Blizzard dominate is a risky proposition, but MxM may have just enough going on that it differentiates itself from the competition. That doesn't mean there aren't features MOBA players are familiar with, but NCSoft has definitely created a game that stands out. Here's five things you should know, post pre-Alpha.

The controls are "active" - very different from the point-and-click nature of many MOBAs. Using WASD, you have full control of not only your destination, but how you get there. Vigorously dodging enemy attacks involves split second reaction time and reflexes. Running and jumping adds a platforming dimension to certain levels, making any given skirmish feel like a frantic clash of physical prowess a la fighting games, as opposed to the test of wits and wills that a duel in League of Legends sort of represents.

That said, not every character is quick and nimble on their feet. Some, like Innowin, have no qualms with standing in one place letting the missiles fly. Others, like Cagnazzo, find their strength in being stoically in the enemies grill. But when you play more nimble assassins or marksmen, like Dr. Raoul or Sizuka, you really start to see the difference that WASD can make on your experience. For those who miss click-to-move, the option is still available. Just not by default. 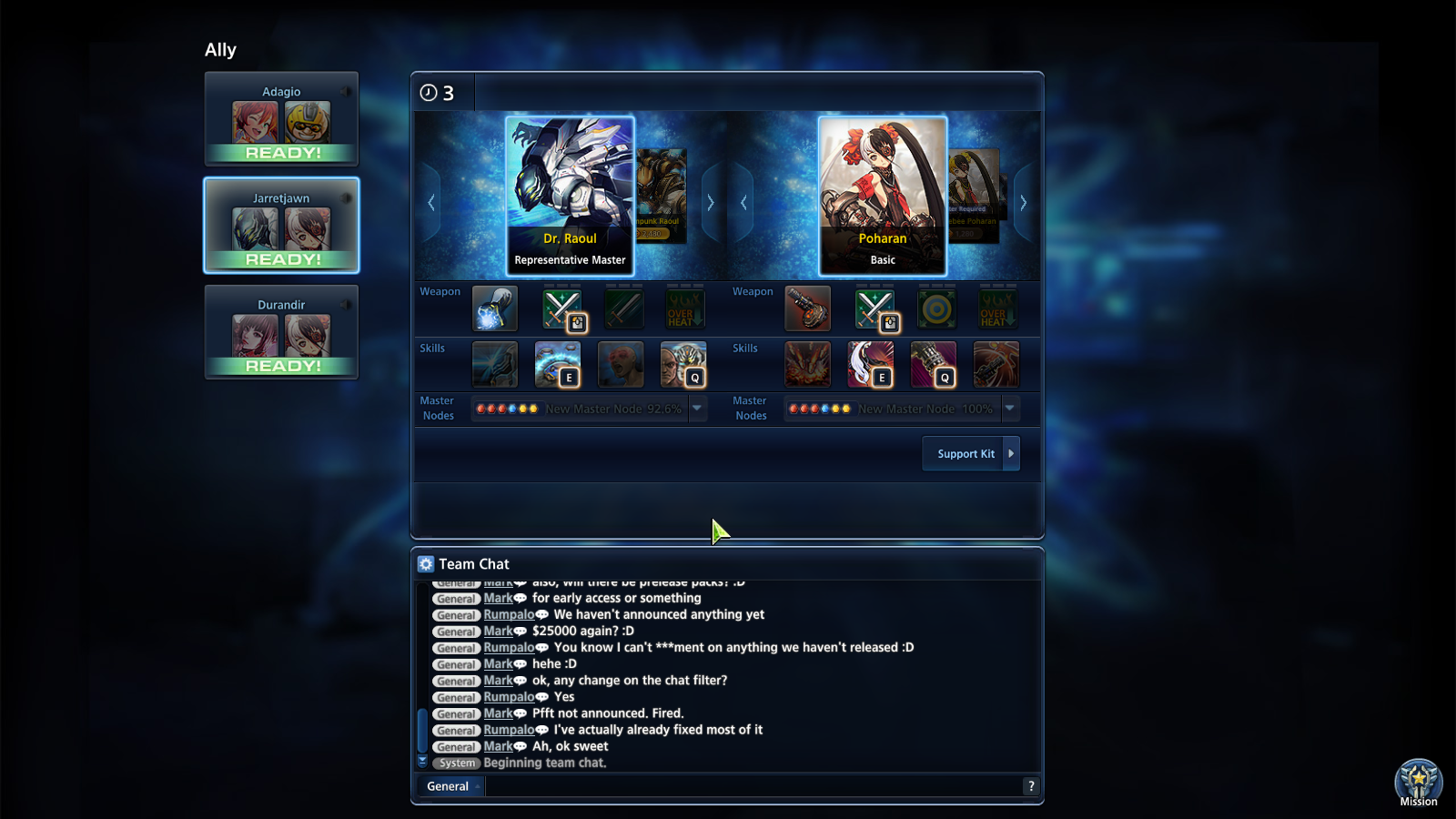 At the beginning of every game, be it in the PVP arena or the single player/co-op stages, players select a pair of Masters among the ones available. You play as both of these <asters at the same time.

Well, they aren't on the field at the same time, but a little slide of the mouse wheel "tags" your partner into battle, replacing who you were previously. This has A LOT of advantages and tricks associated with it, and it's easily my favorite feature in the game. Masters on the bench heal back lost health slowly. The tag system allows you to fill in the weaknesses of your own playstyle and have more that three types of Masters per group. You can create a party for almost every situation between you and your other group members. Maybe most interestingly, you can set up your own abilities. Lock someone down with support mage R&B just long enough to switch and nail the target with Taejin's rocket barrage. These inter-partner combos channel Tekken Tag in the best ways, but just like that iconic fighting game, if one of your characters dies, they both are down. 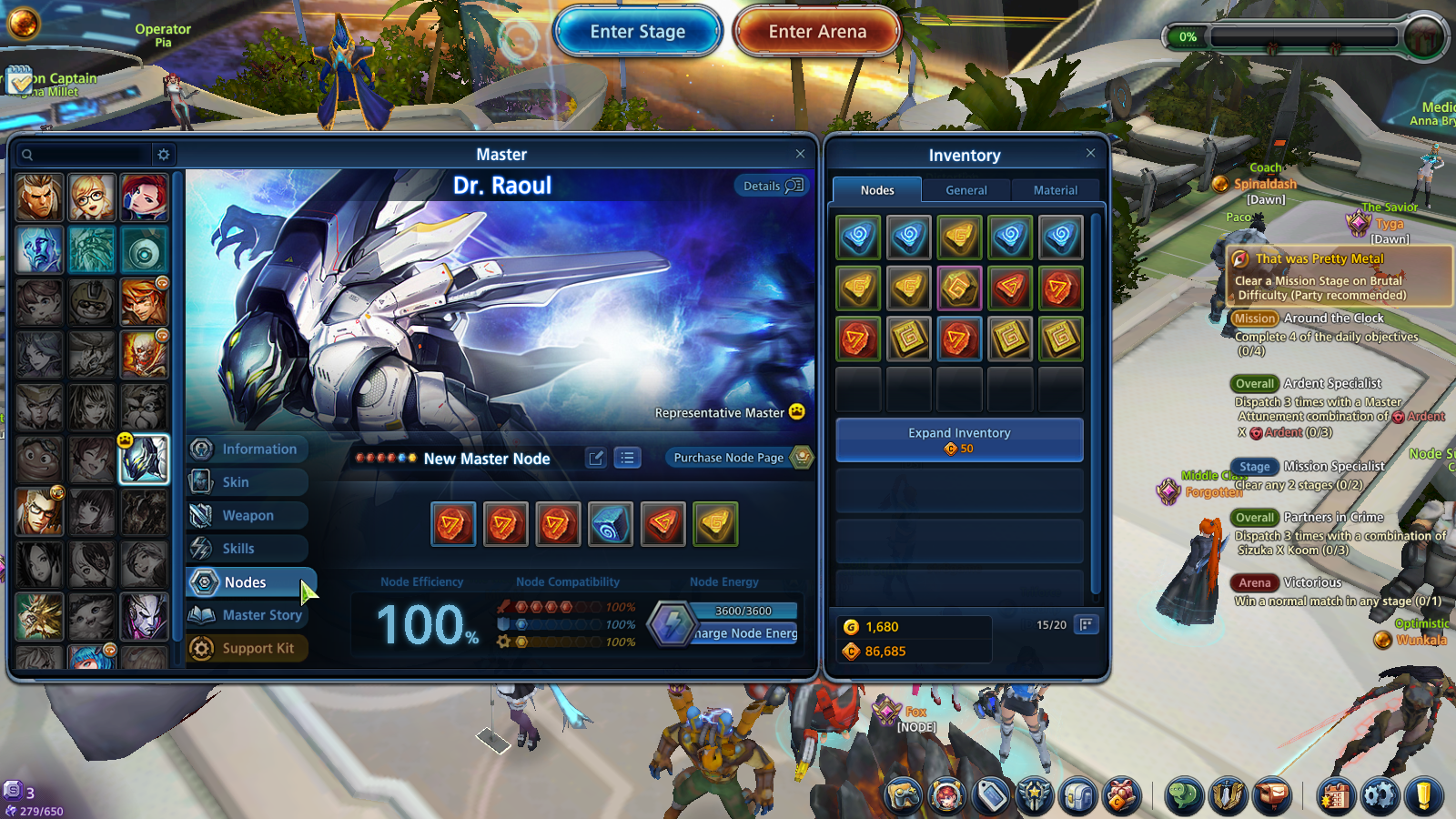 Instead of buying items and studying builds, MxM lets you throttle the power of a Master in a more strategic way in the form of nodes. Strategic, in that you have to equip them before any given battle starts, so your node selection greatly reflects what your Master can do to opposing Masters.

Each Master can access a six slot Node page. In it, you plug in different nodes that give you different abilities. Though the nodes can cover a vast amount of different stats like crit rate and defense, they generally are spread across three different types - offense, defense, and auxiliary (red, blue, and yellow). Nodes themselves come in different shapes, sizes, and strengths, and every Master has their own spread of nodes to be used as a guide when assigning them. For example, to equip Death Knight with nodes at 100% efficiency, you should be using two offense, three defense, and one aux node in his six node kit. The numbers change per character, and, though multiple characters can use the same pages, you can still assign a new page to individual Masters.

Depending on what sort of game you're playing (PvP or PvE), your abilities will either level up during the course of a match or will require leveling prior to jumping into a stage. During PvP, you rank skills up periodically like any MMO, but all of your skills are available immediately and can be leveled up in any order. In PvE stages, you must have spent in-game gold to upgrade your abilities prior to entering. These upgrades are permanent, so they will always apply to your particular Master no matter what stage you run them through. 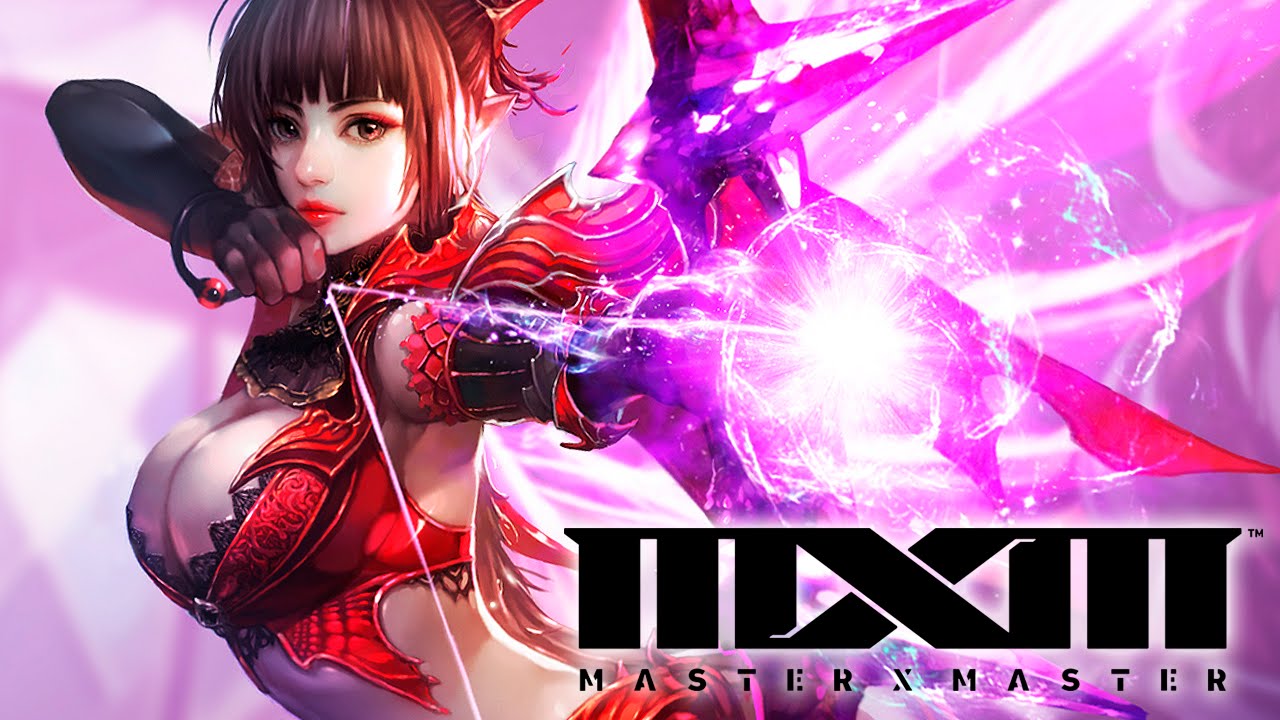 There are 30 playable Masters so far, each one colorful and unique. The most noticeable ones are the ones that aren't MxM originals, though.

Characters from across NCSoft's many properties are playable in this game. Blade and Soul villain Jinsoyun, Guild Wars 2 NPC Rytlok, and Wildstar's wily tinkerer Mondo Max are among several characters cross-pollinating into MxM. Aion's Kromede even had her own special dungeon during the alpha event. This bodes well for NCSoft followers who don't mind a little fan service.

The 3v3 map is quite small. So much so, you can traverse the whole thing in under a minute. But that's the point - the skirmishes that go on in this map are hard to avoid, and the close proximity you and the enemy share is its own form of persuasion when it comes giving you reasons to fight one another. In this mode, only scores matter. A kill granting a point. The team with the most points wins. Simple enough?

But, to complicate matters, the arena is riddled with obstacles that move and change as the battle rages. Boxes full of power-ups periodically spawn on the map, giving the lucky finder a temporary boost. Once you enter the fray, you can't return to the safety of your spawn point (where you also level up your skills as the chance becomes available) until you die. I had a great time in this mode, especially because of its focus on short, intense firefights. It reminds me of Twisted Treeline in League of Legends, where the claustrophobia-rich map ensures that you're never too far away from a fight.

The 5v5 map was a more elaborate, objective-riddled affair. Both teams of five are looking to get into the others' base and destroy its Titan Relic, which should sound pretty familiar to MOBA players. Three lanes with periodically spawning minions lead to these monuments, but gaining access to the enemy base involves a lot more than simply walking up to it.

There are many objectives to be found and controlled in the beautiful and expansive play space, like jungle monsters that provide buffs and towers that provide vision of particular parts of the map. Traversing though the map's diverse environment is quite the experience. It combines some of the meandering mazes of some SMITE maps and the unique, objective-seeking of Heroes of the Storm to make a wholly unique set of conditions. Did I mention you can also turn your character into a mighty Titan and bash your way down the battlefield? That makes it worth a look, all by itself.

NCSoft's Master x Master is onto something big, if its pre-Alpha test was any indication, and I can't wait to explore more. If you want to know more about it, or have a wealth of knowledge you'd like to share about MxM, drop by the Official MxM Wiki.