Supports don't get enough love in League of Legends. Being the second fiddle in the duo lane means your efforts are often unsung. When Ashe picks up that double kill, it's because the threat of your Leona's Zenith Blade caused the enemy to get into a bad position. What's your prize? Some assists, I guess. But a big part of your job also involves providing sight and counter warding so that your lane and the objectives down there are always accounted for. Much of that means Supports spend a lot of time doing important things, but not things that reward them in the tangible ways a champ in a solo lane recognizes. Supports are not, in and of themselves, under-powered. The position itself, especially with the Taric rework, is thriving. But it's hard to get the same satisfaction playing a Support as you would any other position, because as you can get over having your influence ignored by your teammates, it's a different story entirely when you feel like it's being ignored by the game itself.

Riot has taken big efforts to improve the quality of a Support's life and game play experience in the bottom lane. These changes manifests itself in a few key ways. Firstly, support items Ancient Coin, Relic Shield, and Spellthief's Edge have been tweaked. Choosing Coin implies that you're looking for the explosive engage

potential that Talisman of Ascension is supposed to provide. Ironically, the "initiate item" lacked the defensive qualities to survive long enough on first contact, so you really don't do much more than sacrifice yourself for the team fight. Adding Raptor Cloak to the build and removing Forbidden Idol should make the item feel more appropriate for the job. CDR was added to the the Coin, and Health/Mana regen was lowered and raised in the Medallion in hopes to make laning more pain free.

Relic Shield is the tankier choice for those Supports whose job is to simply get in the way, and statistically, it does the job admirably. Its key feature, the minion execution->gold sharing mechanic, seemed to fall off as time went on though. The execution function was based on the static 200 HP threshold, so even when the minions got beefier, you still could only finish them off at that low health. That's changed, and it will now scale both with minion level and item stage. That means the flat execute threshold is higher on Face of the Mountain than Targon's Brace. The execution no longer applies to pets, either - a tweak it shares with Spelltheif's Edge and its associated items, whose Tribute used to proc on things like Malhazar's space puppies. With more enemies in lane to activate the passive on, there's an unintended boost in gold gain when fighting pet owning champs.

Other, more game-wide changes were made with Supports in mind as well. Warding is a big part of League, especially on a high level, but the immediately recognizable benefits of warding are often nonexistent in your average normal or low-end queue. You don't always call out good ward presence in a win, but you always call out sightlessness in a loss. C'est la vie.

Stepping out of lane to ward has an inside baseball-y sort of meta effect on your ability to gain experience and gold during laning. You're not near any minions being killed, not killing any yourself, and not actively involved in any champion deaths, so you miss out on the assist should a skirmish happen in your absence. At least then you can say it was because you were establishing vision. When hunting for enemy wards (an oft under-looked aspect of the role) you could very easily come up empty handed and your opting out of experience/gold seems rather futile.

This sort of dissonance is directly addressed in 6.13. Wards now provide experience when destroyed - 15 for blues and 30 for others. It's not a huge amount, especially since Caster Minions give around the same experience early in the game, but it's something. They also don't end out of combat effects when engaged, so Boots of Mobility would still grant a movement bonus while beating a ward up. I'm not sure that this really closes the risk/reward gap of warding as they've defined it, but it's still something. Maintaining out-of-combat effects seems a bigger deal for Junglers than it does for Supports, but a high tide raises all boats. 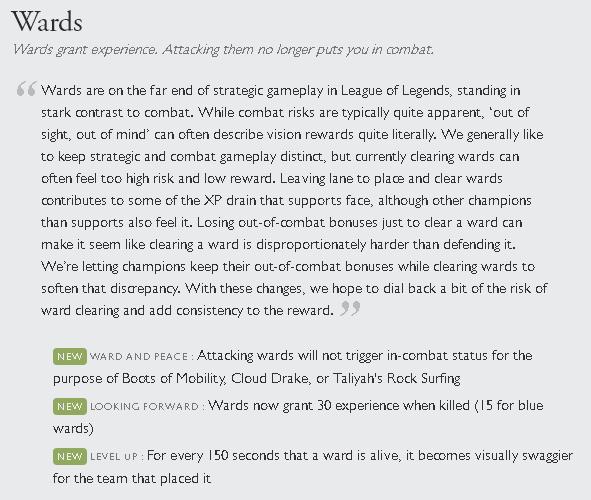 Many Supports are also initiators. Folks like Leona, Nautilus, and Alistar live to throw themselves into the thick of an enemy team, grab the squishiest thing there, and hold on until the cavalry comes. A brave and valiant description that's missing the key detail for a lot of people: sudden, painful death. When you're the first one in, you're also the first target. You might get to silence or root or stun or just really hurt that backline mage, but you are now the proud owner of every ability on the enemy team. Still - your death might bring the eventual victory of the team, who can then move on to make more permanent marks on the game because of it. #WORTH.

Then, after your heroic sacrifice that wiped out the entire enemy squad, you realize you only engaged one of their champs and got one assist. This major victory was enabled by you, but you get none of the spoils. You are under-leveled and even more likely to fall the next time you rush in to make an opportunity, which won't reward you proportionally either. It's quite the disheartening spiral, and it's one that many Support players get caught in every game. Riot's looking to change that.

6.13 introduces the Post-Death Kill Experience window. This establishes a window of time in which kills that occur after a champion's death in close proximity to them still reward them with XP. It's not completely clear whether this grants the killed champion assists or just XP, though. What's the difference? Well, the amount of XP, the effect on you kill participation stats, etc. Either way, whatever makes a player feel less like they're being punished for doing their job is welcome to me, always.

Riot is also reaching out into other parts to the greater Experience Point Pacing Condition. The relationship between experience and early kills is changing dramatically. As of this patch, early level kills result in a two-fold blow to the team and players that are on the losing end. Firstly, they died, which means early minion waves (who's next total experience is more than a player kill) goes missed for a significant length of time. Being down that farming opportunity puts you back in a less direct, but still very real way. Secondly, the opponent killed you, meaning at the very early parts of the game, they're a half a level up on you, and can farm freely. This sort of double dipping creates a dis-proportionally large advantage over something as small as dying once. Having champ kills grant less xp up until level 9 may nip this in the bud. Other advantage: people won't "have" to be so toxic when someone dies earlier, because it's less of a big deal than it was before.

There exists a network of systems during every game that work to provide under-leveled players with an opportunity to catch up to even at a quicker pace. When killing champions at a higher level than you, you get more experience than normal. When sharing experience with other champions, everyone involved receives more experience than they normally would. These examples and more come together to form what Riot calls "Catch-Up Experience," and it's all getting tweaked a bit. This feels like the catch all fix for all of the things that previously mentioned changes can't fix alone. It's weird that it wasn't like this before, but I also don't design games for a living, so what do I know?

In the shadow of all of these bigger picture changes, a few choice Supports have gotten some changes as well. The Terror of Bot Lane, Blitzcrank, has had Power Fist duration lowered to half the time, meaning he has less time to land his empowered auto attack. That said, it can no longer be cancelled by weird resets and interactions. Rocket Grab places victims in front of him and not on top of him, which is more of a feel good thing than anything else. Static Field no longer hits monsters when out of combat passively, and its cooldown now scales per level. It's higher initially, but lower by level 16. Nothing drastic, just a rusty tin man getting some oil.

Lulu floated away from bottom lane last season because her pushing capabilities were strong and with the greed allowed in the solo lane, she could become a force to be reckoned with. Once she was nerfed, brave souls still pick her in mid, but they don't come to bottom with the same sort of frequency. A buff to her base mana and movement speed, as well as bonus attack speed built into her Whimsy spell, may make her a more viable choice down low.

Bottom lane posterboy Thresh is not at a want for popularity. That said, his soul reaping mini game never seemed to accurately represent the struggle required to rake the spirit from epic monsters. That changes now, as two souls spawn from them instead of one. Souls are a big factor in a further homogenizing of his overall kit (and this Shang Tsung motif he's cultivating). At the cost of the ability power scaling (RIP AP Thresh, I guess?) Dark Passage will now gain +1 shield for every soul gained. His lantern will now travel maximum distance in a target direction when activated while attached to a target via Death Sentence. If you pull yourself to the target while the lantern is out, the lantern will actually stay available for that bonus range for a short period of time before breaking the connection. In other words, please click the damn lantern!

Zyra has sprouted up in the bottom lane as a wild overgrowth of zoning and crowd control, whose laning phase is among the most effective of current supports. I, like many including Riot, believe that her brand of organic produce is causing more harm than good. The spawn time of her passive seeds, Garden of Thorns, is going up. She's still Johnny Appleseed, spreading seeds all willy-nilly across the countryside, but she's not all Tumblr vegan about it. Rampant Growth's ammo recharge is going up, too. Because some GMOs ARE harmful.

All in all, it's not as grandiose a production as redesigning the Marksmen, Juggernauts, or Mages was, but this patch will be quite refreshing for Supports. 6.13 did other stuff, too! If you want to check those changes out, including the triumphant return of Ranked 5s and the re-balancing of Tahm Kench, check out the patch notes on Riot's blog post. As always, stop by Leaguepedia for your competitive League needs.

Taliyah Champion Analysis - Bring the Enemy Down to Earth