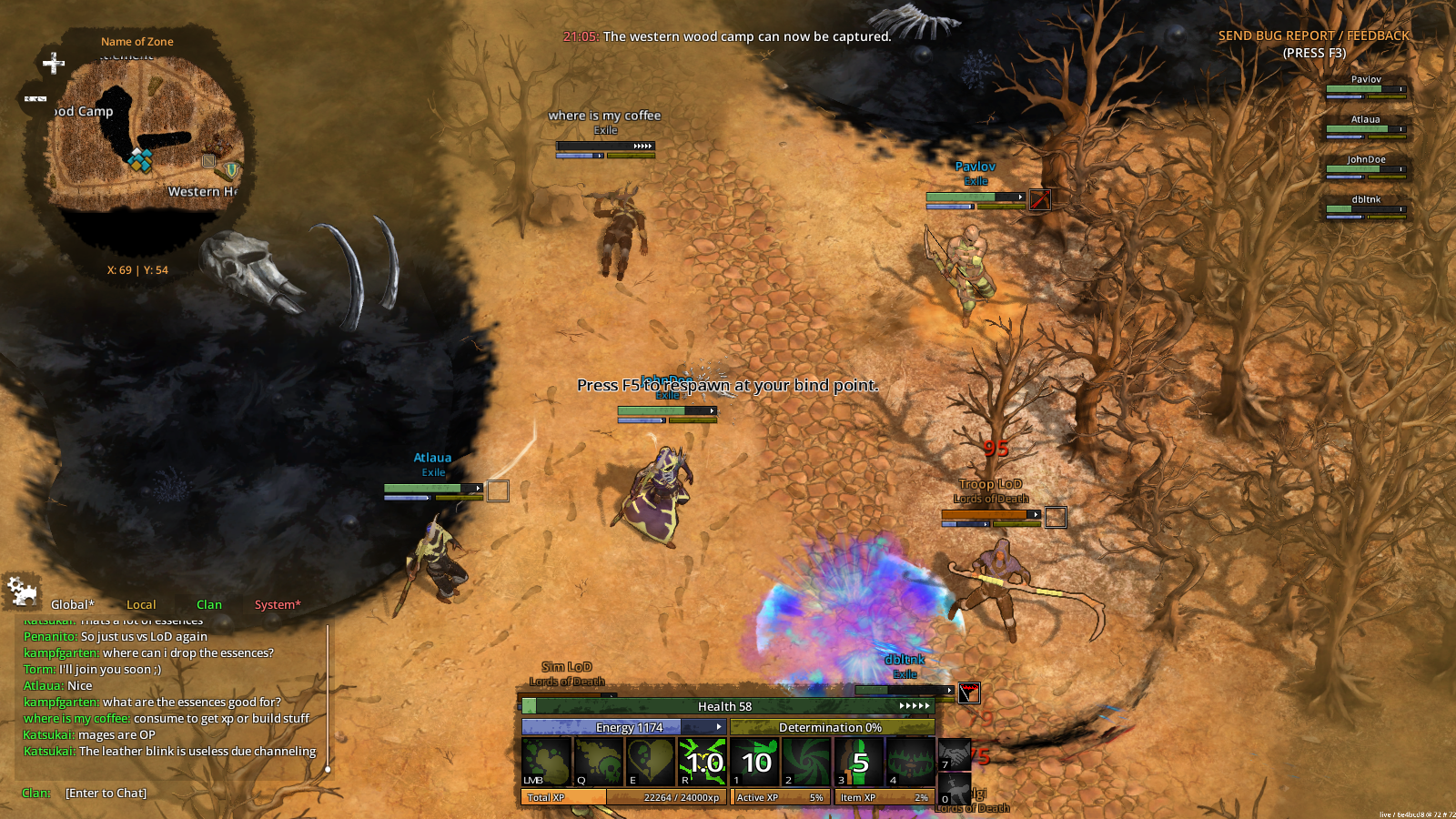 What if I told you there was a PvP game that had more depth than a MOBA, was more challenging than a standard MMO, and didn't require hours of grinding to reign supreme? Das Tal is a fast-paced sandbox MMORPG from Fairytale Distillery, an indie development studio in Germany. Just ahead of the game's Summer Alpha, we're talking with Game Director Alex Zacherl about what makes Das Tal a completely unique experience for PvP fans.

MOBAs are popping up all over the place - they’re fun, fast, and great for PvP fans. What aspects of a MOBA title does Das Tal borrow, and how does the game improve upon MOBA tactics in general?

I’m mostly intrigued by two MOBA features: One are their world maps which tend to have always-changing points of interest and different sizes of PvP events. A red buff will only attract a few players but Roshan/Nashor will basically always guarantee you team fights. We do things similarly in Das Tal where you might only fight one other player for a meteor, but once a wood camp can be attacked, you’ll face full groups from multiple clans.

The second things MOBAs (mostly LoL and Smite) did was to add “skill shots” to the otherwise rather boring system of tab-to-target-your-enemy that we have seen in top-down MMOs for so many years. Plus most MOBA abilities are really unique and come with lots of interesting applications, whereas MMO combat design before that had lots of abilities that were very similar to each other and could generally only be used in one way.

In many MMOs, grinding is an unpleasant but necessary part of PvP. How does Das Tal handle grinding?

Fortunately we decided early on that our game worlds will run for a fixed duration (currently two weeks). This means that we do not have to heap hours of grind onto our players since we do not have to prevent them from hitting the “end game” too fast. We are totally fine with you reaching the end game after a two weeks instead of four years. And then the week after and the week after and so on.

We’ve also added a certain elasticity to XP gains: If you start a new character at a relatively old game server you get huge XP boosts and will get close to the current level cap pretty fast - which allows you to keep up with established players quite well.

In Das Tal, skill is more important than gear. Why is this aspect of the game important to you, and how will it benefit both new and experienced players?

It is important to me because once I was done with school (which is over ten years ago now, wow!) I noticed that I just could not spend 8 hours a day on playing games anymore. But I still wanted to compete in PvP. So any game that makes me spend a lot of time to get gear in order to be competitive is prohibitive for me. Some readers might agree: It is a pretty crappy experience to lose a PvP fight against someone who can’t play his char but has 10x the health points and DPS since they can farm while you are at work.

Game worlds in Das Tal will only exists for one to three months before ending in a massive event. Won’t players be upset to lose their progress so often?

This sounds very cheesy now - but in Das Tal “the journey is truly the reward”. What I mean by this is that it’s not a game about amassing loot. It’s a game about constantly challenging yourself in an always changing environment. And that makes new game worlds so interesting.

One example: Say, over last week, you played on a game world where massive guilds with fully equipped mage spec groups have ruled the battlefield. Now you’re starting on a new game world. And here you think melee characters will be strong. So you create a new character, start roaming around solo with only a few abilities. And you get to start challenging those people from your last server - only now you have a new build they cannot deal with yet. You have adapted to a changed environment. They have not. That is super rewarding.

Most games shy away from features like friendly fire. Do you consider Das Tal to be for “hardcore” PvP fans only?

Most games also bore me to death. They force players to use the same old tactics that we have used for the last 15 years: Cluster up, spam AoEs, have the bigger group of players win. Das Tal requires you think differently. You cannot just charge into the enemy as a melee character since you do not want to prevent your archers from hitting. You cannot just spam AoE heals since you might actually heal your opponents. It’s actually harder for experienced players to un-learn their instincts here - newbies take super well to the control scheme since it feels very natural and close to what you would expect from reality.

How much emphasis is placed on clans in the game? Will players need to work together to defeat enemies and flourish?

That goes back to the “large and small events” that I talked about before. Solo players and people who can only log in for a short time will always have small goals that they can fullfill (get a new ability, upgrade my gear, solve a challenge) and find PvP targets in their size. But if you really want to be a political power on a game world, own the biggest settlements, and get ranked high in the clan rankings, then yeah - you should definitely get a few people together in a clan.

The environment in Das Tal is very unique in how it affects PvP, from tracking footprints to vision warfare. Do you plan to further expand the way the environment interacts with players?

Yes! I really want to start experimenting with different surfaces. So a thorn patch might damage you while you run through it, quicksand might pull you in, and on icy surfaces your char might slide around and be hard to control. And I still think it would be cool to be able to cut off tall grass with your scythe ...

Let’s talk about the Das Tal Summer Alpha that starts next week. What are your main objectives for the test?

The main objective for me is to find out how a bigger number of players interact in our new game world - which has been completely redesigned and is 3x the size of our old map. I also want to learn about how our players interact with the Challenge system and how newbies get along with our brand-new tutorial. Our newbie experience was pretty crappy before and should be way smoother now.

How will this Alpha vary from others in the past? What new features should players be looking towards?

I’ve already talked about the larger world map which comes with a number of new player buildings and massively increased settlement sizes. Plus, there’s now a fog of war over the world map which really encourages exploring and scouting. We’re also launching a new player class, the Phalanx, which utilizes a spear for mid-range attacks and a shield for protective abilities. We’re adding the Challenge system which will give all players solo feats to perform in order to customize their account with new avatars and titles. And then a plethora of smaller changes that would probably take up three pages worth of text if I was to write them down.

How big of a part have player feedback/suggestions played in the game’s development? Could you share a specific example?

Players were very vocal - and super useful - when it came to combat balancing. They have uncovered a number of cheesy tactics that we’re possible due to some design flaws in some older abilities (Stasis, I look at you!). Those are all fixed now. Our players also gave us great feedback about the respawn and siege systems which are still being improved to make them fit just perfectly for the game.

That depends on the feedback we get from players in the Summer Alpha. But I assume that we’ll have one more alpha in the winter and then hopefully a open beta / early access version in 2017.

Interested in playing Das Tal during the Summer Alpha event? We're giving away 1,000 keys on Friday, July 15, so check back then for a link to the giveaway page. The Summer Alpha event will start July 16, and you can learn more about it here. For more information on Das Tal, head on over to the Official Wiki on Gamepedia.