One of the oldest champions in League of Legends is getting the rework he deserves in Patch 6.14, and the Rift will probably never be the same.

Of the old arch mage, Korean League mid-laner and "Unkillable Demon King", Faker, said that to truly master the position, one should master Ryze. The combo-heavy nature of the champion allows him to be incredibly dangerous and versatile offensively, and knowing how to choose your battles and buttons effectively is tantamount to learning all of the important combat lessons League of Legends has to teach a player. Faker's Ryze game is prolific. He's never lost with Ryze in the pro scene. I'm going to trust his judgement.

In many ways, Ryze is a yardstick of how far the game has come since 2009's official release. He's been overhauled several times since then, with the last big one coming around the middle of last season. Even with all of the number tweaks that nerfs and buffs provide, he was still a fundamentally archaic champion. All of his abilities pretty much just caused damage, with the exception of Rune Prison, which rooted and caused damage. They were all targeted abilities besides his Overload, which was a skill shot. His ult powered up his normals and gave them unique properties, but he was pretty much a walking beatstick like many of the older champs.

In a more modernized League, these sort of things tend to stand out. Long derided support tank, Taric, was the butt of almost every joke imaginable up until his rework a few months ago for similar reasons. It's not that Taric couldn't work in the bottom lane across from some of the more eclectic modern champs like Bard, it's just the game was full of far shinier and more interesting options than the Gem Knight. In mid lane especially, new and interesting champions seem to always have a build that primes them for competent mid lane play, and choosing Ryze over true glass cannons with decent CC like Veigar always seemed like the last stand of a stubborn contrarian. 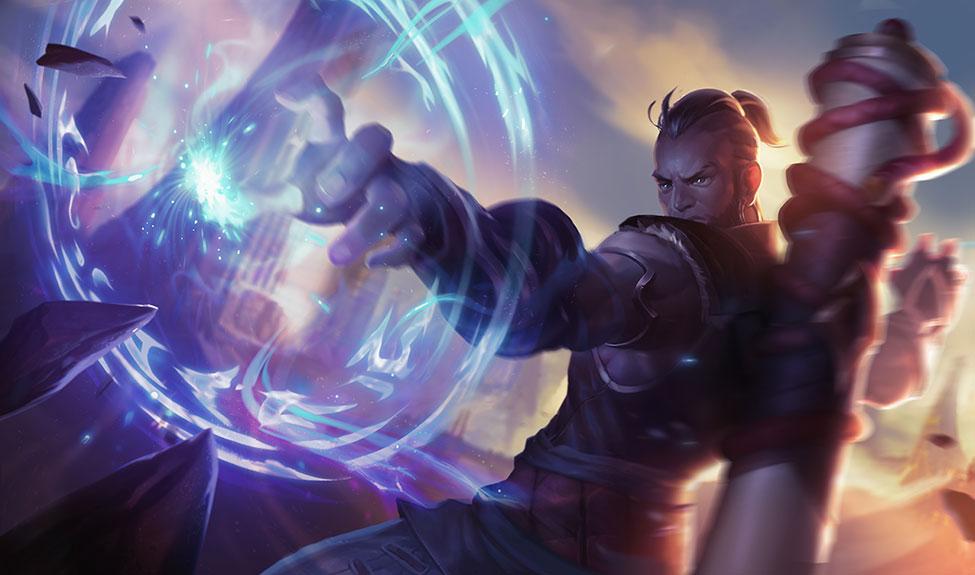 Even the myriad minor reworks - where maybe one ability gets a complete overhaul or a series of secondary effects gets swapped around - has helped Ryze's contemporaries find footing in today's League with far greater success than what he's gotten, and he's arguably the champion who's received the most of this kind of ability band-aid. Other old schoolers like Annie and Ashe have all been pushed into the present with well thought adjustments to their kits that give them a role in the game without compromising their identities. This all changes now.

From the top down, Ryze is a different animal. His passive, Arcane Mastery, now grants him more damage based on bonus mana, and his mana is increased by a portion of his ability power. This is a completely different version of his old Arcane Mastery, and now resembles Vladimir's Crimson Pact, essentially subbing Mana with Health. This means, as Ryze levels up and builds items, he scales on top of whatever bonuses he's gaining through his trips to the shop. He now has much more presence in the late game, something he desperately lacked.

His old version of the passive manifests itself in a new way as an effect of his new Q, Overload. It's still a skill shot that damages the first enemy hit, but that's only where the fun begins. Now, casting any other spell after Overload resets the cooldown of the Q completely. Casting any spell also generates a Rune. When Ryze recasts Overload with two Runes charged, he gets the shield and move speed bonus from his old passive for a short amount of time. If you cast Overload with only one Rune present, than nothing happens.

Think of it this way: switching back and forth between Overload and other spells keeps your damage output high. When things get dicey, though, you'll have the option to wait for that second spell Rune before casting the Q in hopes that the oncoming shield will save you from impending doom. Tactical options has always been the focus of Ryze play, and now he's got more of it.

Rune Prison is practically untouched. Point, click, and root the enemy for a time, leaving them helpless. As the damage and scaling may have changed, the application doesn't. Neither have the risks. Rune Prison is a risky move, because it's a close range spell that puts the caster in great danger. As always, if you're going to use it, make sure to make it count. When you see your Jungler coming for the gank or to intercept divers has always been my favorite applications for the ability. Though, we will all miss being able to Prison multiple targets in one cast.

His E, Spell Flux, got a big rework as well. It used to be a glowing ball that would bounce itself to multiple targets in a group, working its way back to the original target, whose magic resistance had just been reduced for a short window. Flux now does magic damage to just a single target, and marks it with Flux. If the target is killed by Spell Flux, the Flux condition spreads to nearby enemies. If a Fluxed target is hit by Spell Flux, the Flux condition spreads to near by targets. Lots of fluxing around here.

Putting Flux on targets is super important, because each of the Rune Mage's spells has an added effect on Fluxed champions. Overload deals bonus damage and will bounce to other Fluxed targets. Rune Prison will root Fluxed targets for a longer duration. This adds to Ryze's presence in team fights and his ability to wave clear while laning or split pushing. The combo angle is emphasized here as well. Now, knowing what order to use what ability isn't strictly a high level awareness test, but an actual game mechanic. There's a combo structure for every scenario (Riot's Champion Update page has some good ones), and the space to call your own plays on the fly is more present than it's ever been.

This is all before we get to his ultimate, Realm Warp. After choosing a location a short distance from Ryze, a portal opens up under him, teleporting him and anyone near him to the target location. The dive potential of this is amazing. Position yourself behind a tower or over a base wall for surprise sieges. Bring your assassin directly to the enemy back line to quickly tilt that pesky marksman. Bring some siege minions to a different lane. Hell, bring a Sion into unsuspecting roamers while he's mid-Onslaught. Reposition mid-team fight. The world is yours with Realm Warp.

Desperate Power was nice, but buffing yourself up is a one dimensional play call in a today's game, where movement and positioning is key. Shen and Twisted Fate can put themselves where they need to be to make plays, but Ryze can bring friends along. This has incredible potential on paper, and I can only image the sort of goofy, Bard-level plays that are on the horizon as soon as pro's start making runs at this guy. 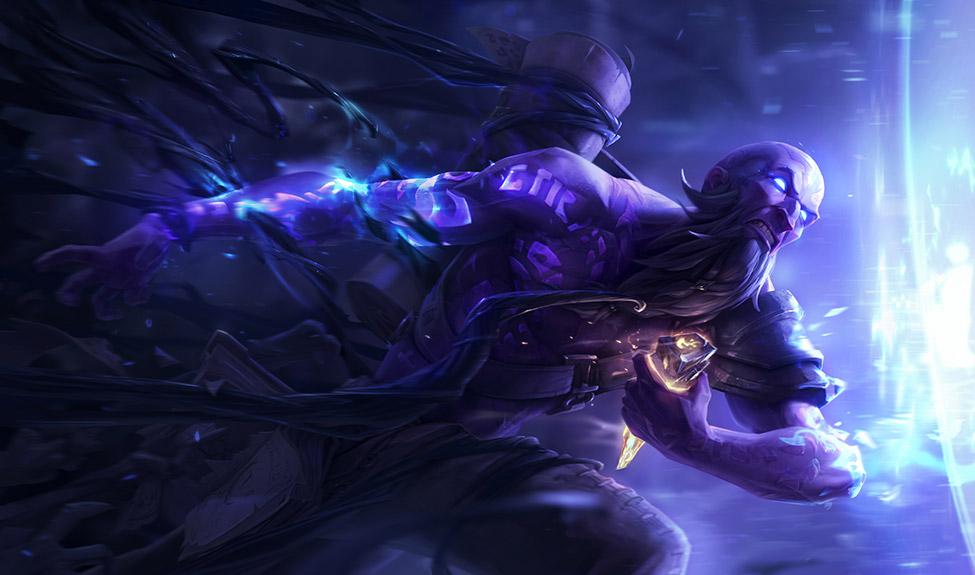 The rebalance and redesign of his abilities goes a long way towards further clarifying Ryze's mechanical identity. But awkwardly enough, Ryze is one of the few champions who never really had a strong narrative identity. He was blue, he was old, and he was impatient. But why? And what was the deal with that giant scroll? For the most part, none of these questions had good answers until now. Along side the focus on clarifying the give-and-take of playing as or against him, we now have a better understanding of why this nomadic mage wanders. Ryze is centuries old, thanks to his deep connection to the magical energies he wields, and he's on a constant journey to find ancient runes of great power and protect them from those who would use them for not-so-noble purposes. His time spent wandering has severed his connection to the civilized world, so he can come off as gruff and short without knowing it. It's hard out there for an archmage.

It's about to get harder for you and I out there in the Rift as well. Ryze isn't the only big thing happening this patch. If you want to know more about the changes, including the big nerfs on some the strongest champs this meta, check out the Patch Notes blog on their website. Let us know how being blue is treating you on Facebook and Twitter, and don't forget to drop by the Leaguepedia, where we will all cross our fingers and hope Faker actually plays Ryze this season.