Arthur Hastings is the main protagonist in We Happy Few, the indie survival game that just entered Early Access today. While not all of his story has been revealed, we have learned quite a bit about him so far.

When you’re first introduced to Arthur, he’s sitting as his desk in City Hall. He works as a Redactor in the Department of Archives, Printing and Recycling. As a Redactor, also known as a government censor, Arthur spends his days approving or censoring articles from the past. Arthur’s office displays an Employee of the Year award, and it seems safe to assume that he’s a hardworking, dedicated individual.

Arthur appears to be friends with the majority of his coworkers. He comments on having created a handmade card for his friend Prudence, and he attends a co-workers birthday party in the game. There is evidence, however, that his co-worker Clive isn’t a fan of his. Not only did Clive warn Victoria Byng, Arthur’s boss, that Arthur might be a downer, but he also vandalized a picture of Arthur as Employee of the Month.

In the opening sequence of the game, Arthur stumbles upon an article that features his brother Percival Hastings, or Percy, and himself from their youth. Immediately, Arthur begins to remember his tragic past. In his mind, Arthur can hear Percy calling out to him frantically, as well as the sounds of whistles, what seems to be a train, and complete chaos. It’s evident that something terrible happened, and he’s starting to recall the memory. 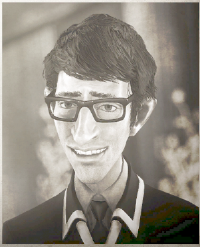 Of his history, we know very little. From an obituary displayed at a game demo earlier this year, we know that Arthur Ernest Hastings was born on August 12, 1934, making him around thirty-years-old at the start of the game. In his youth, Arthur was the editor at Writhlington School’s newspaper, and he won the Radstock prize for his essay “Into the Bright Future.” Additionally, he is a member of the Religious Society of Friends and loves tennis. It’s also revealed that Arthur has an uncle named Norton Keynes and a pet gecko named Sparky.

When loading the game, you’re informed that the main characters’ stories aren’t available outside of the game’s intro, and they won't appear in-game until version 1.0. This means we still have plenty more to learn about Arthur and his harrowing journey to escape Wellington Wells.

Learn More on the We Happy Few Wiki

What is Joy in We Happy Few?