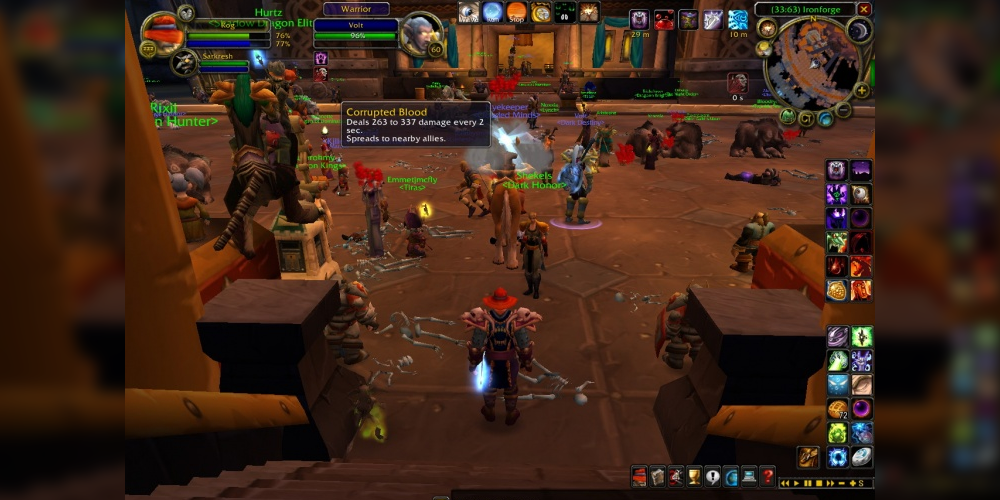 On this day eleven years ago, a terrifying plague struck Azeroth in a way many veteran World of Warcraft players will never forget. Skeletons blanketed the streets of cities as Corrupted Blood spread across continents, instantly killing low-level characters and even infecting NPCs. It was a panic-inducing, chaotic, and unintentional event that Blizzard fans fondly remember. Here's how it happened.

When Patch 1.7.0 released on September 13, 2005, Zul’Gurub was finally available for players – and that’s where the Corrupted Blood Incident all started. Hakkar the Soulflayer, the final boss in the 20-player raid, would cast Corrupted Blood on players, a debuff that would periodically sap their life. Once it was cast on a player, the debuff would spread to others nearby; a familiar mechanic for many – but things got complicated when it was realized the debuff could exist outside of the raid.

Pets and minions would contract the disease, be dismissed, and then be summoned outside of the instance with the debuff still applied. You know how this goes. From there, the plague spread quickly from player to player. The debuff would only disappear in one of two ways: it'd eventually time out (best case scenario) or you'd unfortunately die. Higher level players could keep themselves alive, but lowbies didn't stand a chance once they were infected.

Corrupted Blood greatly impacted cities such as Ironforge, which were littered with corpses and occupied by hundreds of ghost players too frightened to reclaim their bodies. Many avoided urban areas completely, while some just temporarily stopped playing the game. This persisted until Patch 1.8.0, which made it so pets could no longer receive the debuff and the disease could not exist outside of the instance. At last, the plague was stopped.

Eventually, the incident was researched in the real-world to better understand the spread of diseases within populations. The Centers for Disease Control and Prevention even contacted Blizzard for statistics. It was a great model, and an outbreak that was talked about well outside of the typical gaming community.

Despite this being an accidental and somewhat traumatizing event, many players look back on it with happiness. Though a bit inconvenient, it was rather amusing – and it would eventually become a model for the Zombie Infestation Event that was used to promote Wrath of the Lich King. Now, over a decade later, we’re remembering the Corrupted Blood Incident and its impact on our World of Warcraft experience.

For all of your World of Warcraft questions, visit Wowpedia.