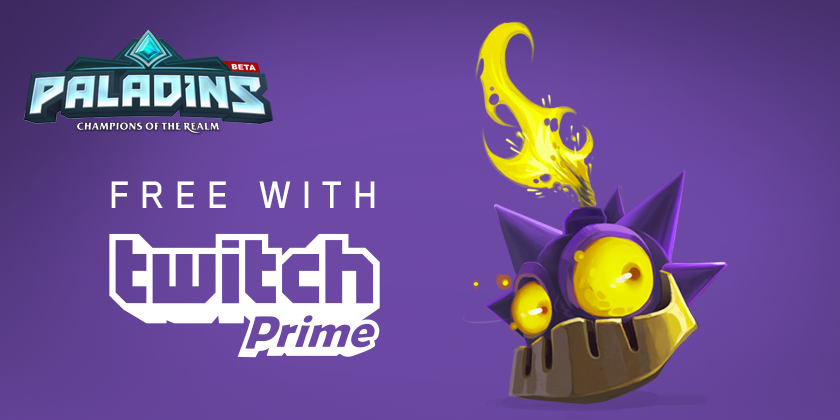 Last week, gamers were introduced to Twitch Prime, the new feature of Amazon Prime that has a variety of awesome benefits, including exclusive game content. For example, if you sign up for Twitch Prime before October 13, you’ll be able to grab a Twitch-branded skin for Ymir in Smite and a weapon skin for Bomb King in Paladins. That’s two amazing skins for two of the hottest free-to-play multiplayer titles - and you only have 10 days left to claim them with Twitch Prime.

New to Hi-Rez games? Well, there’s a reason Paladins, the free-to-play team shooter that launched its Open Beta last month, is one of the top games on Steam right now. It has a diverse cast of Champions to suit your personal play style, fast-paced matches, and straightforward mechanics. If tossing purple Twitch bombs as His Majesty the Bomb King sounds like something you’d be interested in, you can see the exclusive weapon skin in the video below.

This new title, in addition to Hi-Rez’s smash-hit MOBA Smite, proves that Hi-Rez knows what it’s doing when it comes to free-to-play multiplayer games. In Smite, Ymir is the club-wielding Father of the Frost Giants, and you can check out his exclusive Boss Ymir Skin below.

This exclusive content is only available for another 10 days. Grab Twitch Prime and claim your awesome skins for Smite and Paladins before October 13.

Why Arena Brawler Battlerite Is Topping the Steam Charts