The path to saving the world in video games tends to be so violent. Slay the monsters, depose the evil king, and rescue the princess at the point of a sword. Yonder: The Cloud Catcher Chronicles offers a gentler way to become a hero - one that involves cooking, crafting, fishing, and farming. Gamepedia and the game's developer, Prideful Sloth, are pleased to announce the Official Yonder: The Cloud Catcher Chroncles Wiki.

An evil murk has settled on the lush island of Gemea, putting despair in the hearts of its people and causing them no end of trouble. It's up to you to join up with the magical Sprites to stand against the murk and save the people of Gemea, exploring a vast open world with eight unique biomes and righting the wrongs the evil has created all at your own pace. 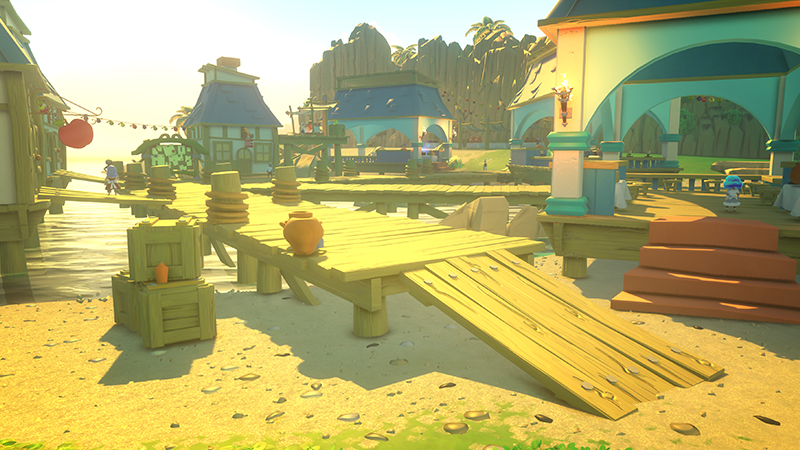 You've got to master professions from carpentry to cooking in order to help Gemea's population, all so you can forge relationships with residents and solve their problems. In return, you'll get access to new resources and even new farms spread across the island's varied locations, giving you access to even more materials for bigger, better building. A story unfolds along the way as you revitalize the land, letting you learn about the island and yourself along the way.

The world is a living one, with day and night cycles alongside changing weather effects and the passage of seasons, affecting the paths you can take around the island and the migration of its animal population. Oh, did we mention the adorable animals? You can befriend these little guys to get new companions on your adventure.

Even with the future of Gemea on the line, how you spend your time is up to you. You can go questing or you can hang out and throw rocks around. You can build up your farm or spend the afternoon fishing. The objectives offer multiple paths to completion, and the gorgeous world will keep you coming back.

Enjoy some footage of Yonder in action:

Yonder: The Cloud Catcher Chronicles blends the best of Zelda-style adventure with the slower-paced life in games like Stardew Valley and Harvest Moon, and it's available now on Steam. If you need some help digging into all the resources you'll need and the jobs you can do, be sure to check out the Official Yonder: The Cloud Catcher Chronicles Wiki.