It’s been a long time coming, but we can finally play the latest from Epic Games. Fortnite has at last reached Early Access, bringing its combination of sandbox survival and cooperative shooting to PC, Mac, and consoles.

Fortnite will have you building a stronghold by day, and defending that fortress against waves of monsters by night. Those monsters are the product of an encroaching darkness called the Storm, and when the clouds roll in, it’s time to fight. Pushing back the Storm means closing the Gates located throughout the world, but to survive that long you’ll need to build a strong fort to take refuge in. 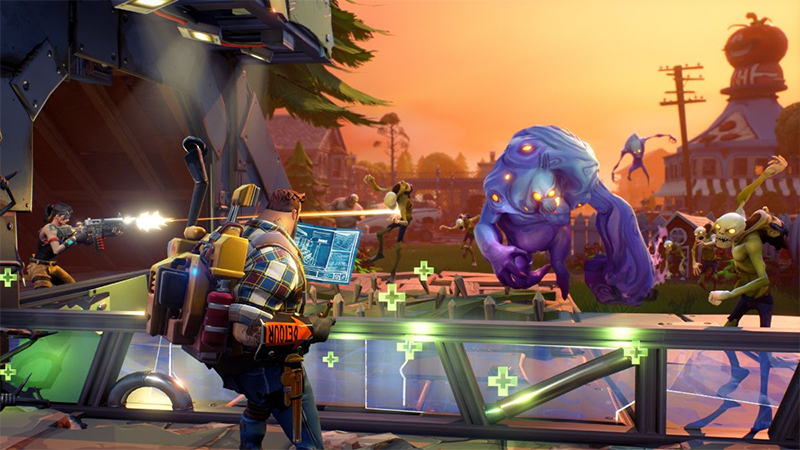 That means exploring the abandoned world, tearing down houses to find weapons, traps, and resources that you can use to strengthen your base and upgrade your arsenal. You can easily edit any part of your base, putting in arches and doors wherever you want. Of course, you’ll also need to repair damaged structures — sometimes even in the heat of battle. It’s not all about building a home, either. You can build traps to thin the monster numbers, and all kinds of weapons ranging from assault rifles and shotguns, to swords and hammers.

Your heroes come in four flavors, but collecting new character cards will give you specialized variations with even more unique abilities. Soldiers are best suited to straight-up action, with skills and abilities that are all about dealing big damage to incoming enemies. Constructors have access to cheaper and stronger building options. Outlanders are best at gathering materials, with abilities that let them collect more resources at a faster rate than their companions. Ninjas are all about mobility, moving in quickly to deal devastating blows to the bad guys.

Enjoy some footage of Fortnite in action:

Fortnite was announced over six years ago, and while it’s been a long road to release, we still can’t wait to check the game out for ourselves. You can buy into Early Access today on PlayStation 4, Xbox One, or PC and Mac through its official website. The finished product will be free-to-play, and is expected to release sometime next year. Be sure to check out the Gamepedia Fortnite Wiki for details on everything you’ll need to survive the coming storm.

Dream Daddy Complete List of Dads: Which Dad Is Right for You?

Date the Dad of Your Dreams in Dream Daddy: A Dad Dating Simulator