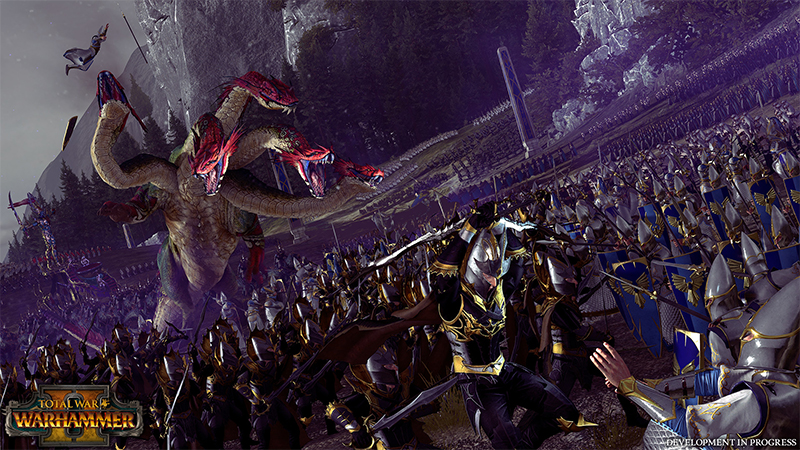 How do you follow up a tremendous strategy game that combined the classic tactical gameplay of Total War with the brutal fantasy of Warhammer? More races, more units, and more ways to bend the world to your will, of course. Total War: Warhammer II expands on the original with a massive new map set across four continents and an entirely new set of factions with their own magical or beastly ways of making war.

Like every Total War title, you’ll be challenged to build alliances, mass armies, and make war on a massive turn-based strategy map, while doing battle in intense real-time scenarios that force you to use real-world tactics—only now, those real-world tactics are upended by the presence of massive beasts and powerful magic, and heroes who can level up, acquiring new skills and tracking down legendary pieces of gear.

Total War: Warhammer II adds the magical, disciplined armies of the High Elves as well as their twisted cousins, the Dark Elves, to the new campaign. Even more fantastic are the Lizardmen, who ride into battle amid dinosaurs and saurian allies, and the Skaven, whose skittering masses can quickly overwhelm their enemies. Each faction has two unique lords to serve as your avatar in battle, with their own starting positions and relationships to other clans.

Enjoy some footage of the new factions in action:

The new Great Vortex campaign has all four races working to take control of a magical cataclysm, whether to prevent it or direct it for their own ends, and you can tackle the story either own your own or in co-op with a friend. If you own both the original and Total War: Warhammer II, you’ll also soon get a free update called Mortal Empires, which combines the new and old maps into a single, massive campaign with over a hundred different factions spread across every available race. You’ll even be able to take your original Total War: Warhammer races into battle online.

It’s a massive new game that takes what was great about the original and loads it up with new races, new campaigns, and new ways to play, and with all your old stuff carrying forward—and loads of free stuff on the horizon—the world of Warhammer is getting even bigger. Total War: Warhammer II launches for PC on September 28, and for more detail be sure to check out the wiki.

Did You Catch These Sonic Mania Easter Eggs?