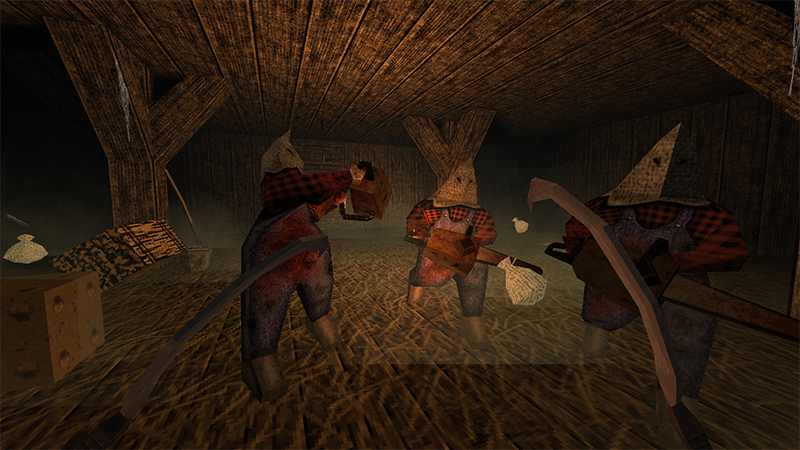 The 90s were a special era for shooters, with lightning-fast twitch gameplay ruling the day before the advent of cinematic set pieces and stealth sections. As great as those modern shooters can be, there’s just something about the chunky visuals and pixelated ultraviolence of games like Quake and Hexen. Now, Dusk is here to remind you it’s not just nostalgia— that gameplay is just as tight and satisfying 20 years later.

One look at Dusk makes its inspirations clear, and it’s got all the rocket jumping mayhem you could hope for from a vintage FPS. Through 33 levels spread across three episodes, you’ll be doing battle against redneck cultists and possessed soldiers alongside far more monstrous foes, and you’ll be doing it all at a breakneck speed that will challenge your reflexes with weapons like shotguns, rifles, and riveters.

Those levels are also filled with secrets and alternate paths to uncover, leaving you plenty of ways to play however you want. Feel the need to escape the violence and rocket jump some boundaries to a pacifist victory? How about navigating your way to a speedrun record? Dusk supports all that.

It also supports classic arena multiplayer through its DuskWorld mode, pitting you against others to see whose reflexes come out on top. Plus, the solo action never has to stop with the inclusion of Endless Survival mode, challenging you to survive wave after wave of enemies.

So whether you’re nostalgic for a bygone FPS era or just hungry for some fast-paced shooting action, Dusk has you covered and is now available in Early Access on Steam. Players who purchase the game while in Early Access get immediate access to Dusk's first two episodes, two different Endless Arenas and the open beta for DuskWorld multiplayer. As for when Dusk will officially launch outside of Early Access, the development team doesn't have an exact date as of yet but says the full game is on track to release in the next few months. For more details on the horrors you’ll face and the arsenal you’ll use to destroy them, be sure to check out the Official Dusk Wiki.

Awesome Games Done Quick 2018: What And When To Watch