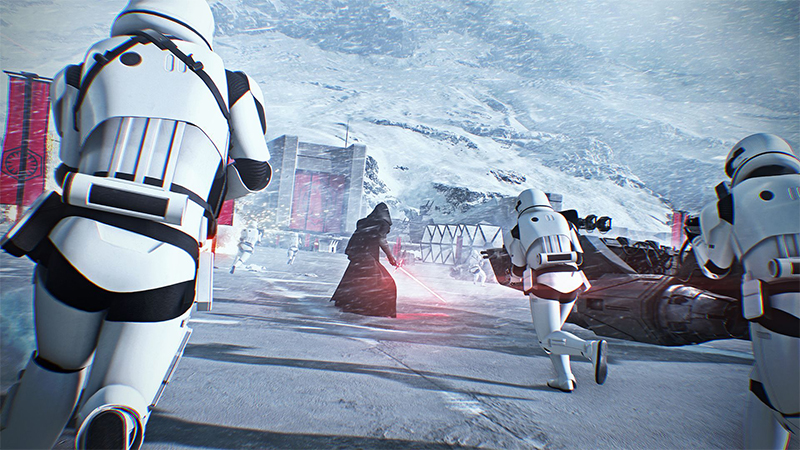 From the sand-swept bazaars and cantinas of Tatooine, to the wartorn beaches of Kashyyyk, and the frozen wastes that cover Starkiller Base, Star Wars Battlefront 2 offers massive multiplayer battles across all three eras of cinema’s biggest sci-fi universe. With far more maps and modes than the original, plus a full single-player campaign, the sequel promises an epic return to the galaxy far, far away.

The heart of Battlefront 2 is in its online battles, particularly the 40-player Galactic Assault maps, which see massive armies pushing back and forth across a series of objectives. On Hoth, the Empire tries to bring the might of its AT-AT walkers to bear against the Rebel base, while the Rebels attempt to coordinate attacks to prevent that from happening. If the Empire manages to advance, a new set of objectives spring up inside the Rebel base – and the battle rages on until either the Imperials have taken the entire outpost, or the Rebels have fought back every last Stormtrooper.

Four basic trooper types – the straightforward assault fighter, the big, blaster-toting heavy, the sniping specialist, and the team-boosting officer – serve as the basic ground troops in each match, but you’ll have the opportunity to hop into walkers, X-wings, TIE fighters, and more, as the match progresses. You may even have the chance to step into the shoes of one of the series’ most iconic heroes like Boba Fett, Darth Maul, Rey, and Yoda.

If you want to stick to dogfighting, you can do just that in Starfighter Assault mode, while the Heroes vs. Villains mode lets you immediately take on the role of your favorite major character in four-on-four matches. Add to that the smaller team objective mode Strike, and the all-out assault of Blast – not to mention the single-player and co-op objectives of Arcade mode – and you’ve got a whole lot of intergalactic warfare to participate in.

Last but not least, there’s the campaign, which casts you as one of the Empire’s most loyal servants following the death of the Emperor and the destruction of the second Death Star. As Iden Versio, commander of the Empire’s elite Inferno Squad, you’re tasked with crossing the galaxy to stomp out the Rebellion’s newfound sense of hope.

With more maps, more modes, and a full story campaign, Battlefront 2 is poised to fulfill the promise of DICE’s original galactic shooter. If you want to dive in early, the game is available now through the Elite Trooper Deluxe Edition, and will be available for standard purchase on November 17 across PlayStation 4, Xbox One, and Origin. For more details on how to restore peace – or violently-imposed order – on the galaxy, check out the Star Wars Battlefront Wiki.