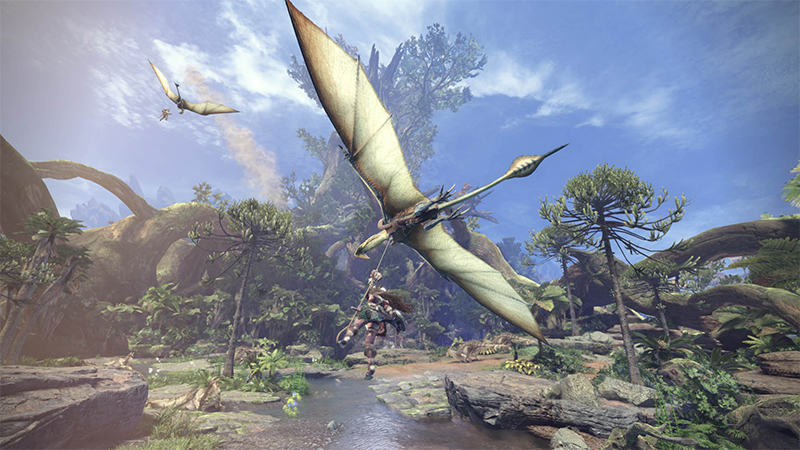 Monster Hunter: World is meant to be the one where the series finally sheds its niche reputation outside Japan and becomes the worldwide success that Capcom always dreamed it could be. By all accounts, World might just do it — it’s a massive, gorgeous take on the series that sands away the rough edges while hanging onto the quirk and tactical charm that defined Monster Hunter in the first place.

If you’re not familiar with the series, the Monster Hunter name pretty much tells you everything you need to know about the setup. There are monsters, and you hunt them. The goods you harvest from the monsters you’ve slain can be used to craft ever more epic bits of gear, which will let you get equipped to take on ever more dangerous monsters.

Prospective hunters have been kept at bay all these years in part by stiff controls, and World plays like a dream by comparison. Locking onto monsters, wielding your weapons, using items, and exploring the map all feel more natural and intuitive than ever before, and that’s good news for new players and old hands alike.

The hunt still has you carefully watching your prey, trying to predict their movements so you can attack when they’re most vulnerable. Every one of the 14 different weapon types feel completely different, letting you pick your own style from the straightforward hammer to the speedy dual blades. Monsters will get injured and tire during fights, and an effective hunt is all about understanding those tells so you can take your prey down.

Here’s what Monster Hunter: World looks like in action:

With improved controls, a more extensive story, and all the depth the series is known for, Monster Hunter: World looks to be exactly the game you’ve been waiting for, whether you’re a newcomer or a veteran hunter. It’s available now on PlayStation 4 and Xbox One, with a PC version is set to release later in the year. For details on all your quarry, be sure to check out the Monster Hunter: World Wiki.