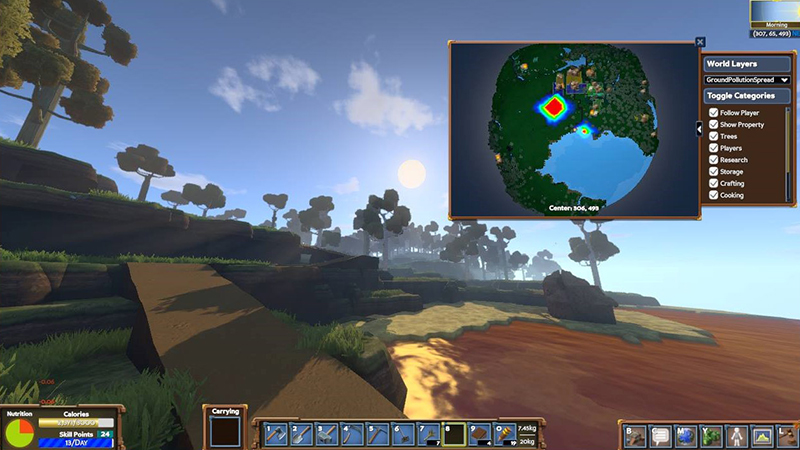 There’s a meteor hurtling toward the earth, and the only way to save the planet is by building a civilization with the technological means to stop it — without polluting the planet to death in the meantime. Eco is a robust ecological simulation that has players work together to build their own economy and government while balancing the needs of the environment in order to continue thriving.

Players can build farms, hunt, and organize into towns. They can also build infrastructure, power plants, and research new technology. Eco’s online world has players contracting themselves out for work and trading goods to build an entirely player-driven economy. Eventually players can form their own government system, complete with elections, taxes, and entirely customizable laws.

Those laws are essential because of Eco’s lively simulation of flora and fauna with interconnected relationships. Natural forests provide a habitat for creatures to hunt, but chop it down and your source of food is gone. Toxic waste will similarly poison your rivers and farms. It’s up to you — and your fellow players — to build a sustainable economy and government that can protect the world without killing it from the inside.

After a successful Kickstarter and years of alpha development, Eco is finally available on Steam Early Access, with a year’s worth of balance updates and new features to come before the final release. For more on how to save the digital planet, be sure to check out the Official Eco Wiki.

Monster Hunter: World Is the Hunting Game Veterans and Newcomers Have Both Been Waiting For

So You Want To Play Monster Hunter: World? Here's What You Need To Know Going In