Path of Exile’s Bestiary League and content update is arriving on March 2, and it’s larger than almost all previous expansions. You’ll capture dangerous beasts, encounter new end-game foes, battle The Elder and The Shaper together, and finally discover what’s behind that chained door. I sat down with Producer and Lead Designer Chris Wilson last week to get the details, so let’s jump in.

Capture the majestic wildlife of Wraeclast...

In the Bestiary League, you’ll venture far and wide to capture beasts of different categories and tiers. There are around 250 different regular beasts and 40 legendary beasts, some of which are more rare than others. To capture a beast, you’ll want to weaken it and then throw a net to hold it in place. 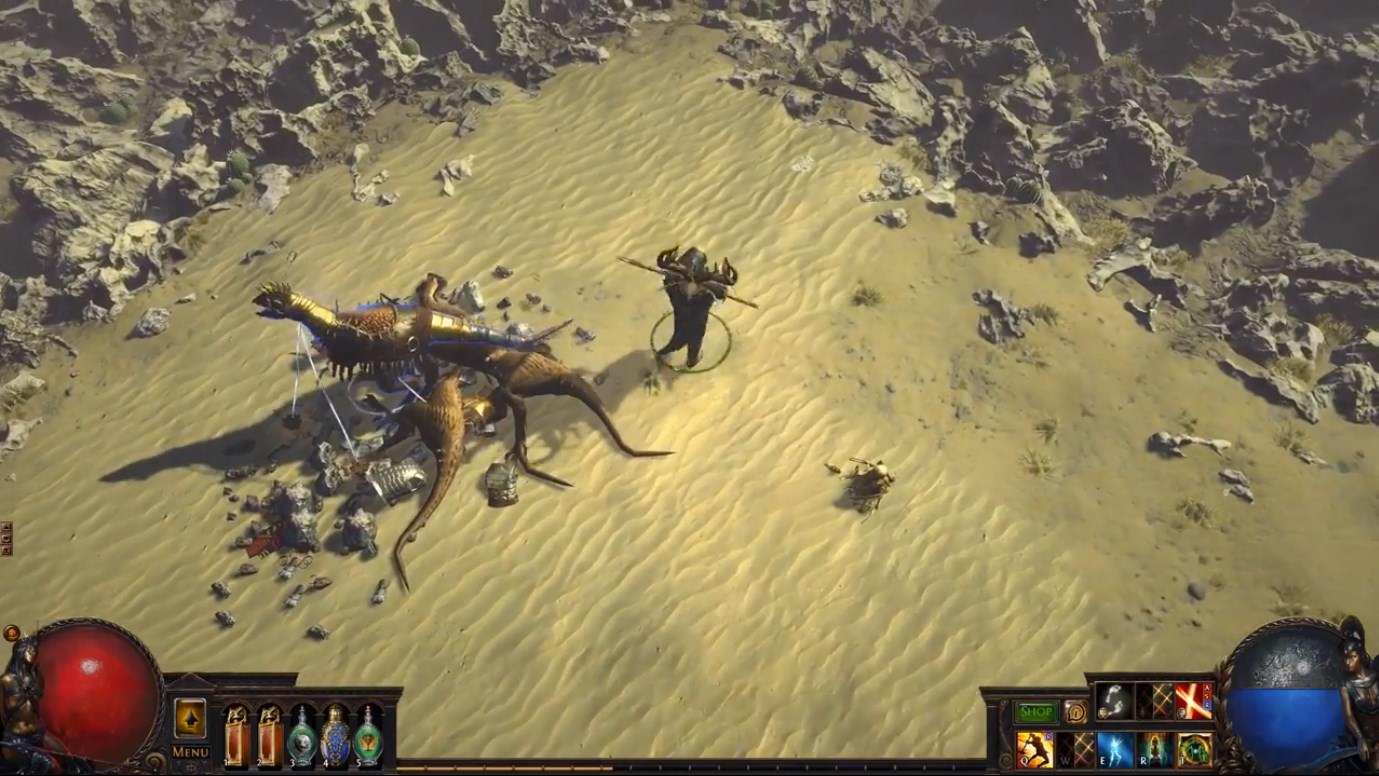 After a couple of seconds, you’ll know whether or not the capture was successful. If it succeeds, Einhar Frey, a new NPC in the Bestiary League, will appear from a portal to transport the beast back to your menagerie. (Your menagerie is a private area where you can invite friends, and it has themed areas for all of the different beasts you’ve captured.) If it fails, the beast will be freed and become enraged.

After capturing beasts, you’re free to go visit them in your menagerie. You’ll receive no judgement from me, Exile, if your main goal in the Bestiary League is to build a really cool zoo. However, that’s not really the purpose of all of this; Bestiary is very much a crafting league. 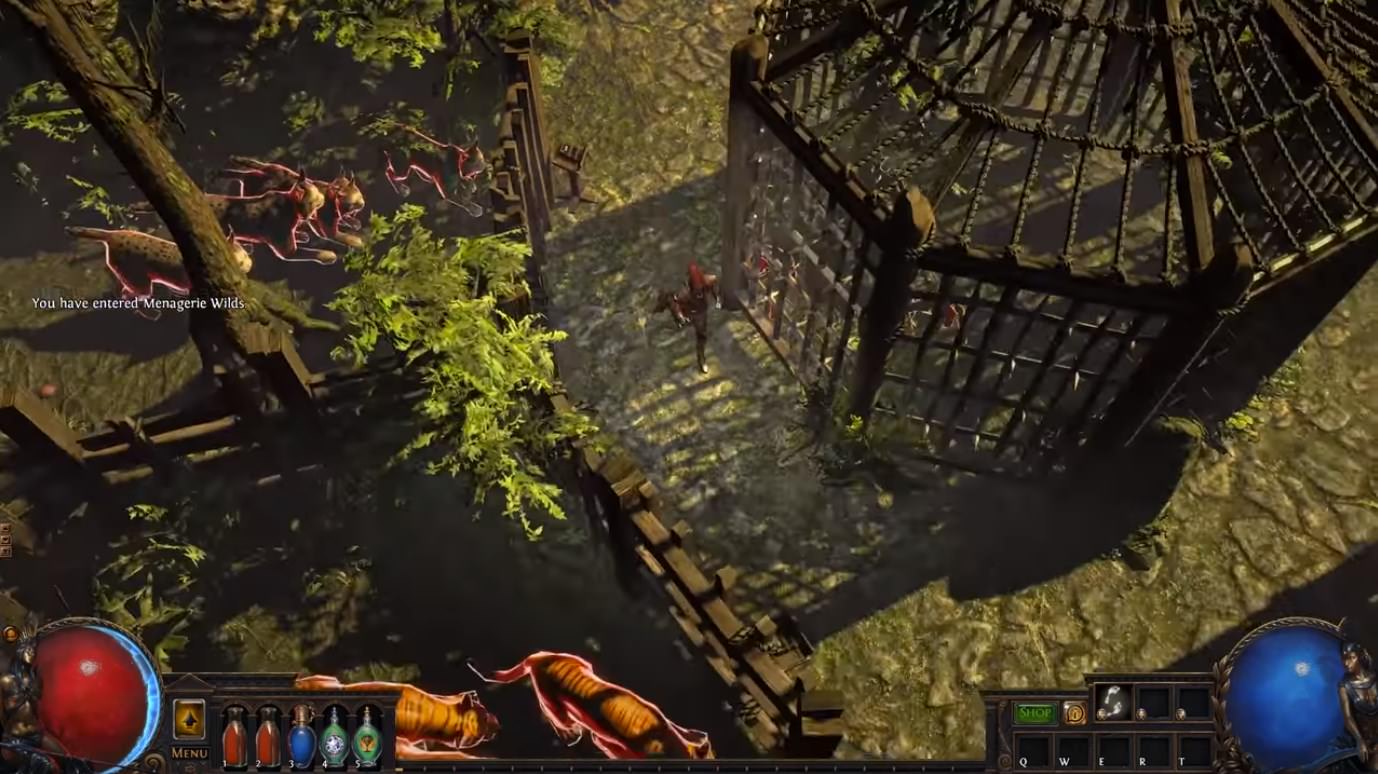 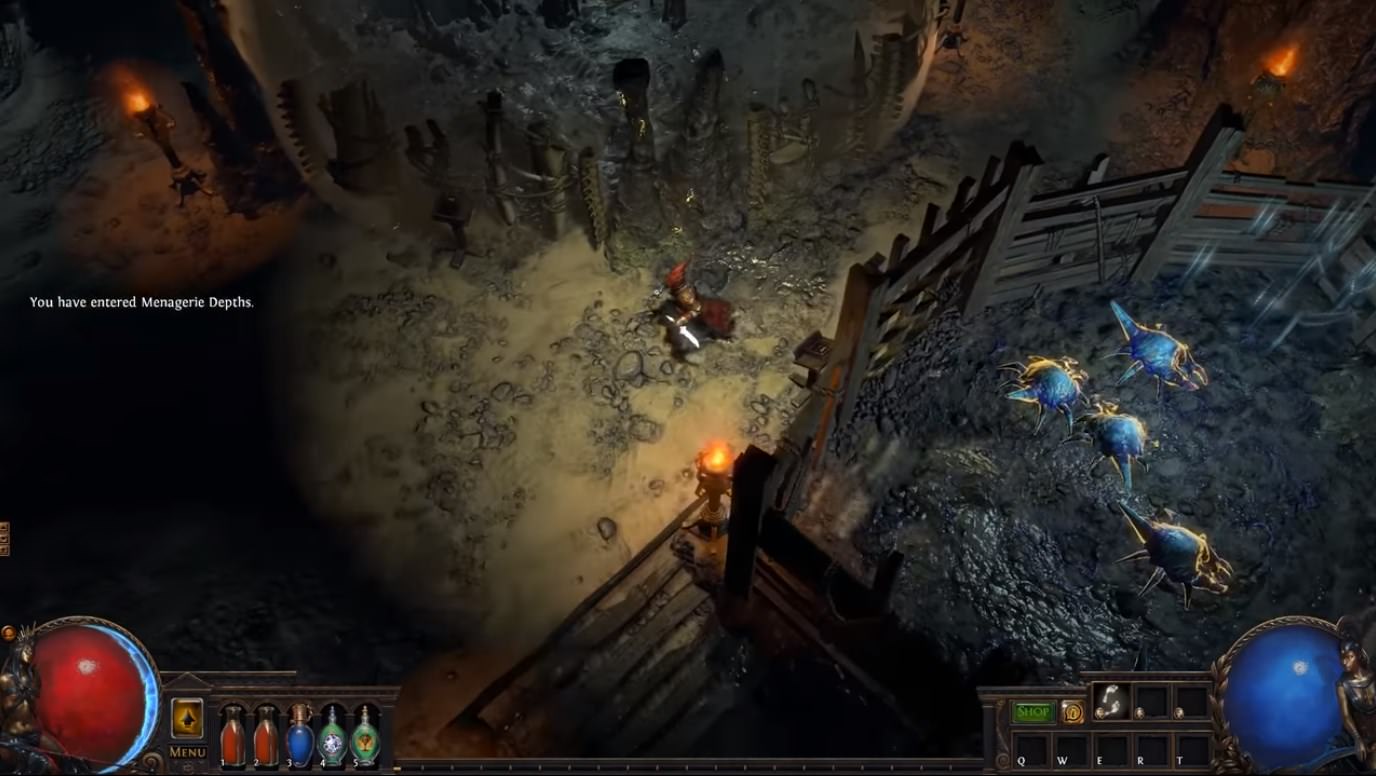 ...and then slaughter them.

Similar enough to grinding down cute Pidgeys in Pokemon Go for candy, you’ll be sacrificing the beast you capture in Wraeclast for crafting. Performing sacrifice by combat at your blood altar (located inside your menagerie) will allow you to craft and augment items, and there are dozens of recipes that require different beast combinations. 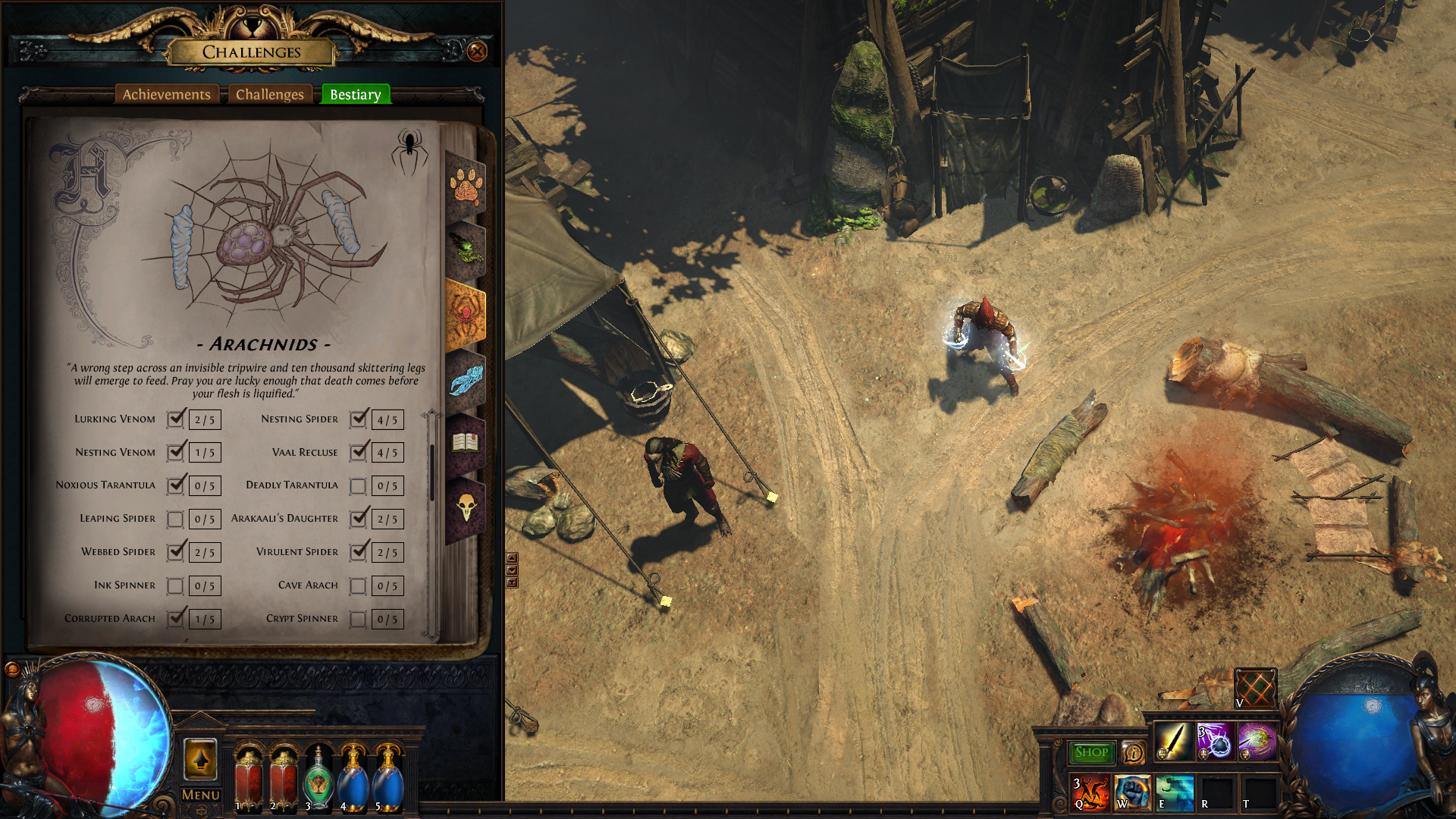 The recipes in this league have given Grinding Gear a unique opportunity to bring back certain elements of the game that were previously removed, such as imprinting. Because the Bestiary recipe specifically limits imprinting to magic items, it helps to mitigate the extreme power and advantage of imprinting. In another example, Grinding Gear can mimic the functionality of the Mirror of Kalandra (which allows you to create a mirrored copy of an item) by having a recipe that will let players duplicate a flask. 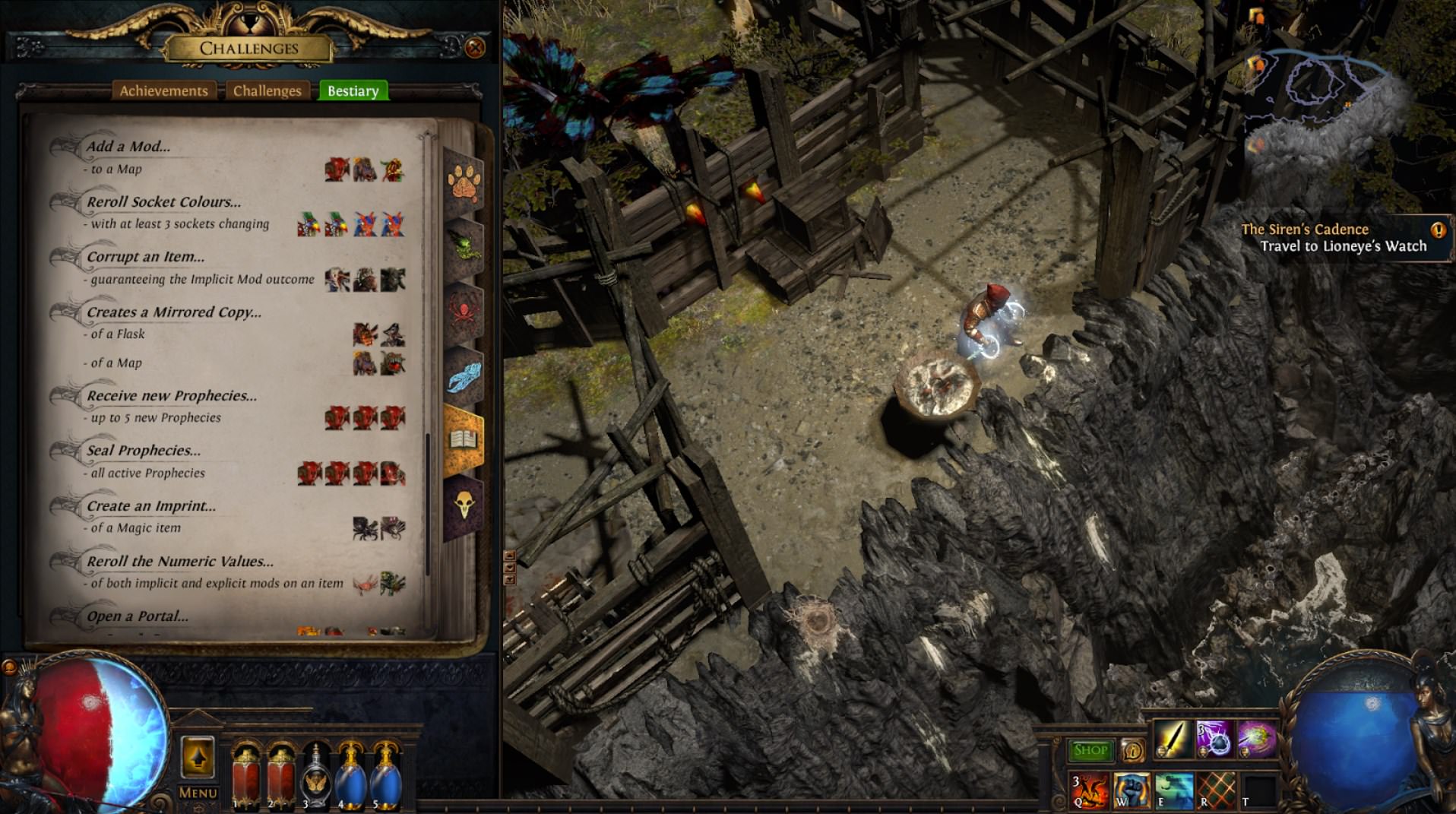 By putting these small fences around powerful advantages, recipes can impact Path of Exile in a completely unique and awesome way.

Don’t freak out, but we’re going to talk about sets.

When you hear set items, you normally associate them with constraint. Every player is chasing after the same set because it’s clearly the best option, and it can sometimes feel like sets limit player creativity and freedom.

The scenario above is not what you’re going to see in Path of Exile.

In the Bestiary League, you can open portals to spirit beasts via crafting. In addition to being able to capture these spirit beasts to use in your own crafting, there are also four new sets of items based on these powerful beasts. The example set used in my interview with Chris showcased the Craiceann Armor Set, which introduces the concept of crab barriers, a defensive growth on your armor that regenerates over time.

The most important aspect of these set pieces are that there’s no “best” combination. Everyone in the Grinding Gear office has different thoughts on which combinations work best for their characters, and there are many ways to build around the items.

This is all the information I have to share regarding the new league, but there are plenty of additional Path of Exile changes to discuss. Let’s pivot to the Atlas.

An unfinished story sits before you. You’ve fought both the Elder and the Shaper, but the fate of the Atlas still hasn’t been sealed.

Now, when you obtain the 15th memory fragment, you’ll be able to open the infamous locked door and enter the Shaper’s laboratory. Inside, you’ll obtain the Elder’s Orb. This powerful orb will allow you to upgrade the tier of any map on the Atlas to Tier 16, making it the hardest content in the game (so don’t make this decision lightly).

Once you’ve transformed the map’s tier and completed the map, you’ll find yourself in a new situation. You’ll approach the Shaper being corrupted by the Elder, and you’ll watch as the Elder carries him through a portal in front of you. Naturally, being the wise and level-headed Exile that you are, you’ll follow.

For the first time, you’ll be fighting the Elder and the Shaper… simultaneously. The two fights you’re familiar with have been stacked on top of each other. The mechanics have been tweaked slightly, but they’re essentially the same fights. The Elder will be spawning waves of minions while you’re attempting to dodge the Shaper’s yellow beam. Yeah... good luck. 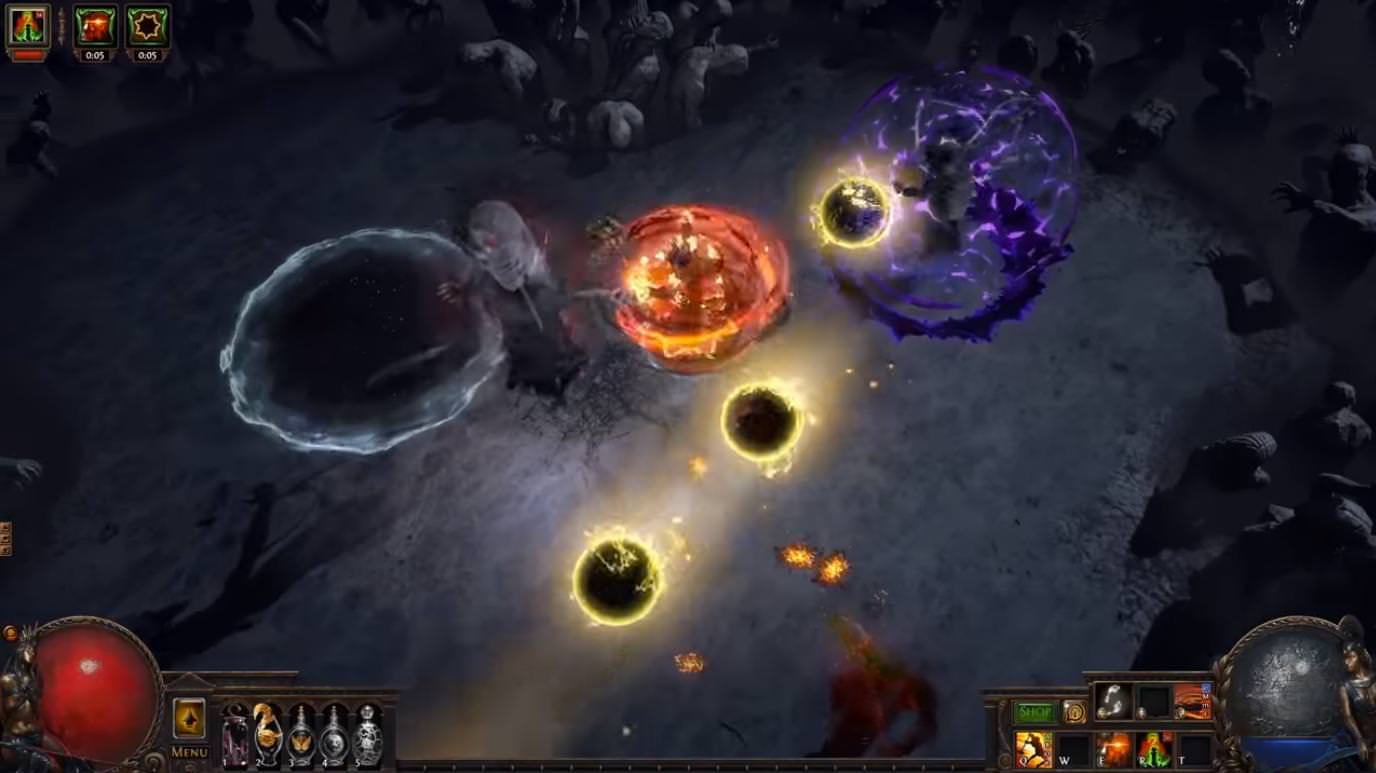 As of this time last week, no one in the Grinding Gear office had completed this fight. In fact, even capturing video footage of this encounter was difficult. With this in mind, it’s safe to say this encounter is for the most elite players in the game.

Once the Elder and Shaper have been defeated, how will that impact the Atlas? We'll have to wait and see.

With the content update, 29 new unique items are being added to the game. The example used during our interview was Voidfletcher, which utilizes void charges to increase your damage. These new items will be very expensive and require a lot of effort and attention to utilize properly. For instance, void charges have a regeneration rate of 1 per second, so it’s best to make sure your character doesn’t attack faster than once per second so you can take full advantage of the void charge’s benefits. 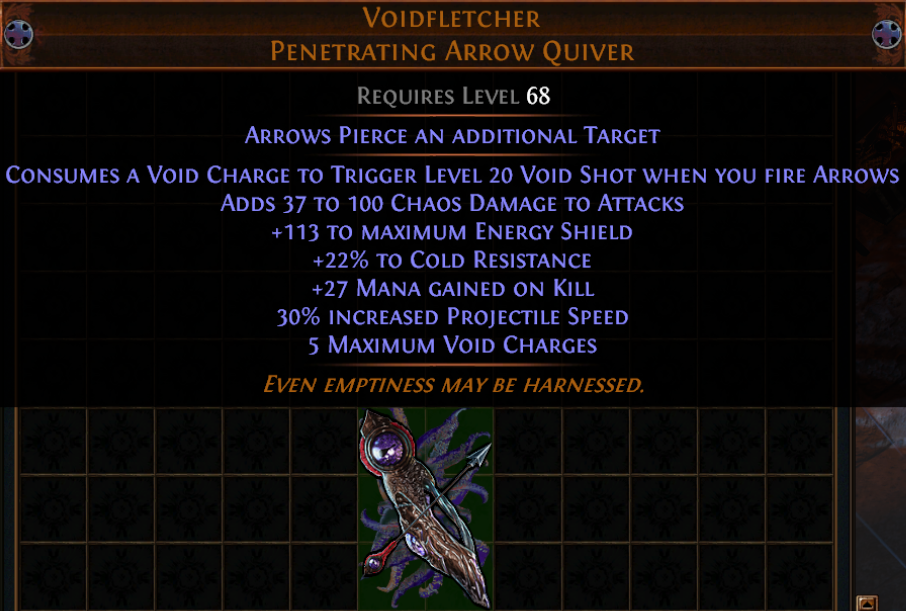 Additionally, new prophecies are being added, allowing you to transform items into one of 30 new fated uniques.

I’m pleased to inform you that you can now throw your shield! Thanks to the new Spectral Shield Throw skill, players can throw their shield and damage enemies based on the armor and evasion values present on your shield. While a shield’s actual defensive properties are usually ignored for better mods, that’s going to have to change if you’re interested in destroying enemies a la Captain America. See the skill in action in the official trailer at 1:17.

Additionally, Summon Phantasm on Kill is a new support gem that will summon a phantasm when you kill a monster. These phantasms shoot projectiles, can distract enemies, and they can benefit from other support gems.

When I asked about how long the phantasms last and if there was a cap, Chris noted that the phantasms usually don’t expire on their own (they’re normally killed) and that the cap is very high. This support gem is basically designed for you to have a giant Army of the Dead. 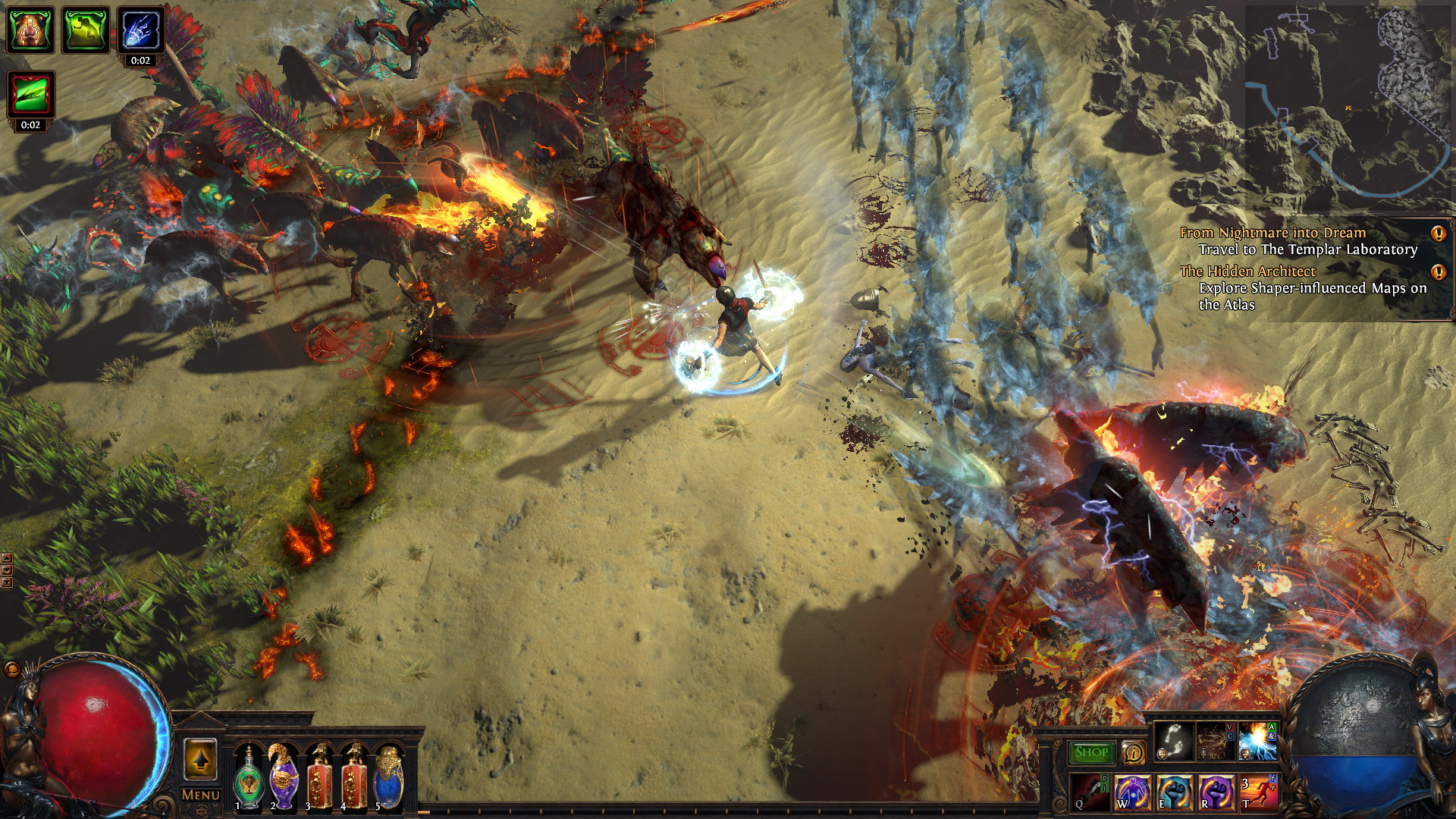 This gem is available at low levels, so you’ll be able to utilize its awesomeness for essentially the entire league. It’s worth noting here that there’s another new gem, but it wasn’t yet revealed during my talks with Chris.

Giving classes their identities back with a revamp.

Classes in Path of Exile were originally designed with a strong class identity. However, over time, the classes became a bit muddled, and it seemed there were less and less viable classes to choose from.

With this class revamp, less popular classes will be receiving buffs, and Grinding Gear has worked to make sure each class has their own unique benefit. 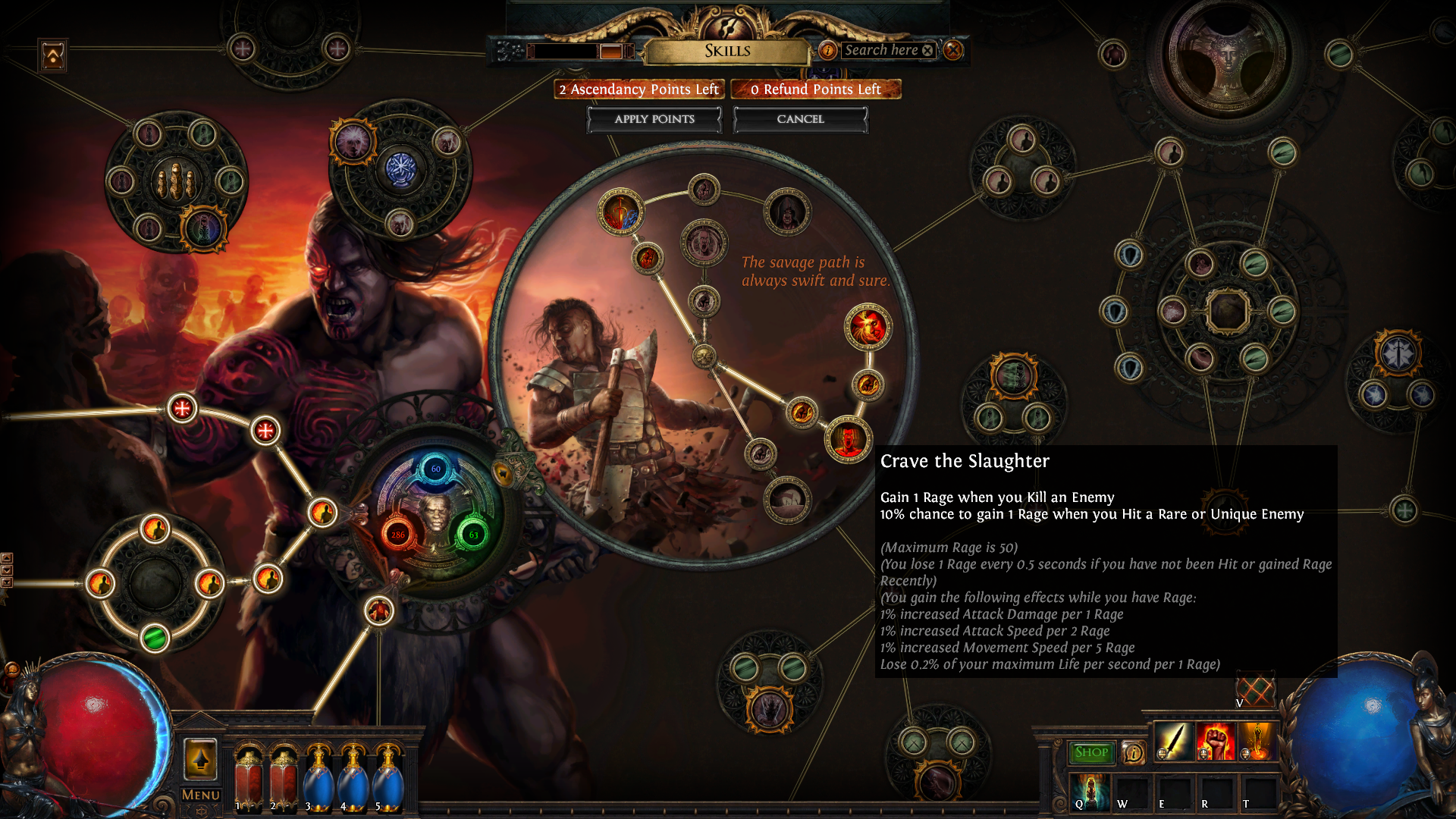 For example, Berserkers will be receiving rage. You gain rage when you kill an enemy, and you have a chance to gain rage when you hit a rare or unique enemy. Your rage caps at 100, and you lose 1 rage every 0.5 seconds if you have not been hit or gained rage recently. With rage, you’ll receive increased attack damage, increased attack speed, and increased movement speed, in addition to having to balance a loss of maximum life per second.

With these significant changes coming to Wraeclast, it will be exciting to see more classes become viable starting March 2nd.

All the above… and much more.

As per usual, the team at Grinding Gear has also been implementing performance improvements and other small changes for this content update.

With beast hunting, sacrificial rituals, shield throwing, and combined Elder/Shaper battles just around the corner, it’s easy to see why Bestiary is one of the biggest Path of Exile content updates yet. For more information, visit Path of Exile’s official page here. Once the league arrives on March 2nd, don’t forget to stop by the Path of Exile Wiki for all your Wraeclast questions!