Path of Exile players will soon have the opportunity to descend into the deepest, darkest parts of Wraeclast come August 31. As part of the upcoming Delve expansion, those who can effectively wield the power of the light will reap the biggest rewards, while those who fail to do so will be consumed by darkness. We recently chatted with Grinding Gear Games managing director, Chris Wilson, to learn more about this upcoming league. 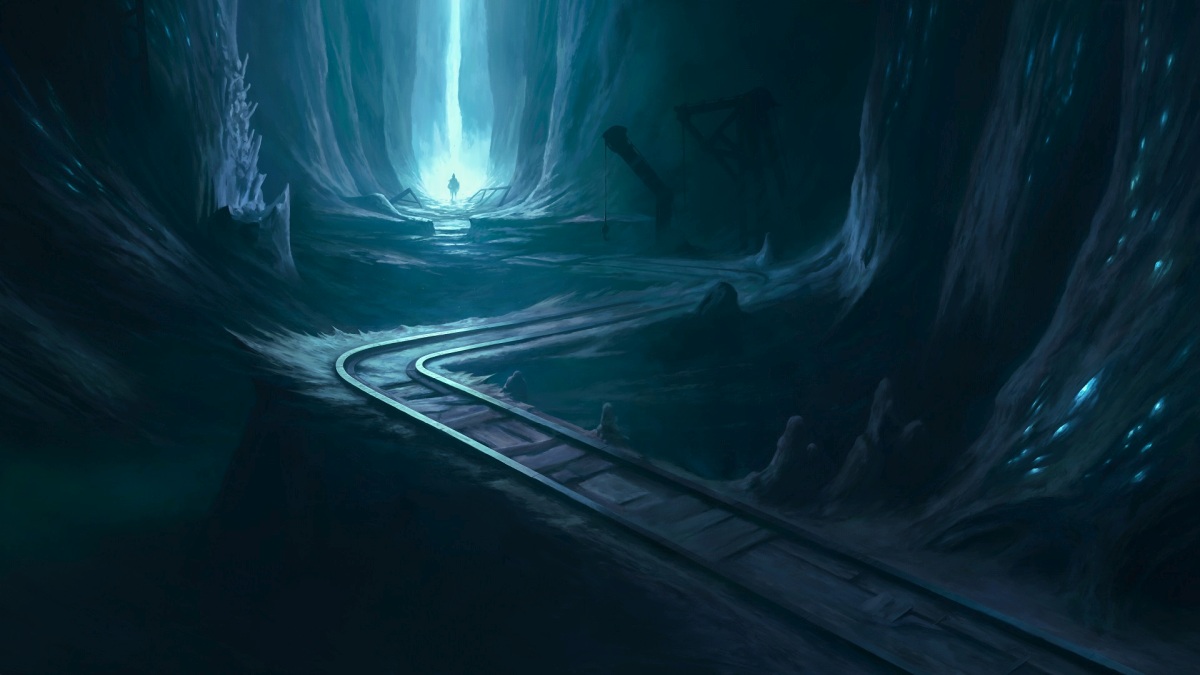 Upon diving into Path of Exile post-Delve launch, players will encounter something new throughout the game world — Voltaxic Sulphite deposits. Click on the mineral deposit, and a quirky inventor by the name of Niko the Mad will show up to mine it for you. This is the resource you’ll need to explore the game’s new content, and it can be accessed within the first 10 minutes of the game. Players can hoard their Sulphite to save up for longer delves into the underground, or use it immediately to start a new adventure into the mines.

"It's up to the player to choose when they want to engage with this new content...there's no need to go and play 100 hours to see the new stuff," Wilson says.

Players will be able to chart their journey into the depths using The Subterranean Chart, a map of your own personal, infinitely deep and infinitely wide mine that reveals areas around to your current location, allowing you to go left, right, or further into the depths. The further you go down, the more difficult the challenges become. The chart also reveals what kind of challenges, and rewards, you can expect on any given floor of the mine, helping you decide where to burrow to next. 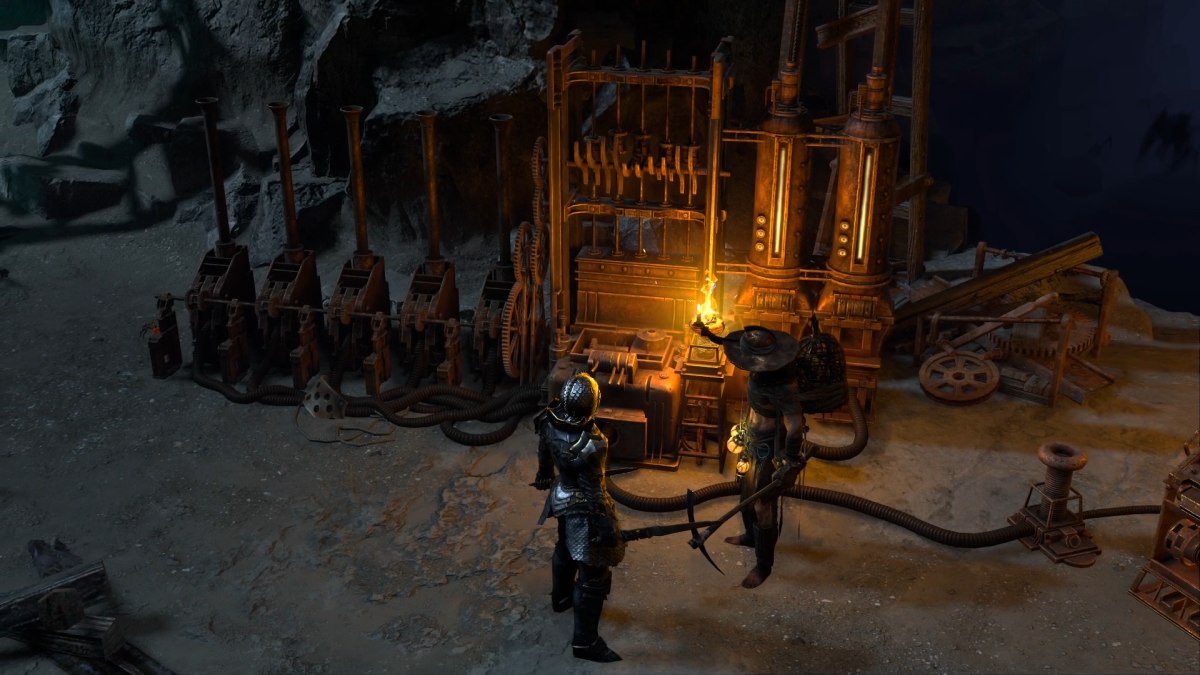 Light Is A Resource

It may come as a surprise, but mines are dark. And an ancient and infinitely deep mine in the world of Wraeclast? Even more so. That’s because this isn’t your typical darkness. In the ancient Azurite mine (no, not that kind of Azerite) players will be exploring as part of Path of Exile: Delve, darkness can kill in moments.

Thankfully, Niko the Mad has created some powerful light-based technology to help exiles journey deep into the heart of the darkness and reap the rewards within. The primary way to keep the darkness at bay will be by sticking close to the Crawler, a mine cart-like vehicle that emits an aura of light around it and uses Voltaxic Sulphite as a resource. While you’ll still have to fend off all kinds of dangerous enemies while journeying into the mines, standing near the Crawler will ensure that the magical darkness itself doesn’t take your life. If you’re lagging behind, the Crawler will slow down so that you can catch up. If you are attempting to clear the floor of the mine as fast as possible and rush ahead, the Crawler will keep up with your breakneck pace. Reach the end of the floor and you’ll have to overcome waves of enemies and bosses. If you emerge victorious, you’ll be rewarded with plenty of loot, and the path the Crawler took will become illuminated with light. In a nice touch, the Crawler will also automatically pick up items from slain monsters near the vehicle, dropping them at the end of each delve for your convenience.

Everything mentioned above sounds fun, but what’s life without a little extra risk? In each floor of the mine, players will glimpse chests and loot just out of the Crawler’s safe zone. While the darkness is deadly, it doesn’t kill instantly. Players will have a limited amount of time to leave the Crawler’s light and attempt to reach loot hiding in the shadows, then sprint back to safety. This is where flares come in. These deployable items will create a small, brief period of illumination wherever they are dropped, allowing players to journey off the Crawler’s path and into the darkness for even better rewards. Dynamite can be used to destroy unstable walls and create new pathways as well.

"While it's completely possible to play and enjoy this league never going in the darkness and just staying near the mine cart, maybe 80 percent of the rewarding stuff is hidden away in little alcoves that you have to take risks to get to," Wilson says.

Of course, it wouldn’t be Path of Exile without upgrades to pursue. In Delve, players will acquire Azurite while journeying in the mine. This valuable resource can be used to upgrade the Crawler (and flares and dynamite) in a number of ways. Want to be able to store more Sulphite? Increase your resistance to the darkness? Expand the radius of the Crawler’s light aura? It’s all possible with enough Azurite, so choose your upgrades wisely. 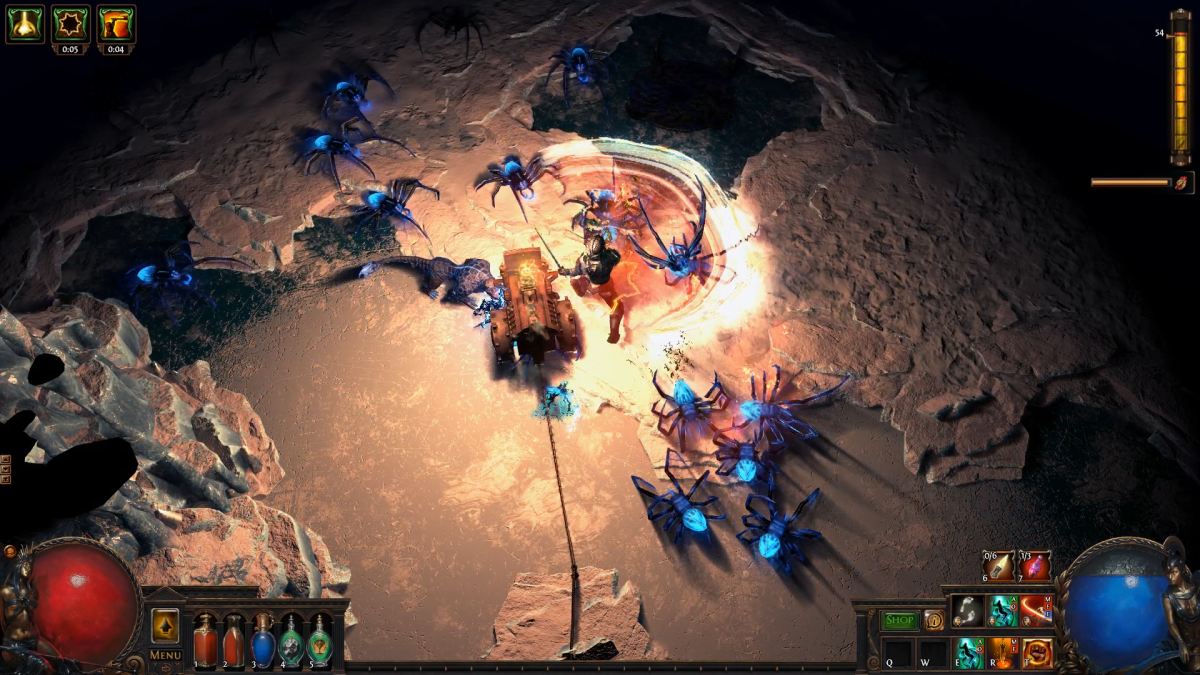 Path of Exile is known for how it handles loot, namely in that modifiers are almost entirely random. Don’t worry, that’s not going away anytime soon. It’s part of what makes Path of Exile great. That being said, Delve will be introducing a new way to direct the randomness which will give players a little more control when attempting to craft the perfect item.

Players can find and use fossils and resonators to upgrade an item to have specific types of traits. For example, you might really want a weapon with lightning modifiers. By socketing a Metallic Fossil into an Alchemical Resonator, players can increase the chance of an upgraded item possessing more lightning-based modifiers, while also eliminating the chance of physical modifiers. These fossils even open up completely new lightning modifiers that weren't previously possible in the upgrade process. Players can find resonators possess multiple socket-slots as well, which means you can further direct what kind of item you’ll end up with post-upgrade with multiple fossils. It creates some tantalizing possibilities, and should make attempting to perfect a build with just the right item a little easier. 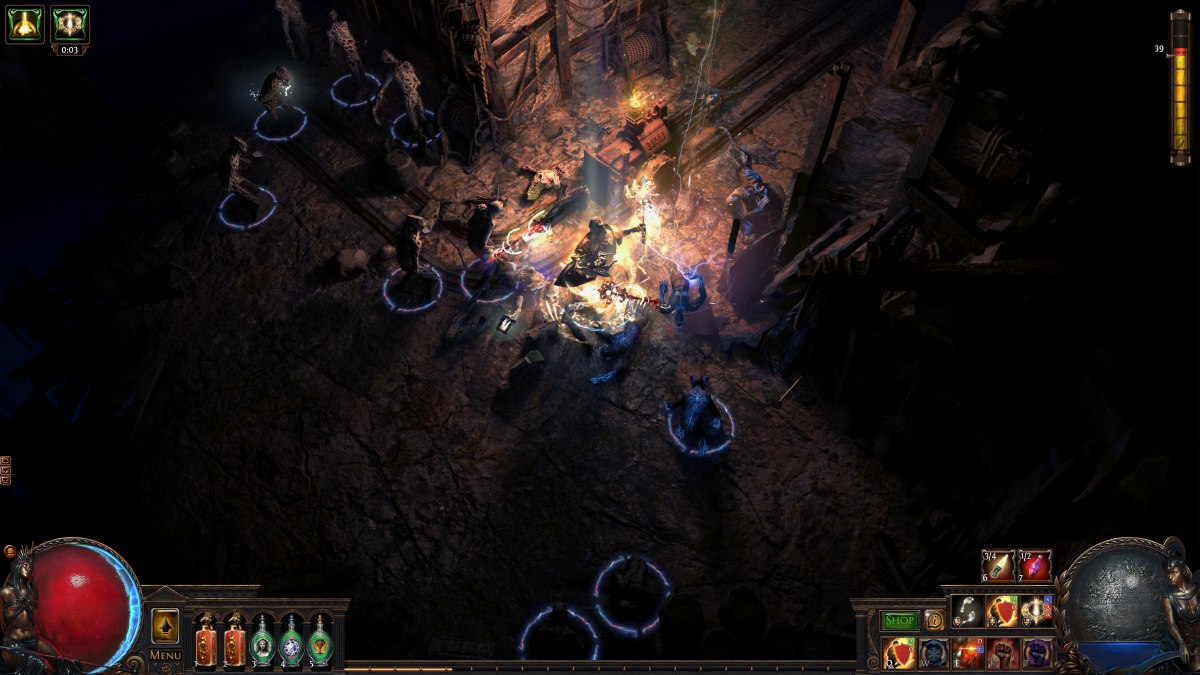 In every expansion, Path of Exile introduces new (or reworked) skills to create even more build possibilities. In Delve, there will be a total of 10 new or heavily reworked skills.

One of those new skills is Smite, a skill for the Templar subclass, Guardian. The ability causes a bolt of lightning to crash down on a targeted enemy, as well as on another nearby enemy. Not only that, but using Smite will also empower teammates with additional lightning damage and a chance to shock enemies with attacks.

Another new skill is Toxic Rain, a bow skill for Chaos Pathfinder builds. This impressive looking skill causes acidic arrows to rain from the sky, creating poisonous spores upon hitting the ground which slow down enemies and explode after a short duration, dealing damage. 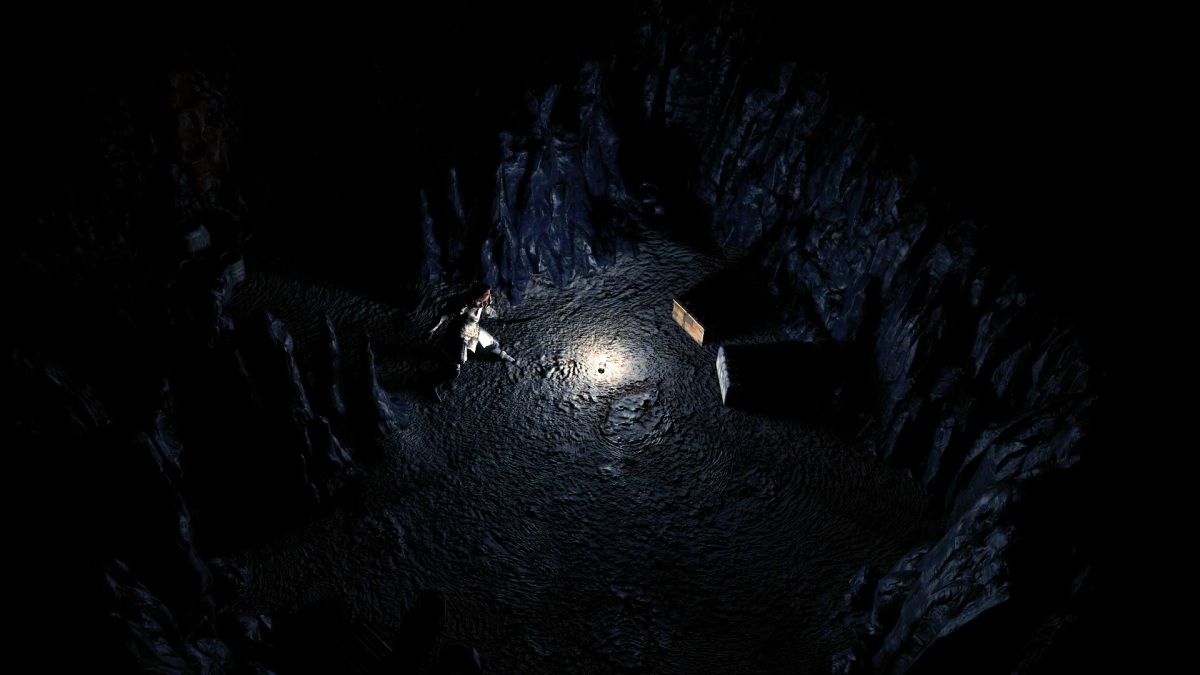 Step Into The Light

Great lighting is one of the key ways to make a game visually look great, and since Path of Exile: Delve is all about using light, it only makes sense that Grinding Gear Games looked for ways to improve the game’s lighting systems in the form of adding support for Global Illumination as well as Ambient Occlusion. Path of Exile: Delve also introduces the use of shadowed point lights, which makes the new mine-based content look particularly nice.

There are a couple of other nice graphical improvements too, like improved water tech and the introduction of new monster models to replace old models from early areas in the game. TL;DR: Path of Exile: Delve will make the game look better than it ever has before. 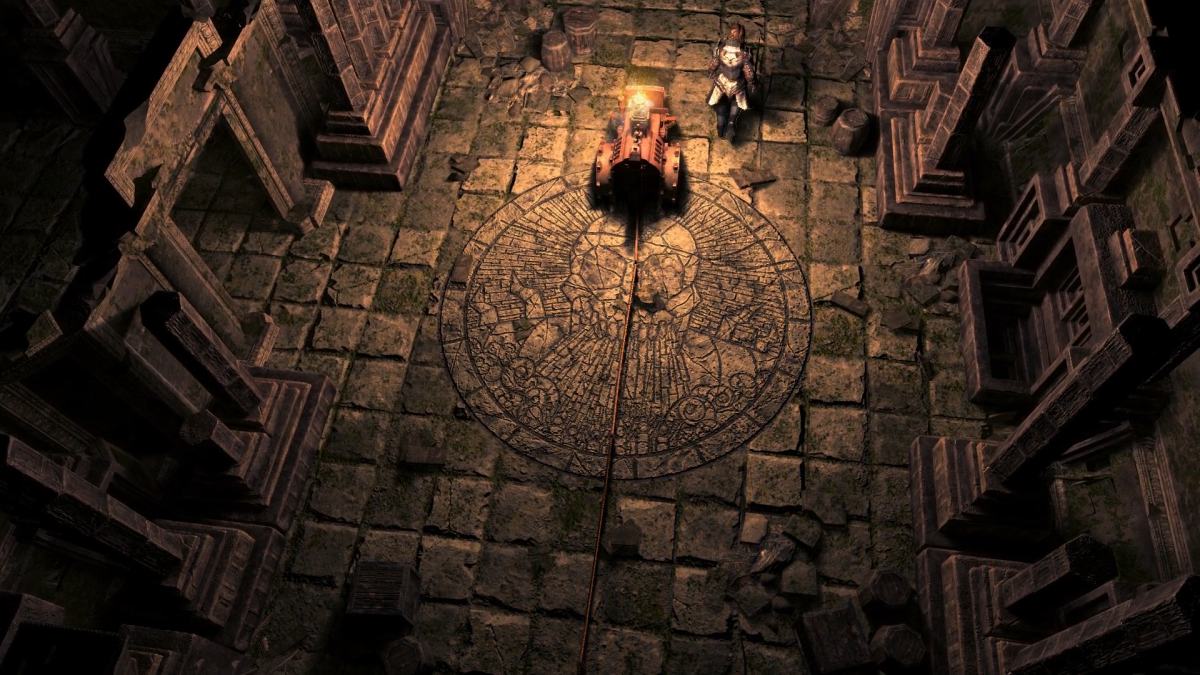 You thought we were done!? There’s plenty more being added with the Delve update, including 18 new unique items, incredibly rare Timeworn Reliquary Keys (which open a portal to a special chest containing items from past leagues that are otherwise no longer available), Delve leaderboards so players can compete to see who can descend furthest into the mines, and more.

Path of Exile: Delve releases on August 31 for PC, with the update arriving for Xbox One players on September 3. As always, be sure to consult the Official Path of Exile Wiki for the answers to all your burning questions.