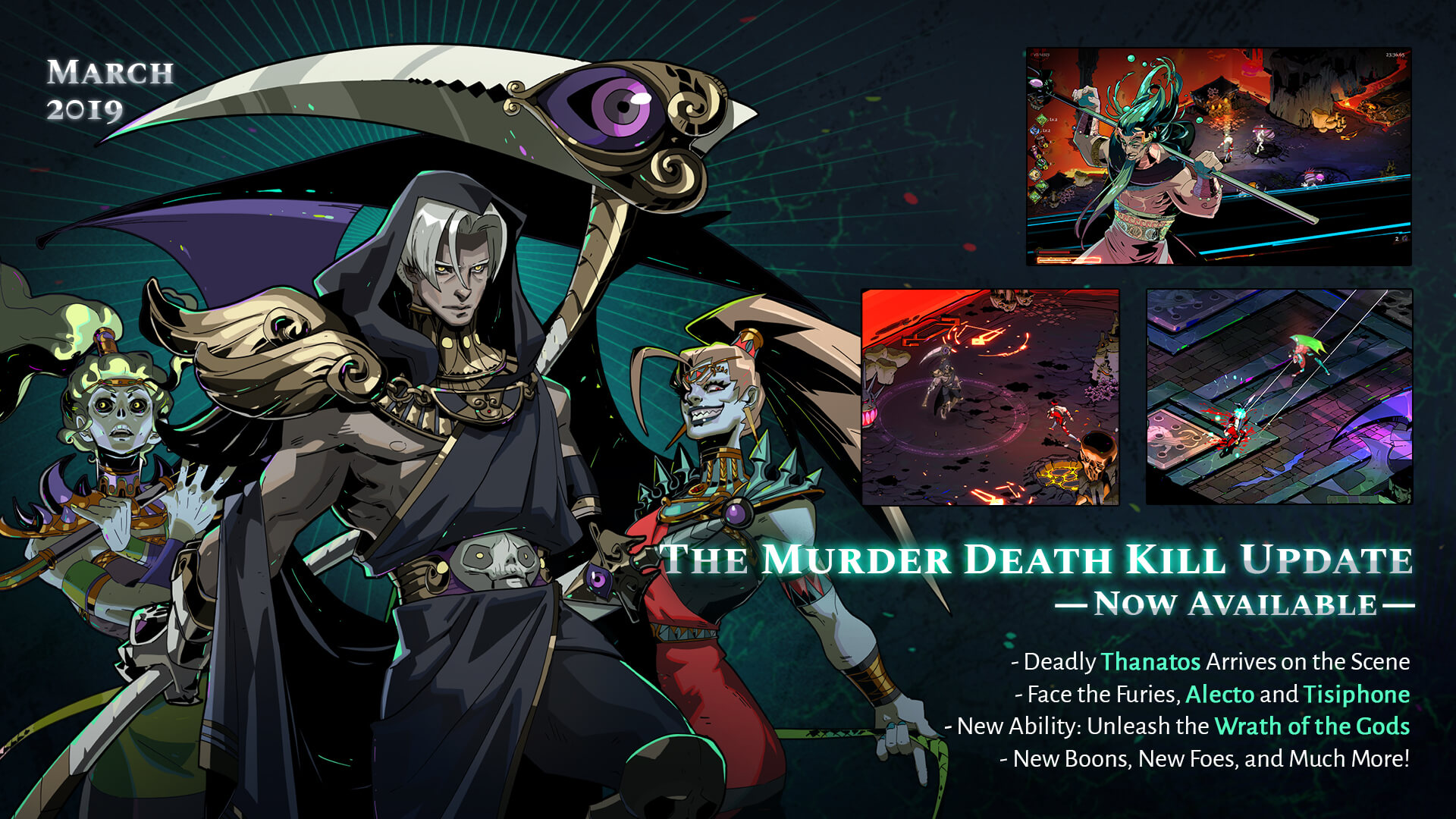 Hades has received the Murder Death Kill update, which is the third major update to the game--and easily wins the award for the best update name. This update adds a new power, character, enemies, bosses, and tons of balance changes to existing content in the game.

Thanatos, the aspect of death, has been added as a new character to interact with! Unlocking Thanatos will require you to come across his random encounter while progressing through the game. This encounter will have you fighting along side him and competing to see who can gain the most kills. Thanatos will also provide you with the Pierced Butterfly keepsake if you give him an ambrosia gift! 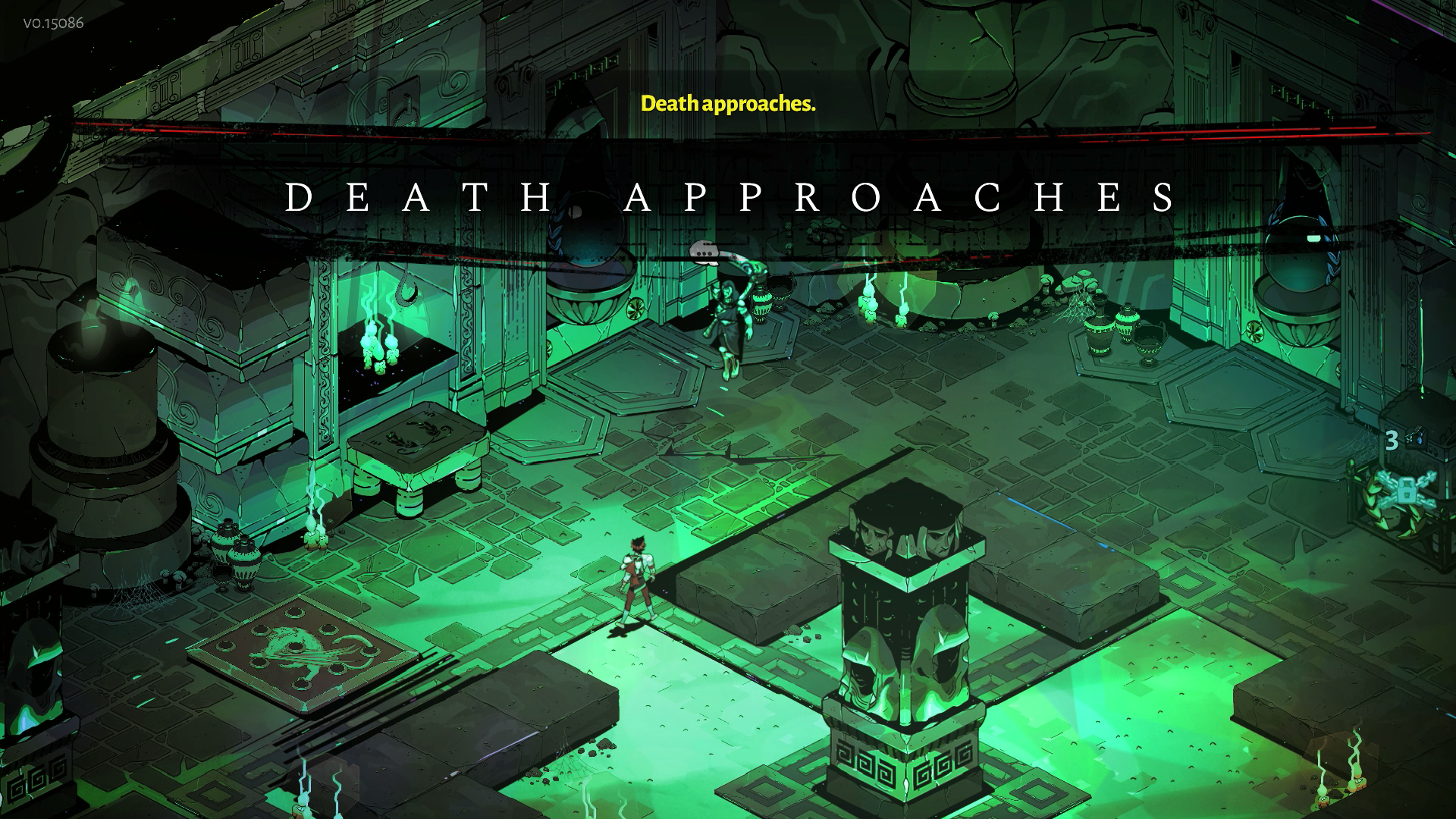 Hades has a rather extensive list of unique abilities and attacks for you to choose from in the game between five weapons and countless boons from gods; however, Supergiant obviously didn't think it was enough. In this update, they added the new Wrath of Olympus ability. This Wrath ability is randomly granted by one of the gods and will add a new power bar on yours screen that you can fill up by attacking enemies or by getting hit. There are 7 Wrath Boons available at this time, and each one will require a different percentage of your Wrath bar to be filled before you can use them. These Wrath abilities are extremely powerful, but the Wrath you generate will reset when you enter a new encounter. 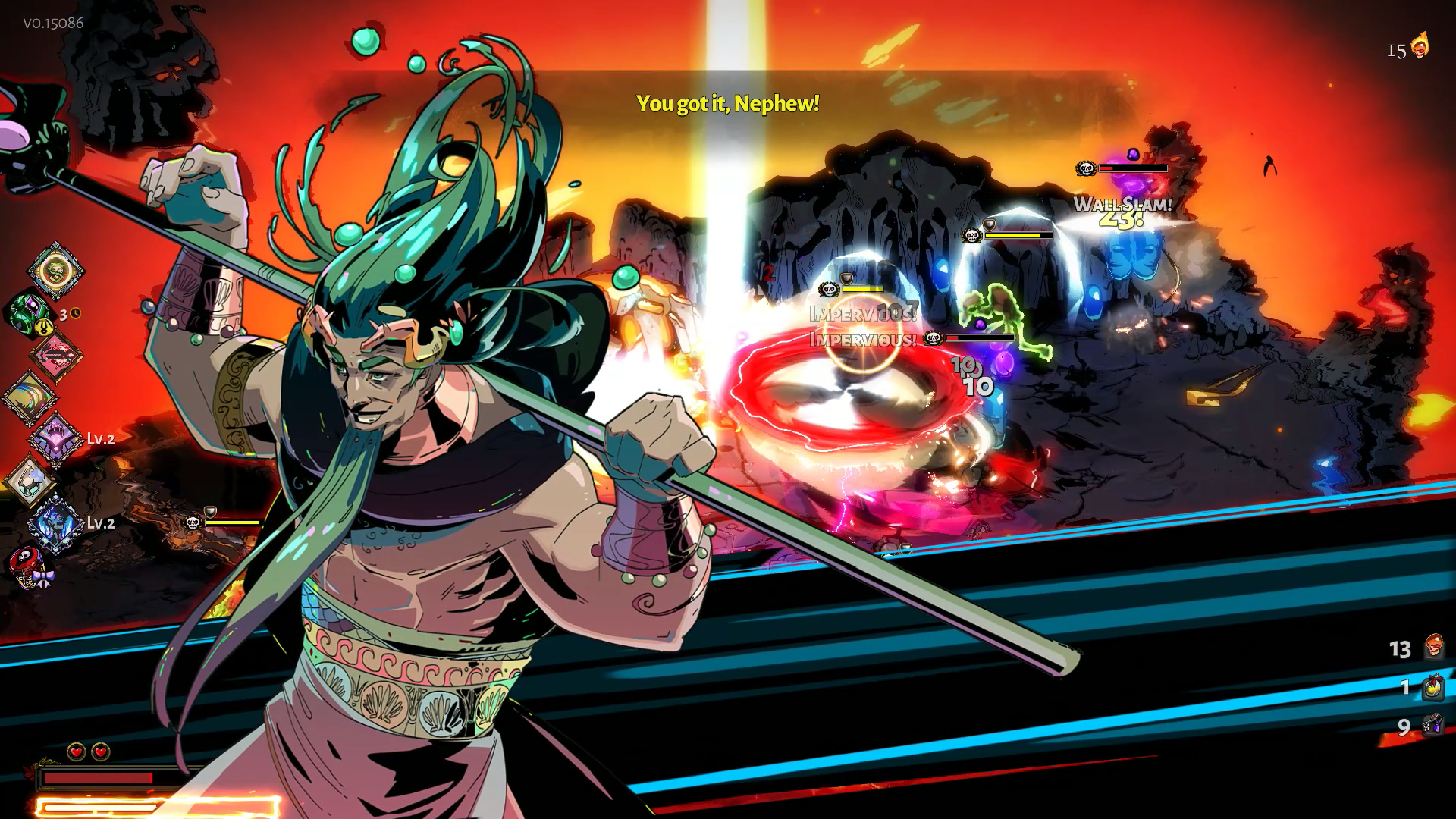 Two new foes have been added in this update and are different takes on the Bloodless enemy type. First, you have the Bloodless Wave-Maker, which unsurprisingly will try to stay at ranged and throw large purple energy waves at you. The Bloodless Burn-Flinger is the second new foe that, as you could have guessed, flings burning stuff... While the names aren't original, they are certainly descriptive and provide a nice variety on the existing enemy types in the game. 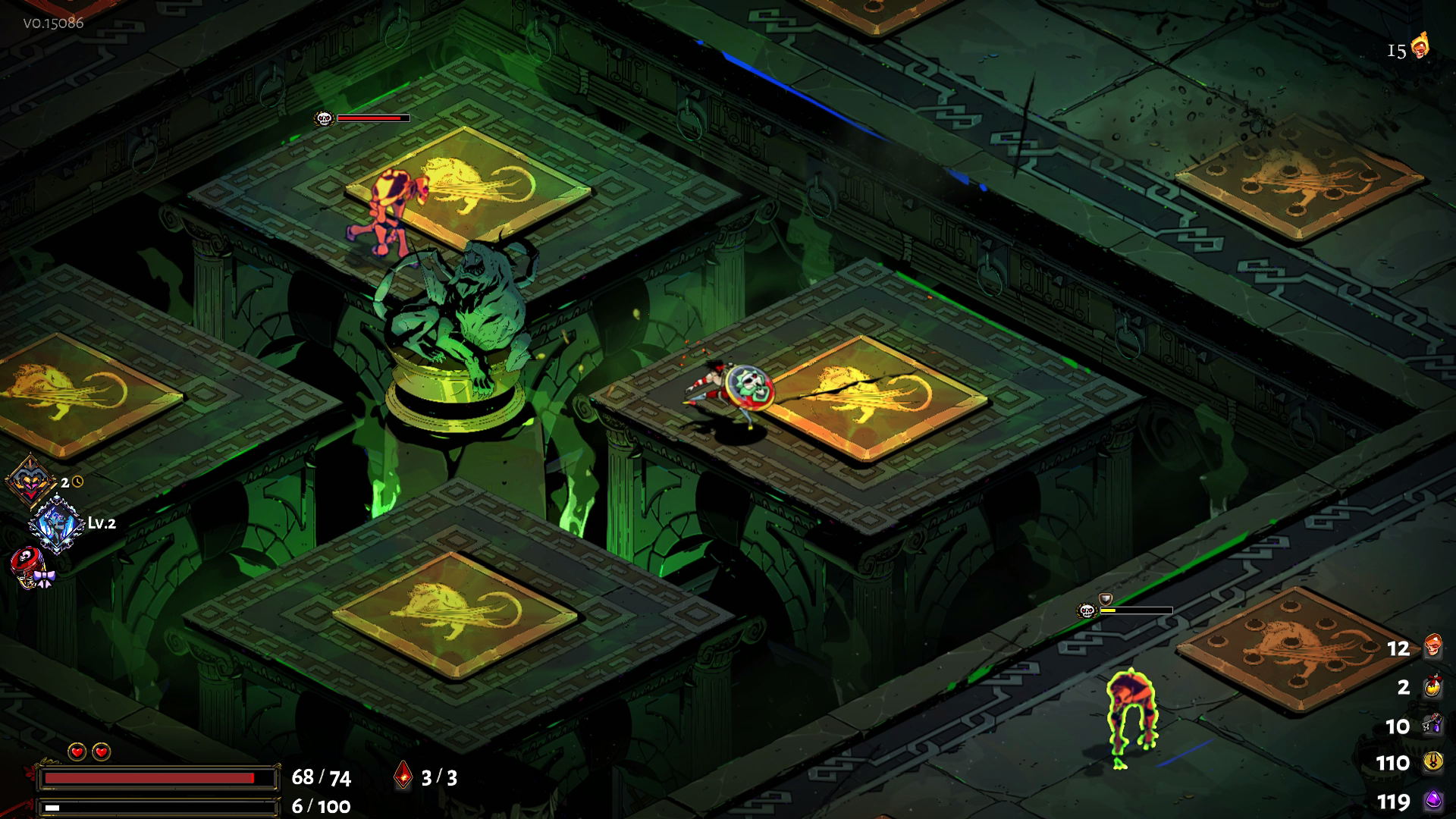 Alecto & Tisiphone, the fury sisters to the already implemented Megaera, have been added as two new bosses. From my time testing in the new update I can confirm that they will swap out with the normal Megaera fight. Both Alecto and Tisiphone have their own set of abilities and provide two new unique encounters to the game for existing players who have become used to the boss fight with Meg! 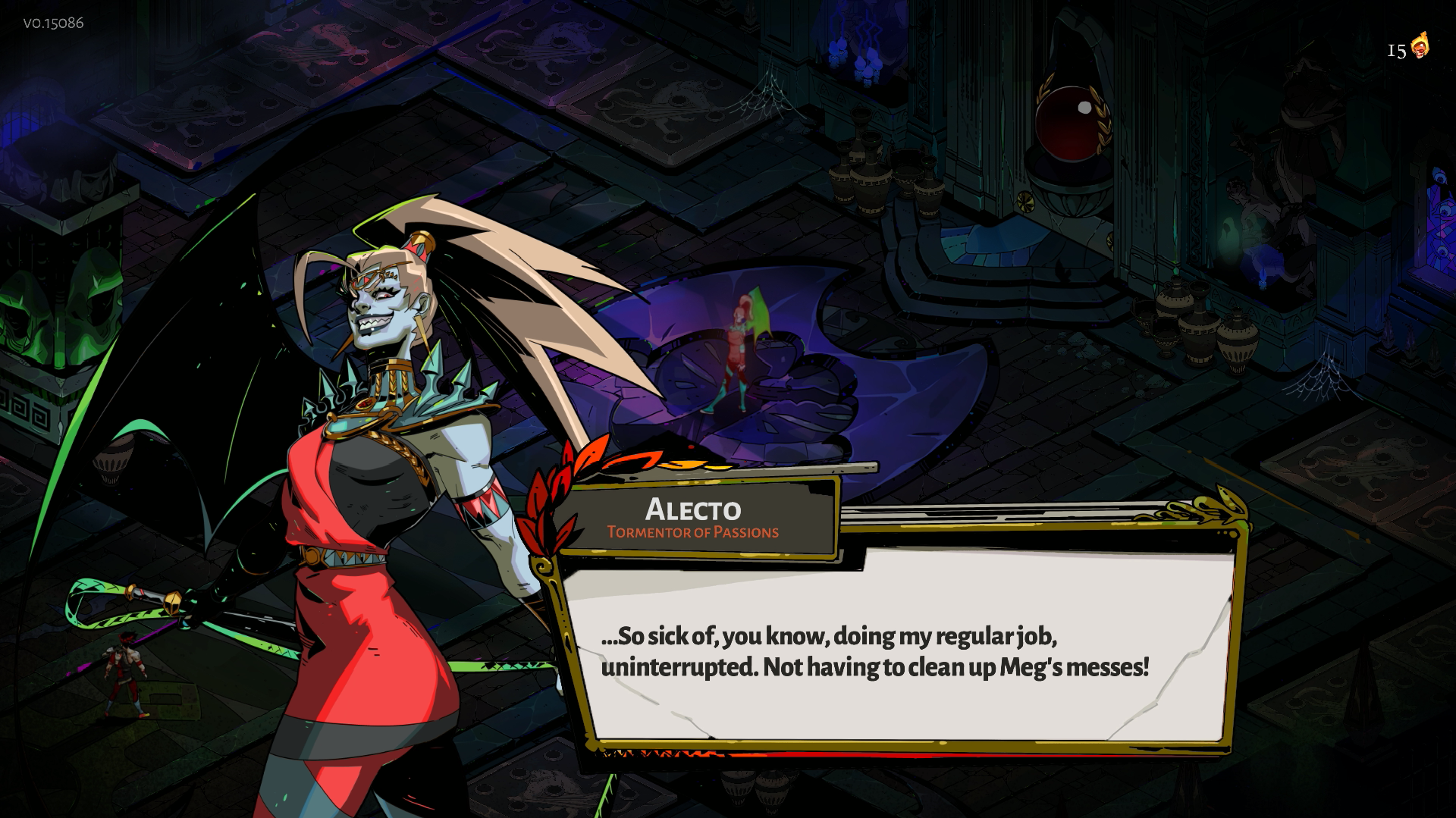 Overall, the Murder Death Kill update adds plenty of new content for both existing and new players alike. With that said, Supergiant has revealed that their next content update will include a new zone following the Hydra; however, it will not be out for roughly 60 more days. This breaks their current 30 day patch cycle, but allows for the team to focus on making a much larger patch than we have seen before. For more information on Hades, be sure to visit our Wiki here!