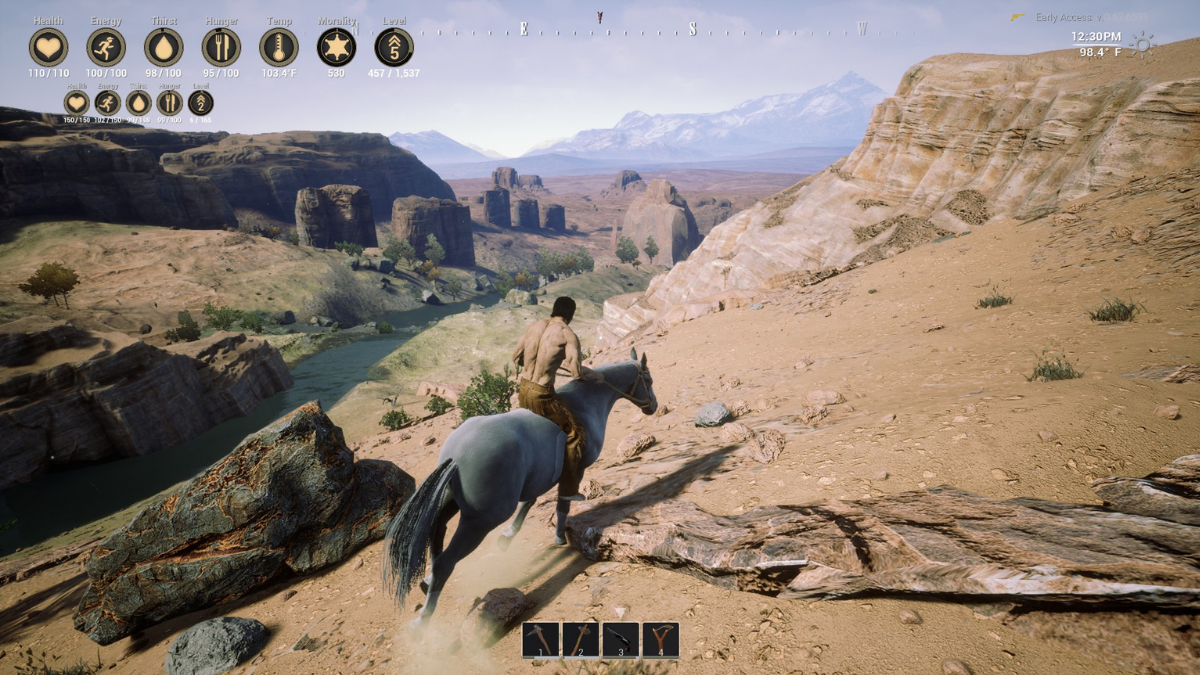 Aching to head back into the days of the Wild West? Feel like bein' a cowboy or cowgirl is in your bones? Looks like you're gonna want to ride on into Outlaws of the Old West, a PC-based massively multiplayer survival MMO that's teeming with items to collect, bandits to defeat, and allies to round up. Shoot, partner, it's even got a way for you to build your own homestead!

Outlaws of the Old West finds you taking on the role of a humble outlaw yourself, who's tasked with making a name for themselves as they traverse the high desert.

You'll need to survive the unforgiving wild as you deal with multiple different biomes and terrain that comes with the territory of your migrant lifestyle. The massive play area (144km^2, to be precise) is large enough that you could potentially get lost, so make sure you know where you are when the sun sets so you've got some kind of shelter from the cold weather!

But to build a shelter or accomplish anything at all, you'll need tools – and weapons. Create your own house, craft, farm for materials, and collect the weapons you need to defend yourself against an incoming intruders. From explosives to shotguns and slingshots, there's something for any situation.

Of course, you'll need weapons to attack enemies, but there are also animals to hunt so you can use their meat as sustenance and other parts as supplies. You've got to stay well-fed and dressed, after all, so better get used to hunting and fishing early on. And let's not forget all the harvesting you'll eventually have to get in, too.

Outlaws of the Old West has a little something for everyone – especially the Red Dead Online crowds looking for something a little meatier. Think survival meets your favorite western and then you'll have an idea of what's going on here. Git along, little dogie!

Ready to head out West? Get a gander of what you'll be gallopin' into here:

If you're ready to mosey on into town, you can do so right now. The game is available on Steam right now as part of the Early Access program. Rustle up some friends, cowpoke, and become the best outlaw you can be. Then, be sure to check out our Official Outlaws of the Old West Wiki if you have any questions or any burning needs to see how things work.