Julian Gollop is somewhat of a legend in the business. His most popular contribution to games is X-COM: UFO Defense, one of the most influential tactical RPGs of all time. Firaxis Games revived the old franchise with XCOM: Enemy Unknown in 2008, but we've seen nothing from this lineage of games since XCOM 2 in 2016. That isn't to say that their haven't been "XCOM-like" games since - there's almost too many of those to count. But when Gollop opens a studio to throw his hat back into the ring that he made famous, it's hard to to get excited about the prospect of a new game in the subgenre. Considering all we've seen of Phoenix Point thus far, we have a lot to be excited about.

The Phoenix Project was an initiative put together after World War II in order to prepare the world for threats that where bigger than national borders or petty human squabbling. They thought themselves to be bigger than any individual country allegiance, and more righteous than any one set of national interests. For a bit, they navigated global conflicts well, operating vast recon and R&D operations in secret. After a failed space mission to the moon, the Project was dissolved. Just in time for a mist carrying the Pandora virus to sweep across the planet, killing and drastically mutating humans, animals, and flora. These mutants effectively ended the world as we know it, and the survivors live in hopes to reshape the world in a new image. The Phoenix Project is no different, rising from the ashes of the old world in hopes to protect what's left from another Pandoran apocalypse.

The fight against the alien menace happens on small, tactical maps that are dense with destructible obstacles and multilayered stages. Battle goes down in a fashion that should be very familiar to fans of this genre. Individual units have action points that they can spend moving and attacking the enemy with a range of weapon types. Special abilities and tech can also be employed to gain an upper hand on the bad guys. Phoenix Point tries to change up some of the routine here by playing with some of the minutiae, like adding Will points which affect allies mental state when fighting enemies. Free Aim mode allows attackers to target individual limbs of an enemy. This is important because the enemies themselves come in a variety of permutations that can allow the to have unique features that can demand unique attention. Three different enemies, all with the same base mode, can have three completely different sets of mutations that give them all individual strengths and weaknesses that may need to be addressed more directly than just firing at the body.

XCOM players will recognize the Geoscape at first glance. Outside of the combat, this is the world map that allows you to strategize on a global scale. Where XCOM's map was reactive at its core - you only really mobilized forces and made decisions based on aliens making a move - Phoenix Point is more proactive. Points of interests exist on the map for you to explore. Exploration takes time, but eventually an event will pop up that could grant resources or reveal a mission. From the Geoscape you can also build new bases and expand on locations you already have, expanding the Phoenix Project's influence in the face of Pandoran invasion. Diplomacy with one of the three different factions is also possible here, but be careful not to make the wrong kinds of enemies. 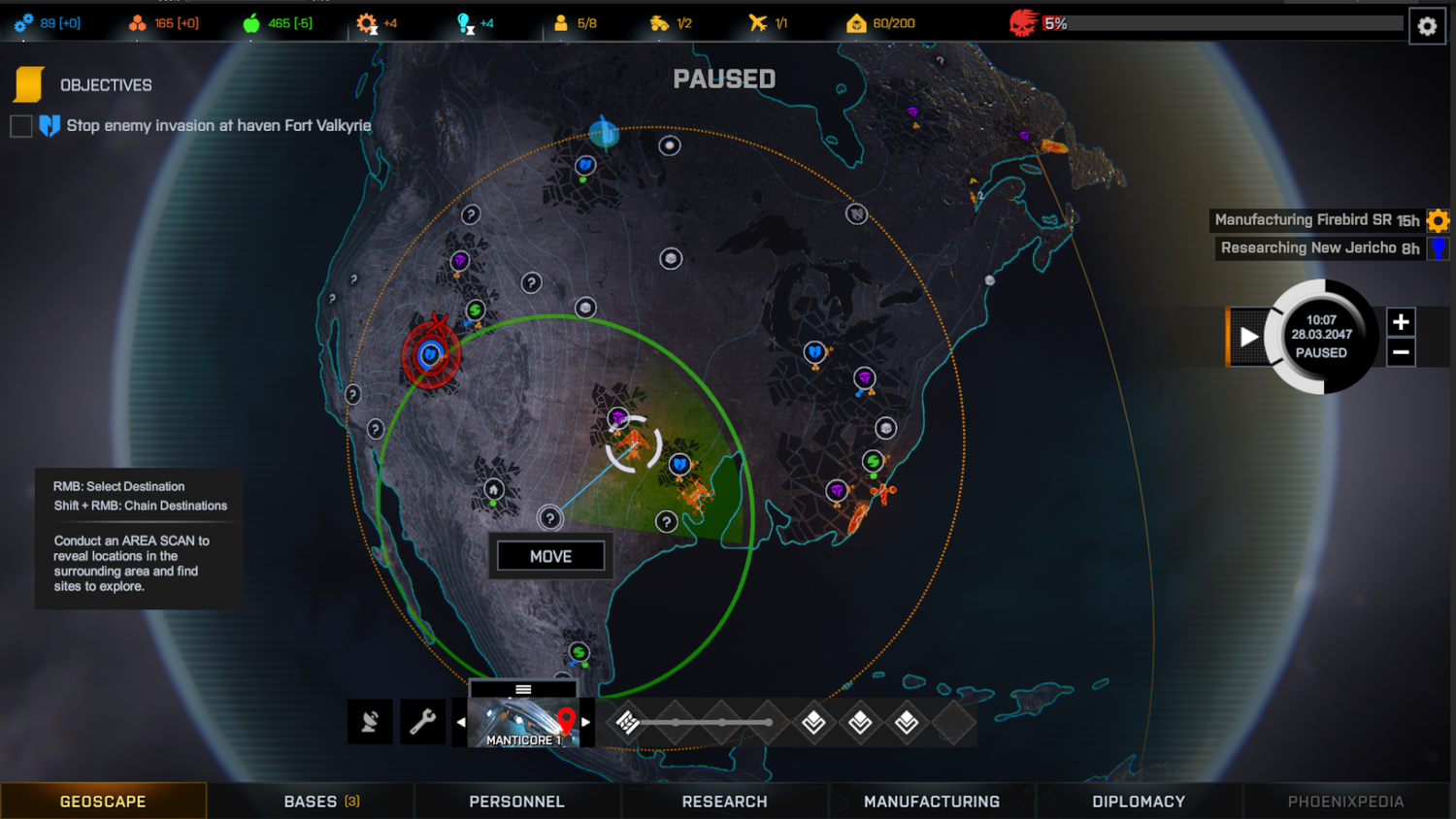 Your relationship with these three factions - New Jericho, The Disciples of Anu, and the Synedrion - determines how the main campaign's quests unfold, as well as the various endings you can get. Your reputation with these factions will also determine what sorts of units you'll be able to recruit from them. Each provide something unique to your fighting force. New Jericho specializes in big armor and heavy firepower, while the Disciples let the Pandora virus take their bodies to the extreme.