Last year’s Season of the Dragon was an interesting experience for Elder Scrolls Online players. It told a single, coherent story – a tale of apocalyptic dangers, corruption, politics, and a whole lot of cats – while exploring one of the most fascinating races of the setting, the Khajiit. Now that the story of Elsweyr and Khamira is complete, the next season will focus on Skyrim. This time, however, we will delve into the dark, Gothic secrets of its vampire clans. The dragons will sleep for another era.

Lyris is back. And someone's going to get a face full of ax.

The First Chapter is Here

Harrowstorm is the first installment of the year-long season, preceding the main course, Greymoor. Like Wrathstone, this is a dungeon DLC, introducing two new dungeons to explore, setting the stage for the chapter and introducing some of its principal characters. As with every release, each dungeon also contains new item sets to collect, trade, and curse the RNG for trash traits. 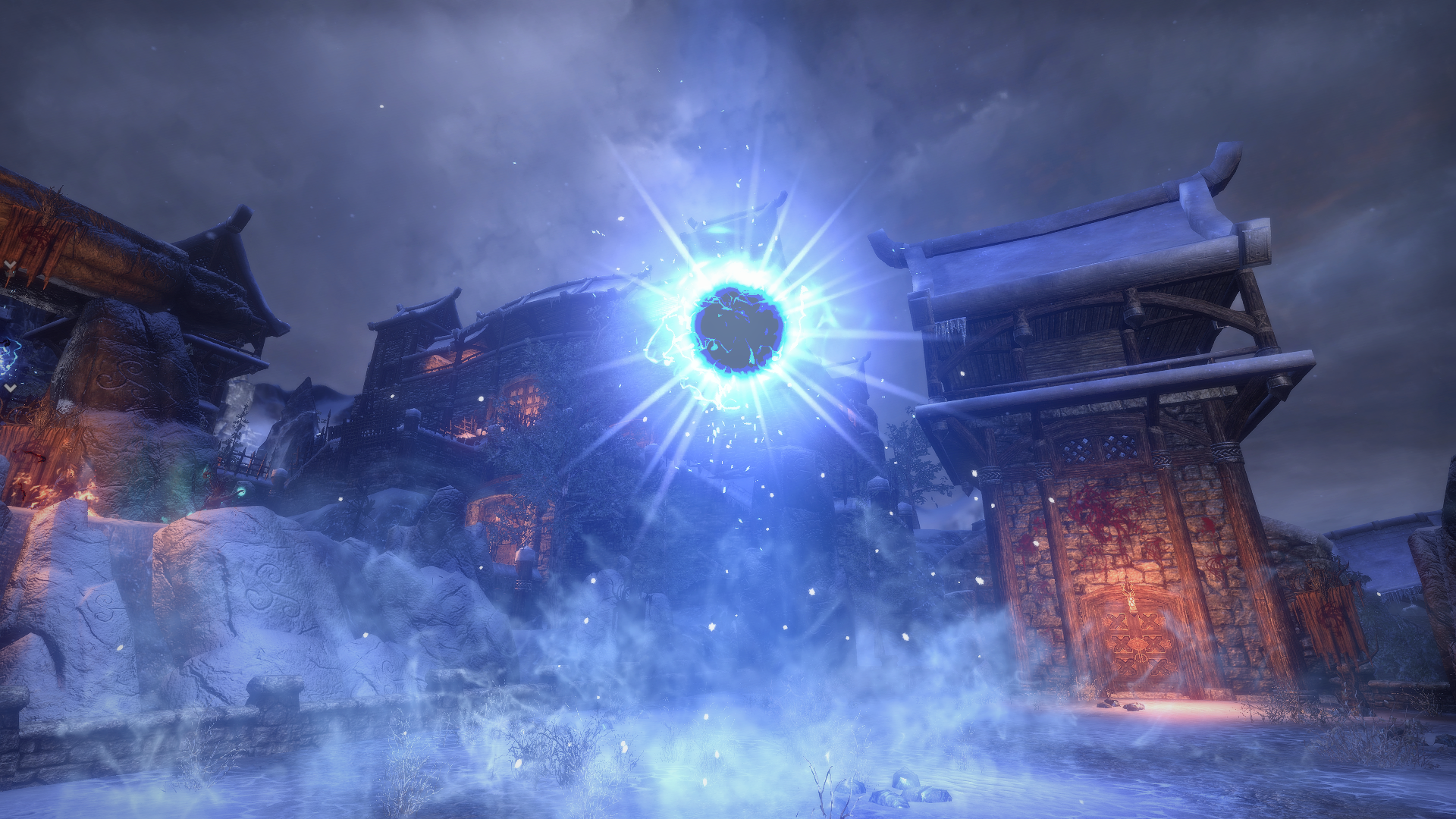 The season begins among frozen peaks, as you assist a Nord expeditionary force – what remains of them – against a witches’ coven that returned and seized the eponymous Icereach at the helm of a horde of Reachmen. It’s a fairly straightforward dungeon featuring the usual Nord scenery and assortment of bosses: A giant called Kjarg the Tuskscraper, the hagraven Skelga, a huge flesh atronach called Vearogh the Shambler, the Stormborn Revenant, and ultimately the coven itself, led by Mother Ciannait (featured on ESO’s blog).

The bosses themselves are unremarkable: Apart from witches that support them with spell barrages and occasional trash mobs, they have almost no unique mechanics. The confrontation with the coven at the end is more interesting, though not by much – you need to switch between the witches and eventually interrupt them before they manage a Total Party Kill with a glowing orb. 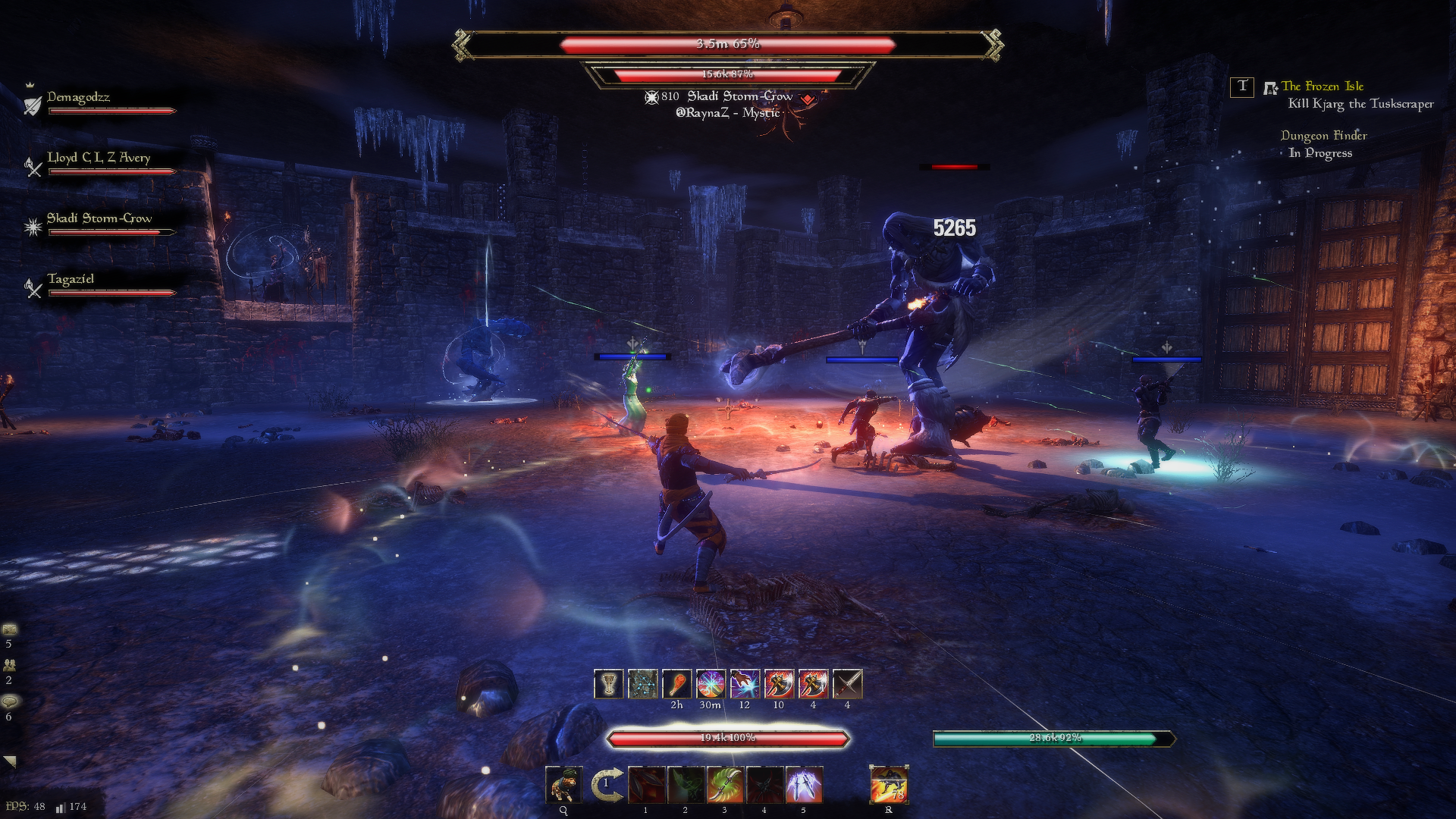 Bosses do not respond to dance-off challenges either.

However, it does introduce Lyris Titanborn, the last of Emperor Varen’s Companions, complete with her usual charm. If you never liked Companions, chances are she won’t change your mind. Either way, you’ll also earn new gear: 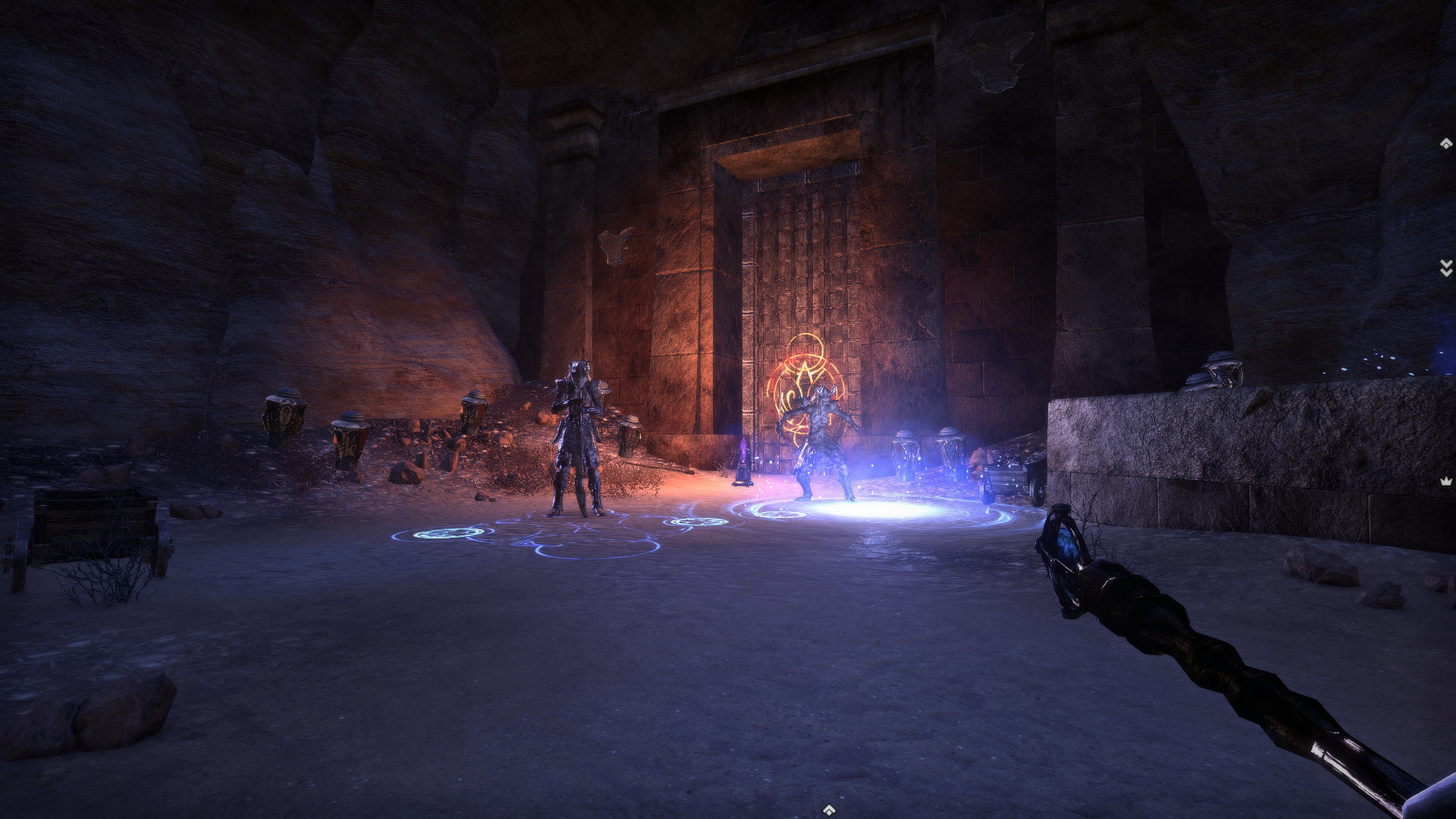 Grey Host is a potential army of the undead buried under Bangkorai. Someone decided to dig them up. This has made a lot of people very angry and been widely regarded as a bad move.

Unhallowed Grave: Undead and Sand in Places You Didn’t Know You Had

The other dungeon takes you in a completely different direction. Instead of frozen peaks and witches, you’ll head underground, beneath the sands of the Fallen Wastes in Bangkorai, to explore a crypt that contains the remains of an ancient, unholy army dating back to the First Era. Naturally, ancient warriors and free real estate attract grave robbers. As usual, ancient fraternities sworn to defending these resting places are defeated and it’s your job to mop up.

While the story is pretty standard fare as far as Elder Scrolls Online is concerned, Unhallowed Grave is much more interesting in terms of gameplay. Each boss features some unique mechanic: Hakgrym the Howler adds new enemies and has a nasty surprise waiting for you when he’s almost defeated, Keeper of the Kiln requires coordination and quick thinking to avoid a wipe-out (you need to make it perform a special move on a glowing sigil to avoid toxic gas; the AI doesn’t always cooperate), the Eternal Aegis is a floating mass of razor blades that requires precise footwork to defeat its defenses (and quickly taking out its lesser clones), while Ondagore the Mad is a lich that requires a lot of situational awareness and clever use of grappling hooks to survive. The final boss is straightforward by comparison, but has an ace up its sleeve – and a rather cool looking one to boot. 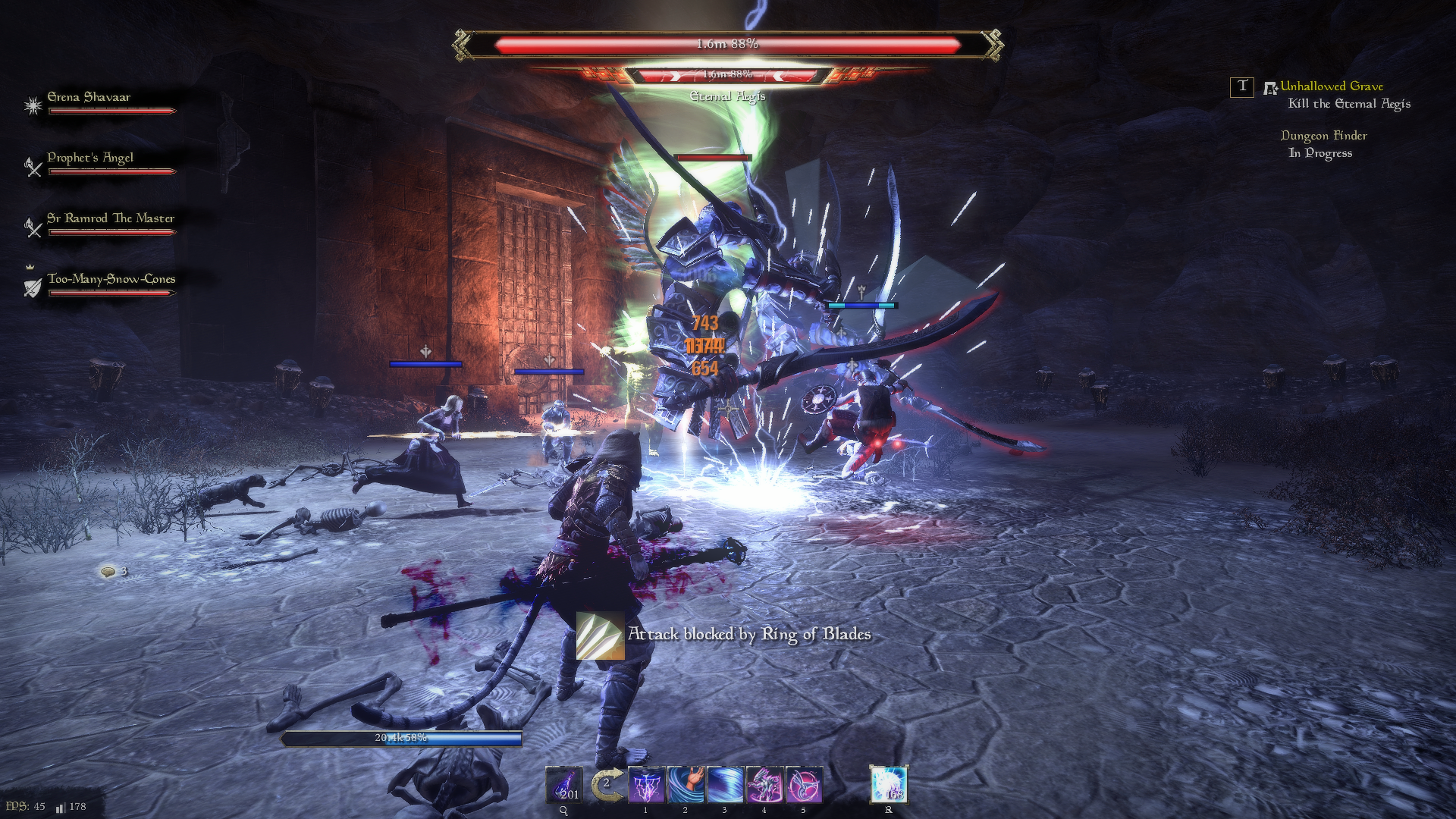 The aforementioned Aegis. Defeating it is more than just a matter of chipping away at its health for half an hour.

Like Icereach, it introduces new major characters. The most important is a Pyre Watch survivor, Shelaria (like Mum Ciannait above, important enough to be featured on the ESO homepage). She’s forced to ally with what the Redguard hate the most, a vampire, which makes for some delicious conflict and snark between the two. Like Icereach, you’ll also be able to walk out of Unhallowed Grave with new item sets: 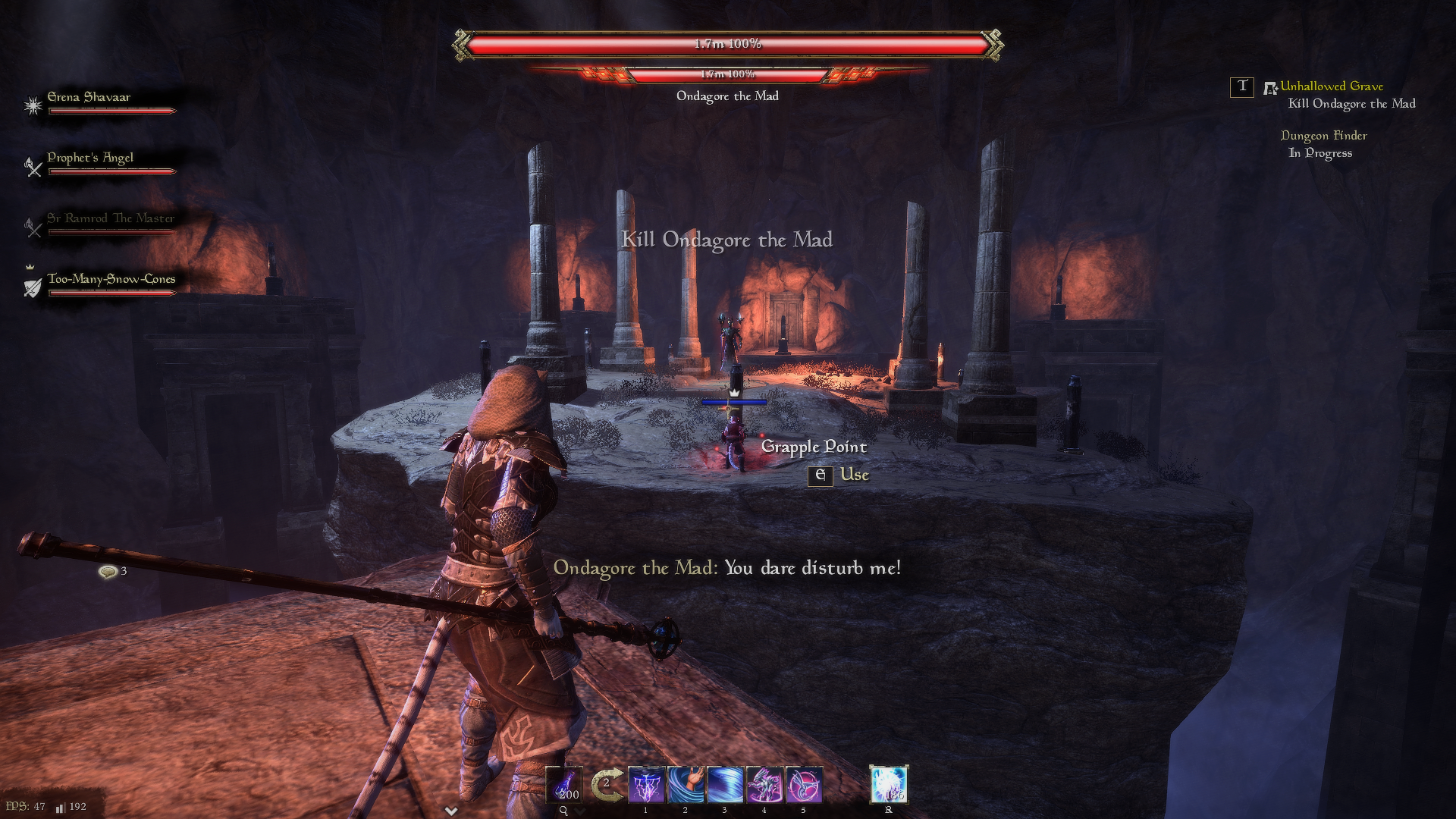 Two minutes later, Erena was dead - and since she was in the lich's LOS while he was casting his special attack, reviving resulted in another death within seconds. Fortunately, they had a bargain on cat lives last week.

A Decent Start to a Gothic Tale?

Harrowstorm shows that the third season intends to follow in the footsteps of the Year of the Dragon, focusing on supernatural, but non-Daedric threats. It’s a welcome change of tone after dealing with Daedric princes for what seems like an eternity (and certainly the main story line and the proto-season, the Daedric War spanning Morrowind, Clockwork City, and Summerset). Most importantly, it’s just plain fun to play through, whether it’s the straight-up fight at Icereach or the more puzzle-like experience of the Unhallowed Grave.