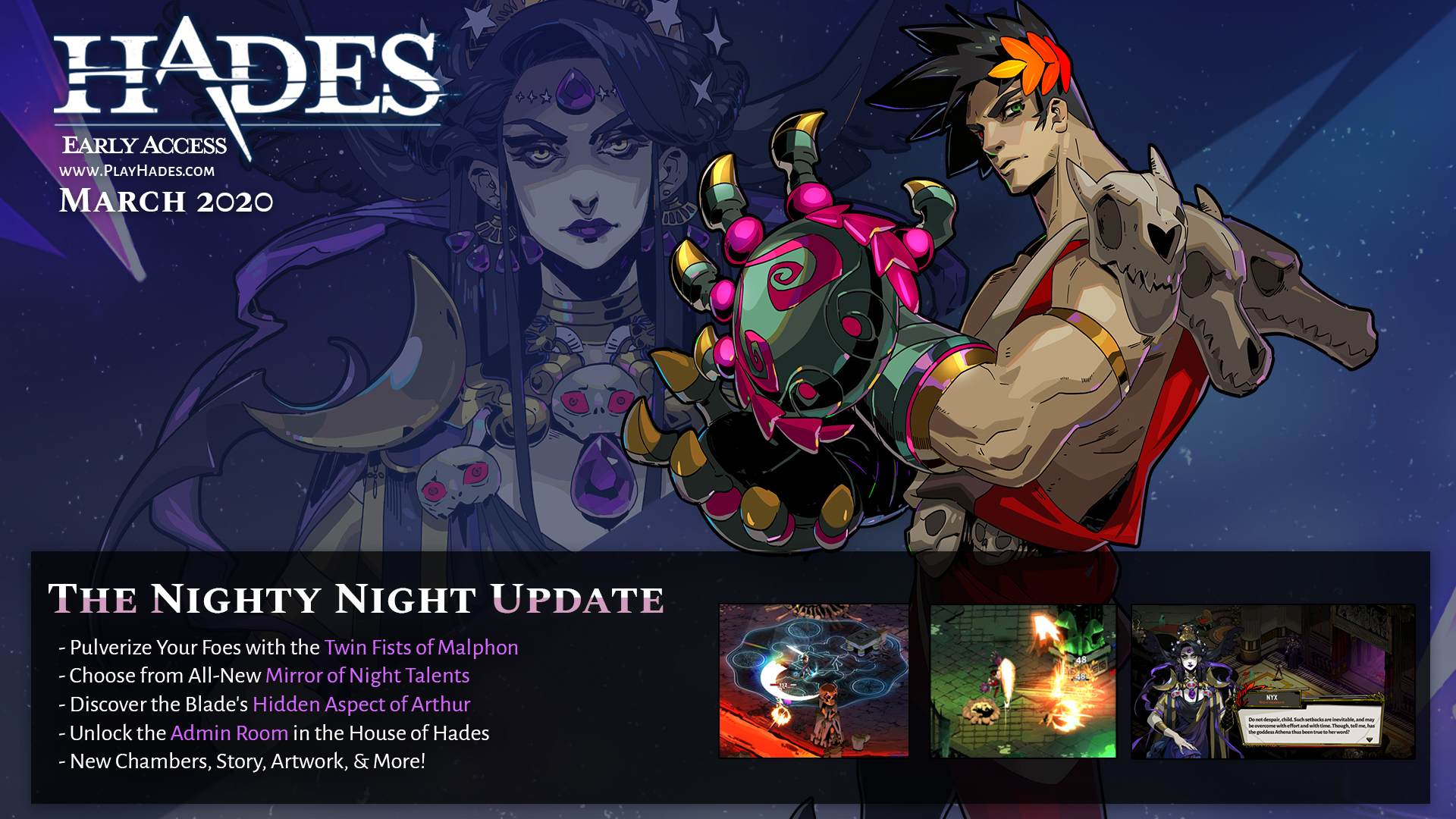 The Nighty Night update for Hades is now live, and any player who owns the game on either Steam or the Epic Games Store can jump right in and enjoy all the new content! This new update adds an entirely new weapon to the game which includes its own weapon Aspects available to customize your gameplay. The mirror of Night has been reworked to give players greater choice in their gameplay customization, and the story has been expanded to include new narrative featuring Nyx, Chaos, Artemis, Zeus, and more!

Malphon, the Twin Fists is an entirely new weapon that has been added to Hades. This set of fist weapons gives players the ability to punch the denizens of the Underworld harder than Hercules fighting with his bare hands. The primary attack with the Twin Fists is a set of quick jabs that does moderate amounts of damage but presents players with an opportunity to apply any debuffs they may have to targets extremely quickly. The special attack is a powerful uppercut that is perfect for dealing large amounts of burst damage to a target at the cost of locking yourself into a short animation that leaves players vulnerable to counter attacks. 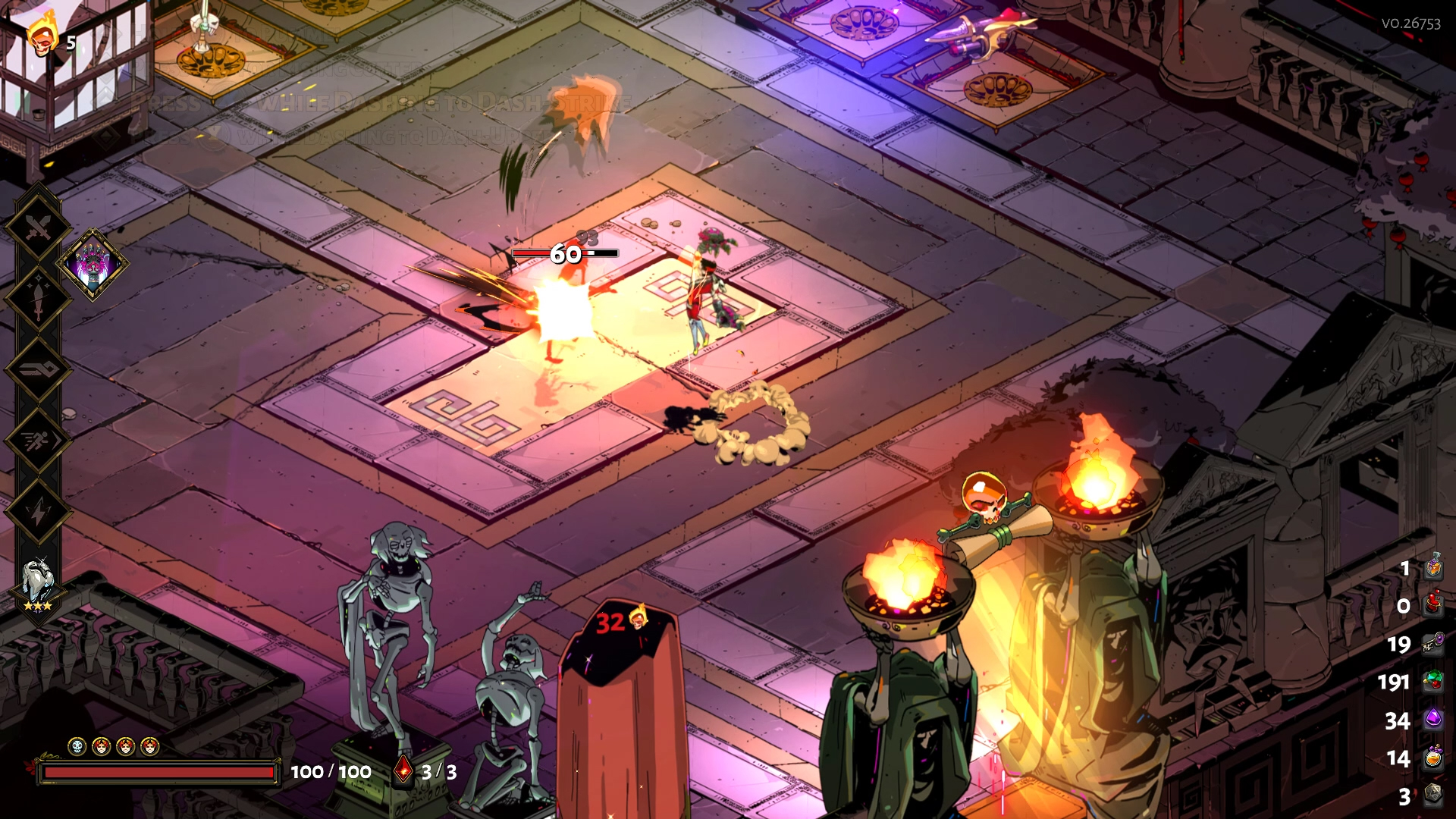 The Zagreus Aspect for the Twin Fists grants additional attack speed and dodge chance and the Talos Aspect allows players to drag foes to them with the Magnetic Cutter, which is a more powerful version of the uppercut special. After a foe has been dragged by this effect, they take additional damage from Attacks and Casts for a short time. Finally, the Demeter Aspect gives the Twin Fists the ability for the uppercut special to hit additional times after landing twelve strikes with the Attack.

The combination of these new aspects paired with the Twin Fists opens countless new ways to play the game. This is especially true when one considers that the Twin Fists has its own set of god Boons for each currently implemented god, and its own Daedalus Hammer upgrades that greatly change the function of each of its attacks. Malphon, the Twin Fists is the second-to-last weapon that new players will unlock, and the Adamant Rail now becomes the final weapon to unlock; although, players who have already unlocked the Adamant Rail will retain their access to it.

The Mirror of Night has been in the game since its launch into early access and has seen several balance passes and reworks along the way. The Nighty Night update adds the most significant rework to the Mirror of Night in the form of flip-side talents. All the previous talents remain, but players may now choose a coinciding flip-side talent which is similar in theme but much different in function. For example, the Shadow Presence talent that allows players to deal more backstab damage now has the Fiery Presence Flip-side talent which allows players to deal more damage against undamaged foes.

Only one talent per pair may be active at a time, and the ability to subtract ranks in each talent has been removed in favor of a full Darkness refund option for a minor cost. Talents are no longer all visible from the beginning of the game to reduce the overwhelming nature of the system to new players and are instead unlocked two rows at a time. Additionally, later talents cost less Darkness, so any player who had darkness invested beyond what was required has now had that amount refunded. 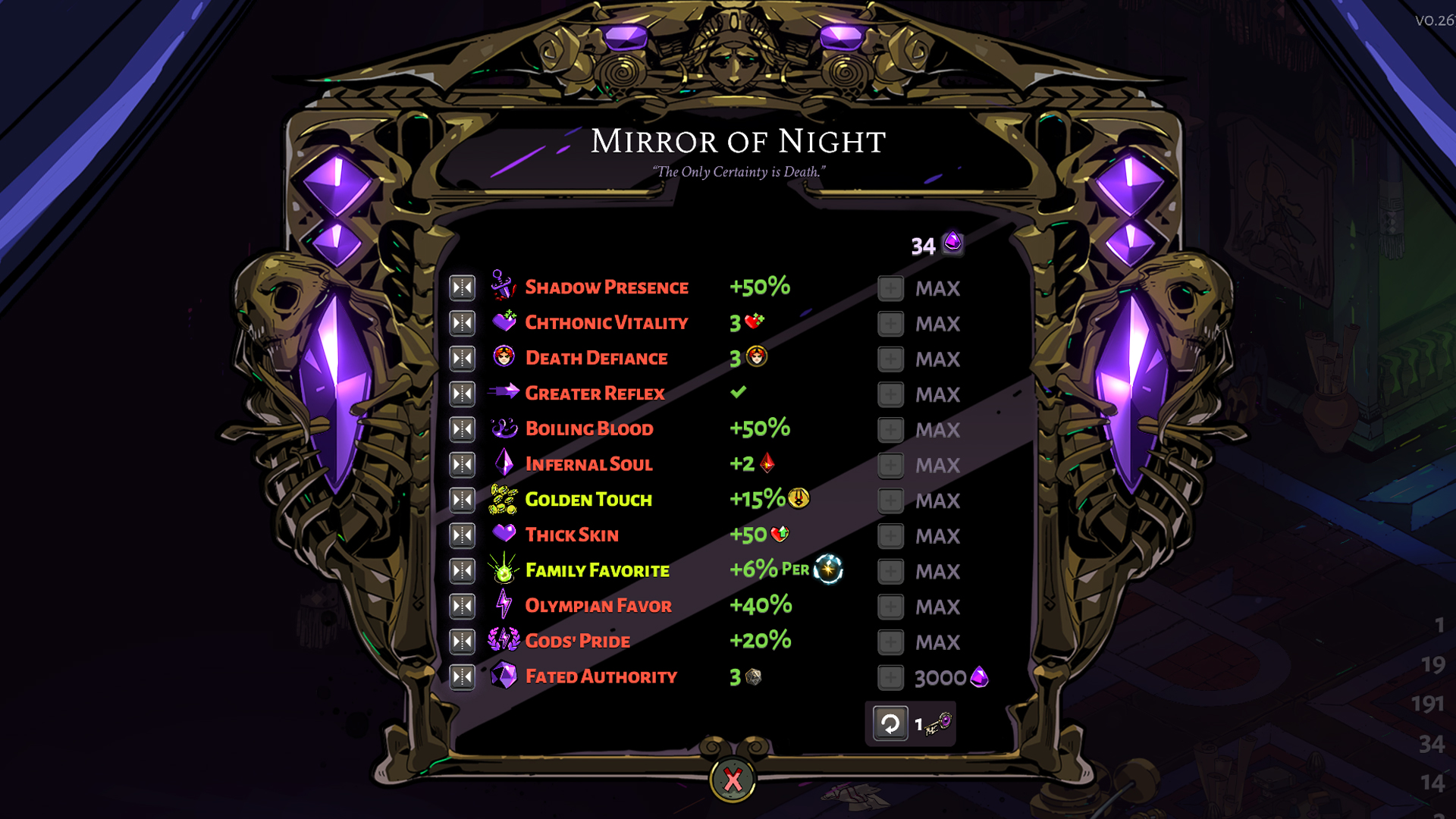 The update has also expanded on the story of Hades through new narrative moments with countless characters, with Nyx being the most predominate character to receive more narrative moments with Zagreus. Nyx is the latest character to receive an entirely new set of art which helps to bring significant visual diversity to the already amazing cast of characters. Players can find some additional story moments with Hades and Zagreus which will grand the ability to unlock the Administrative Chamber, giving access to Zag’s Permanent Record.

While there are far too many changes in the Nighty Night update to completely list here, the final new major addition is the Aspect of Arthur for the Stygian Blade. This new aspect gives yet another new playstyle option to players by allowing them to wield the might of the Holy Excalibur when they are done playing with the Twin Fists!

Hades is available in early access on both Steam and the Epic Games Store, and the Nighty Night update is available for free to all players. For more information on Hades, be sure to visit our wiki here!