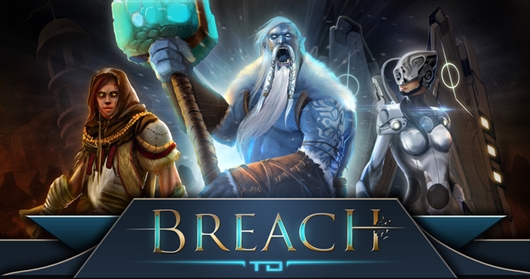 Breach TD is a next-generation tower defense game by Space Rhino Games. Take control of mighty Guardians and clash with Void forces in this new spin on the classic browser genre. Breach TD's playstyle follows the saying “the best defense is a good offense”, instead of building up a fortified position players organize armies and meet enemies half way for an all out brawl. Breach TD is literally taking the towers out of tower defense! Gamepedia is hosting a contest, sponsored by the game's developers, to give away some sweet backing privileges to creative fans!

Click "Read more" to learn more about the contest!

To celebrate the launch of Breach TD's Official Wiki, and to promote their growing Kickstarter, we’re hosting the Breach TD Guardian Concept Contest to give away some sweet backing perks:

ALL entrants to this contest will receive a Guardian Starter Pack upon release as a "thank you" for participating!

One Grand prize winner will receive the Maker of Heroes backing package, meaning they will get to work with the game’s developers to create their very own in-game Guardian (along with receiving a bunch of other neat swag from the developer):

To start your submission, fill out this submission form. For more information on this contest, visit our Official Wiki’s contest page! Judging will be done by the game's development team, and will be based on the ideas pertinence to the game's context, creativity, and originality. Winners will be notified via email a couple of weeks after Breach TD’s Kickstarter concludes on the 1st of June. Feel free to send any drawings or other art submissions to community@gamepedia.com with the subject line: Breach TD Guardian Contest.