Playing WildStar headstart, are ya, cupcake? Saturday marks the day that Carbine's highly anticipated, humorous MMORPG begins headstart and we want to make sure you're ready! The WildStar Wiki is the most comprehensive community driven resource out there and it has everything you need to be ready to hit the ground running the moment realms are up! We're putting together this handy walkthrough so you know exactly what is in the wiki and where to find it.

First things first. You're going to want to make a character. Not only does the WildStar Wiki have a breakdown on creating a character, but also the four points of information you need in order to go through the character creation process. These four points are deciding on faction, race, class and path. WildStar, in addition to having class levels to work on, also has an alternative leveling system through path choice. Choosing one you enjoy is just as important as playing a class you like! Let's break down the Character Creation process. 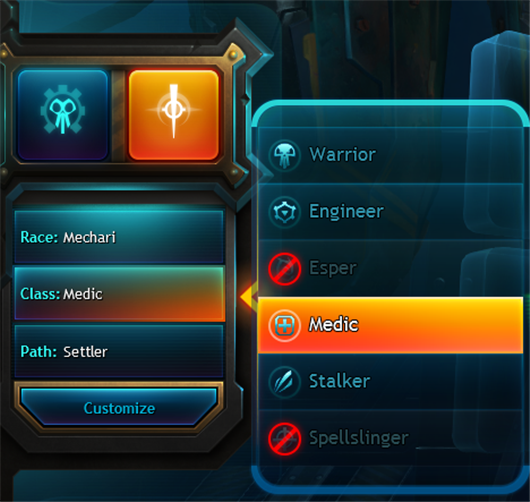 Putting together your character becomes easiest once you decide what class you want to play. What exactly that will be relies heavily on your playstyle. All classes in WildStar are viable for leveling, so you don't have to worry about going through growing pains of figuring out who you can play solo and who you can play in a group, or end up with a class you love playing, but hate your leveling build. WildStar, while it does have the "holy trinity" of MMOs (tank, healer, DPS), classes are all hybrids of sorts. Each one has assault, support, and utility functions, lending them to all be wanted in group and raid situations.

There are six classes in WildStar: Engineer, Esper, Medic, Spellslinger, Stalker and Warrior. This potentially gives us three different healer types, two different tanks and one DPS class that has fantastic support and utility capabilities. Even the healer and tank classes can put out good DPS, so do not think of classes in the classic sense of just these three roles.

Once you've figured out what kind of class you want to play, you can figure out race, which will lead to an easy faction decision. Take note that not all races can play all classes, which is why figuring out your class first, rather than falling in love with a certain race, is so hugely important! Keep in mind that there are no racial bonuses in WildStar, so the majority of choosing your race is cosmetic. For reference, check out this handy chart on the Character Creation page: 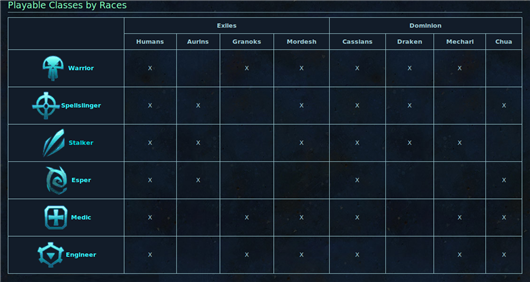 Once you've figured out that your calling is a Mechari Medic, you now know that you're born to fight on the side of the Dominion! Now there is only one last choice to make before you can dive into the final fun parts of picking out how your character looks and figuring out the perfect name: choosing your path.

Paths each have their own unique leveling route, along with path-specific quests and rewards. WildStar has four distinct paths to choose from: Explorer, Scientist, Settler and Soldier. Paths are not restricted from any class or race! The names of each path lend a good hand to knowing what to expect from each one. Explorers gain access to hidden areas in the game, many through platforming minigames. Scientists scan objects with their trusty robots, hack enemy databanks and conduct experiments. Settlers gather artifacts to build buffing stations and defenses. Soldiers rely on brute force to overcome their tasks. Choosing your path by what kind of side missions you'd prefer to do as you level your path is a safe bet to choosing a path you will enjoy as you level your character. 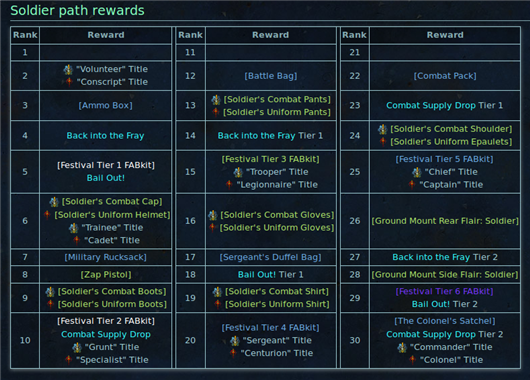 Each path has rewards for bags, path-specific gear, Fab Kits for your housing and titles. Paths also have abilities you can earn as you level the path. These do vary greatly. Scientists, for instance, can create portals to capital cities, while Soldiers have a group teleport to safety, should you and your group be in a situation that's too hot to handle! If you're having a hard time deciding which path to take on missions alone, go with the path that has abilities you want.

Each faction has a tutorial zone called the Arkship. Here, you'll get tips on basic gameplay functions, as well as introductions to different game systems, such as lore and quests. This will get you through your first few levels and get you the basic gear you need to get out into the world. During this time, it's also a good idea to get a grasp of basic parts of the game like the User Interface and the game's Attribute system and what these mean for your class. You'll also be introduced to your path here.

On your Arkship, you'll discover the basic premise for your faction through quests, which are also the base for the game's lore. Other ways to uncover lore in the game come from reading books you run across and hunting down Datacubes. A neat feature that WildStar has for Datacubes is that they also have voice overs. If you're not much of an in-game reader, you'll still have access to lore through the voice acting for Datacube lore.

WildStar also has collectable achievements and other fun stuff to keep track of, like quests, challenges, tradeskills and path progress. All of this is also accessible from your Codex window, which has tabs for each different category. An example of how the logs in the Codex works would be path progress, where you can see what all you've earned, how many missions you've completed, and how many missions you have left to discover.

WildStar offers a variety of quick travel methods, such as teleportation, taxis and mounts. You can discover terminals in towns where you can create a point that you can recall to. That's WildStar speak for being able to set a bind point to gate back to or hearth to at your convenience. Towns also have taxi systems to discover, which will allow for travel between points at super fast rates that are faster than mounts, but slower than teleporting. These also need to be discovered and unlocked. At level 15, you'll have access to mounts that are purchased for in-game currency.

In WildStar, there are two types of crafting available: tradeskills and hobbies. At level 10, you'll get a quest where you can pick up two of several offered tradeskills. Hobby crafts can be picked up by anyone and include cooking, which can be done at any campfire you run across in-game, and gardening, which can be done on your own time, if you add on a gardening plug to your personal housing plot. Housing in WildStar is also highly customizable!

Another way that WildStar is customizable is through allowing for addons. Did you know that Curse is the official partner for addons in WildStar? At WildStar at CurseForge, you'll have access to all addons available for WildStar at the convenience that Curse is known for! Want to keep up on the latest addons? Our sister site, WildStar Forums, does a weekly spotlight on addons. Check out the spotlight for this week: Junkit!

WildStar Forums is also the perfect place to stay up-to-date on all WildStar news, discuss WildStar with fellow fans and learn more about the game! WildStar Forums always has the latest patch notes, including the build that the game will be launching headstart with. Head over to this link to see what the latest additions were before we're all clamoring to log in the moment realms are up!

You might have noticed that throughout the WildStar Wiki there are videos that we have created to help illustrate certain points within WildStar. While you can certainly find these on different pages on the wiki, such as the page for the Granok race, our YouTube channel is the perfect place to see all of our custom WildStar videos in one place. Be sure to subscribe so you know when we have the latest videos for WildStar available for you!

Love WildStar and want to give back to the community? Every wiki at Gamepedia is built for and by the community. The WildStar Wiki is only as awesome as it is because of dedicated community members like yourself who enjoy sharing their knowledge with the rest of us! Want to contribute, but not sure where to start out? The Help Wiki is the perfect place to find out what all you can do, especially our new Help Wiki Highlights series, which go in-depth with all of the basics, such as editing, adding pages, writing guides and so much more!