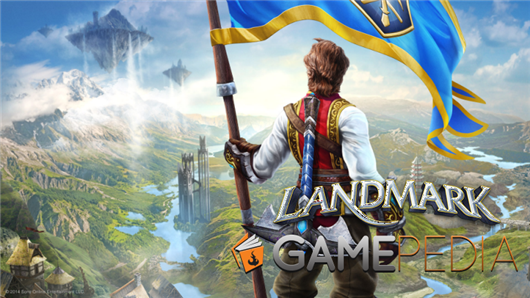 We've barely been able to contain ourselves lately with this news, and now we can happily say that Gamepedia has the Official Landmark Wiki! Because we are ridiculously excited about their official wiki coming to Gamepedia, we're throwing a contest to celebrate. Gamepedia, the leading community-driven gaming wiki resource and Landmark, Sony Online Entertainment's latest title in the long-running EverQuest franchise, will make an incredible partnership for anyone who's followed the game since its first whispers and those who have just found out about it. We cannot wait to see what the community will add to the wiki!

Our contest for the official wiki's launch, which is open to everyone around the world, includes three tiers of prizes, all of which include one of three Founder's Pack tiers. All tiers include the Feather In A Bottle in-game item, which allows the wearer to double jump. This item is only available through giveaways, such as this one, so you will not be able to obtain it in game otherwise! For third place, ten winners will get a Settler's Pack, also, which includes unrestricted closed beta access, forum and in-game title "Founder", Founder's Pickaxe, and a Settler Flag, which you are entitled to in EverQuest and EverQuest II, as well.

Five lucky winners will get Explorer's Packs. In addition to the Feather In A Bottle and what comes in the Settler's Pack, these five will also get an Explorer Flag (which is good for EverQuest/EverQuest II), a Ring of Bounty, a Mega Pocket for either your inventory or vault, Courtier's Regalia, and Tech Sergeant's Gear.

Not one, but three (!!!) super lucky winners will get a Feather In A Bottle and a Trailblazer Pack! The Trailblazer Pack has everything that the Founder and Settler packs have, but also a Trailblazer Flag that works in EverQuest and EverQuest II as well, a Mastercrafter Bracer, a Void Vault, Noble's Regalia, Tech Commander's Gear, 4 shareable and unrestricted closed beta keys for friends, and the player's name in Landmark credits!

What do you need to do to enter? Great question! Entering is super easy. Head on over to the contest page and enter -- that's it! Want a chance to earn more entries? We got you covered. Participating in social media through following Gamepedia on Twitter and YouTube, Liking Sony Online Entertainment on Facebook and getting connected with Landmark on Facebook and Twitter will grant you extra entries. Refer friends for even more!

Enter to win SOE's delightful world where you are the star, where you can build wonderful monuments, explore caves that go deep into the earth, enjoy the creations of others, and most importantly, have a chance to help build assets for EverQuest Next and sell items through the Player's Studio!

The Official Landmark Wiki is not just newly official, but it's new altogether. We hope you are as excited about its launch as we are! Enter for your chance to win one of the Founder's Packs we can't wait to give away to our community, check out EQNext Fans, where you can find all of the latest Landmark news, and be sure to keep an eye on the official wiki for all things Landmark. Want to be one of the hundreds of contributors who help by adding in content? Have a look at the Help Wiki to see how you can get started editing!