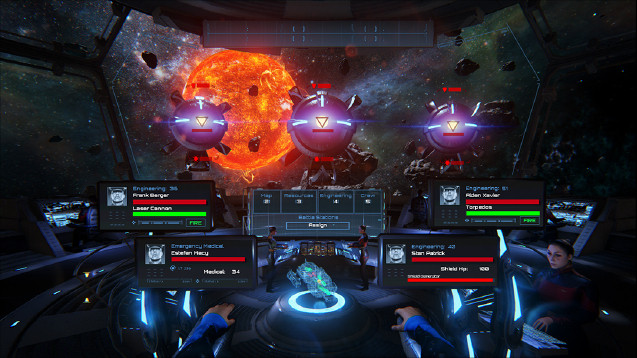 Into the Stars, a stunning open-world journey through a distant solar system, has only one day left in its Kickstarter campaign, and nearly 4,000 backers have already pushed the game well past its $85,000 goal. Developed by Fugitive Games, Into the Stars allows you to captain your very own ship and guide an inexperienced crew through the dangerous depths of space. The game has been Greenlit by the Steam Community and is expected to release this summer. We’ve partnered with the developers to bring you the Official Into the Stars Wiki, a bountiful resource for game information and updates.

Who has never envisioned themselves as a brave captain, making tough decisions from their seat on the bridge? Would you be a level-headed negotiator or an aggressive, alien-crushing leader? Well – here’s your chance to find out. In Into the Stars, you’ll command the Ark 13, the only human vessel remaining after 10 years of brutal, devastating alien attacks. Your crew is inexperienced, the terrain is unknown, and it’s all on your shoulders. You’ll need to evade enemies, gather resources, and monitor the conditions of your entire crew and the civilians aboard your ship. Game features include:

To learn more about the game, check out the Kickstarter Trailer below. You can also view an additional trailer and learn about the game’s soundtrack on the Fugitive Games YouTube Channel.

Ready to take the helm and disappear Into the Stars? Me too. Let’s head over to Kickstarter and become backers before the campaign ends tomorrow at 9:15 am EST. There are tons of backer-exclusive gifts, including a digital art book, additional game copies, recognition in the game credits, and more. Follow the developers on Facebook and Twitter to receive updates on the game’s progress, and stop by the Official Into the Stars Wiki to learn more about this beautifully-designed, immersive title.