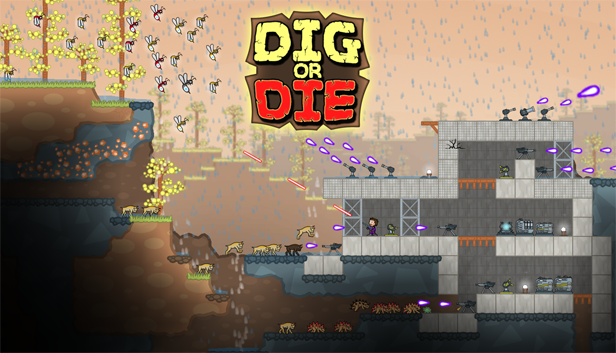 Available today on Steam Early Access, Dig or Die is a sandbox action/strategy game with dangerous monsters, realistic physics, and a unique water cycle. Forget magic spells and wizards - Dig or Die is all about science fiction, and you’ll use lasers and turrets to combat your foes. The developer, Gaddy Games, is utilizing a unique pricing structure for Early Access. To put it simply - the earlier you buy, the less you pay. We’re proud to present the Official Dig or Die Wiki, a growing resource for discovering more about this indie title.

In Dig or Die, you play a representative of the CRAFT and Co company. You travel the galaxy selling the latest automated fabrication tools when, in a tragic accident, your spacecraft crashes onto a hostile planet. You’ll use resources from your ship and the world around you to build a base, survive against dangerous enemies, and eventually escape the planet. Dig or Die is a science fiction game, meaning there are no swords, magic, or bearded wizards. Additional game features include:

To see the game features in action, check out the Official Early Access trailer below.

Gaddy Games is introducing a unique pricing structure for Dig or Die’s Early Access on Steam. You’ll only pay for the content that is currently available, meaning the price of the game goes up with every update. The game will start at only $3 and will retail for $12 once it’s officially released. Time is of the essence, so make sure to purchase Dig or Die as soon as it becomes available later today. To stay up-to-date on game news, follow the developers on Facebook and Twitter. If you’re interested in learning more about the game or sharing your Dig or Die knowledge, stop by the Official Dig or Die Wiki.