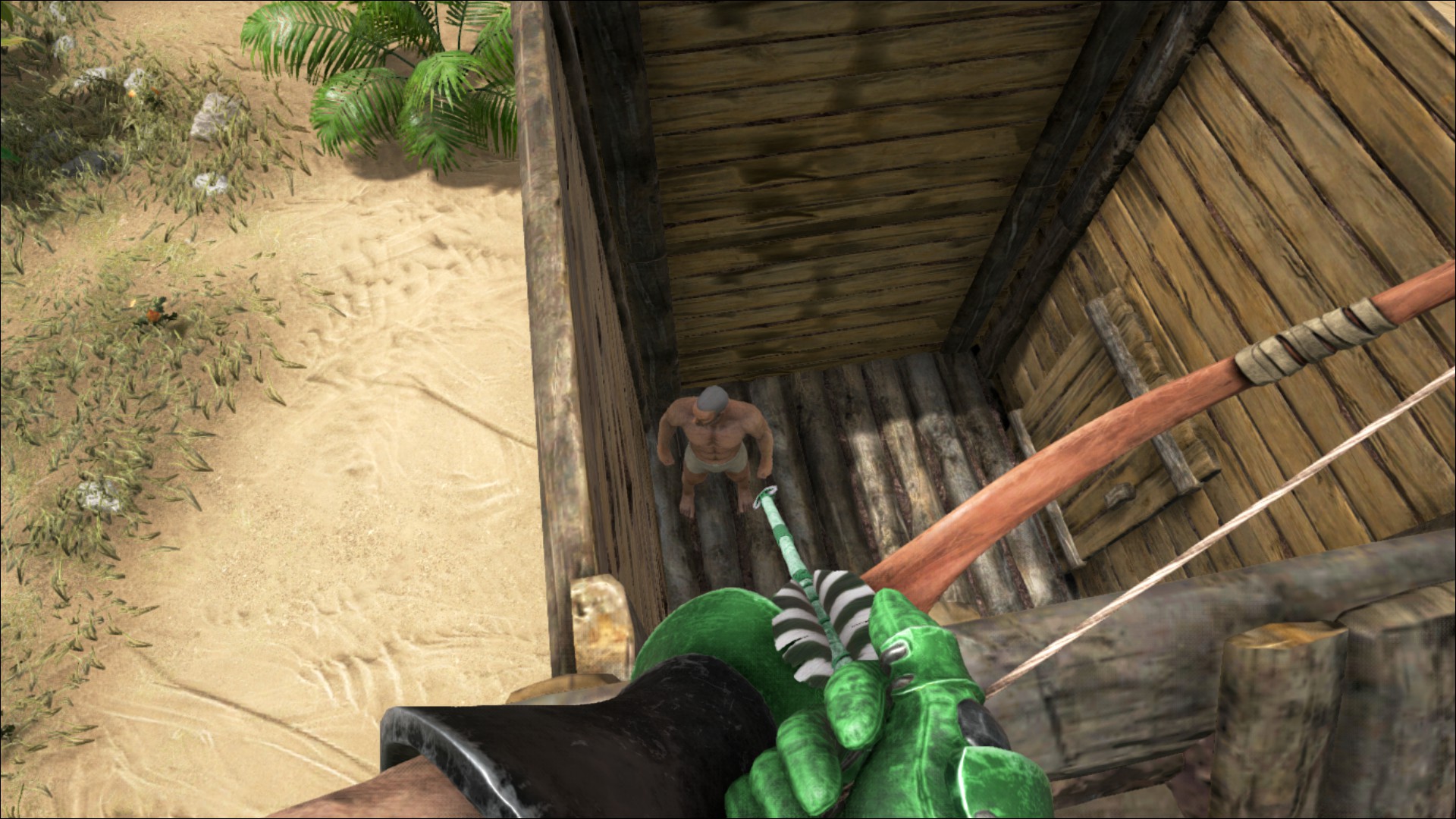 The battles, raids, and dino wars between rival Tribes in ARK often make for great stories. Whether on the Steam forums or the ARK subreddit, many players have taken to sharing their experiences with others. In one tale, Redditor u/FrozenBirdie recounted holding two prisoners hostage for killing their Tribemate's Brontosaurus. This article provides a first-person narrative of the events of that evening.

This article is a part of ARK Tribe Week, a five day promotion surrounding Tribes in ARK and the new Tribe Directory on the Official ARK Wiki.

How long had it been since last night? Since Rorrick tamed the Bronto? It had taken him over five hours to tame her, but it was well worth the effort. As one of the largest creatures on the island, she was the perfect addition to the Tribe’s growing collection. She was magnificent. I still can’t believe she’s gone.

Only hours after acquiring the Bronto, we lost her. Two strangers from a rival Tribe managed to attack her with arrows and kite her into the ocean. We had no idea what was happening before it was too late. If only we had been faster, we could have saved her… but by the time we reached the shoreline, there was nothing we could do. We stood powerless in the darkness as she drowned under the waves. I remember feeling the tide rush in around my feet, but I couldn’t move my eyes from the water’s surface. None of us could. The sadness of our loss was buried beneath rage and anger; now, we were on a quest for vengeance.

Without waiting for daylight, we hunted. Not for dinosaurs or insects or birds – not for any kind of creature. We hunted the strangers. We knew they hadn’t ventured far, and our tracking skills made us fearsome predators. A group of us strode quietly into the jungle, our eyes quickly adjusting to the absence of moonlight. I picked up their trail almost immediately, and it wasn’t long until we found them arrogantly crouching against the cliffside. They had sly grins on their faces, but I could detect a hint of terror in their eyes; they knew there was no escape. A quick death was too generous, and, in the end, it wasn’t up to me to decide how to punish them. It was Rorrick’s decision. He was gone on a supply run, and we had no idea when he’d be back. We needed a way to secure the prisoners in the meantime.

I smiled as I recalled our next actions: Tranquilizing the killers, constructing two wooden prisons on the beach, and dropping a captive inside each one. We’d stripped them of their resources and their dignity – the smirks that rested on their faces earlier had melted into expressions of despair. Small, isolating cages have a sobering effect on smug fools.

I stood watch atop one of the prisons and looked down at the hostage. His eyes flicked up to me, and he leaned against the wall behind him. He was contemplating something. Minutes ticked by, and his breathing became rapid and shallow. Suddenly, his body lurched forward, and he began to relentlessly pummel the wooden wall in front of him. Over and over, each punch was a desperate attempt to not be taken alive. Blood began to smear his arms and fists. He wanted to escape this confining box – even if it meant death.

I rolled my shoulders casually and flexed the arrow in my fingertips. With a deep breath, I lifted my bow from my side and tranquilized the desperate captive. I’d shot him plenty of times already, and I’d continue to do so until Rorrick returned. Anything to keep this Bronto killer imprisoned. The rising sun scorched the back of my neck as I stared down into the cage; it was nearing afternoon now. A frantic yelling sound a few paces away, followed by the whisper of a shooting arrow, informed me that the other prisoner was now sedated as well. As the ocean breeze cooled my arms and face, I looked towards the base. Where was Rorrick? How long had it been since last night?

This narrative was based on this Reddit post by u/FrozenBirdie. Has your Tribe ever taken an enemy captive? Let us know in the comments below or tweet us at @CurseGamepedia.